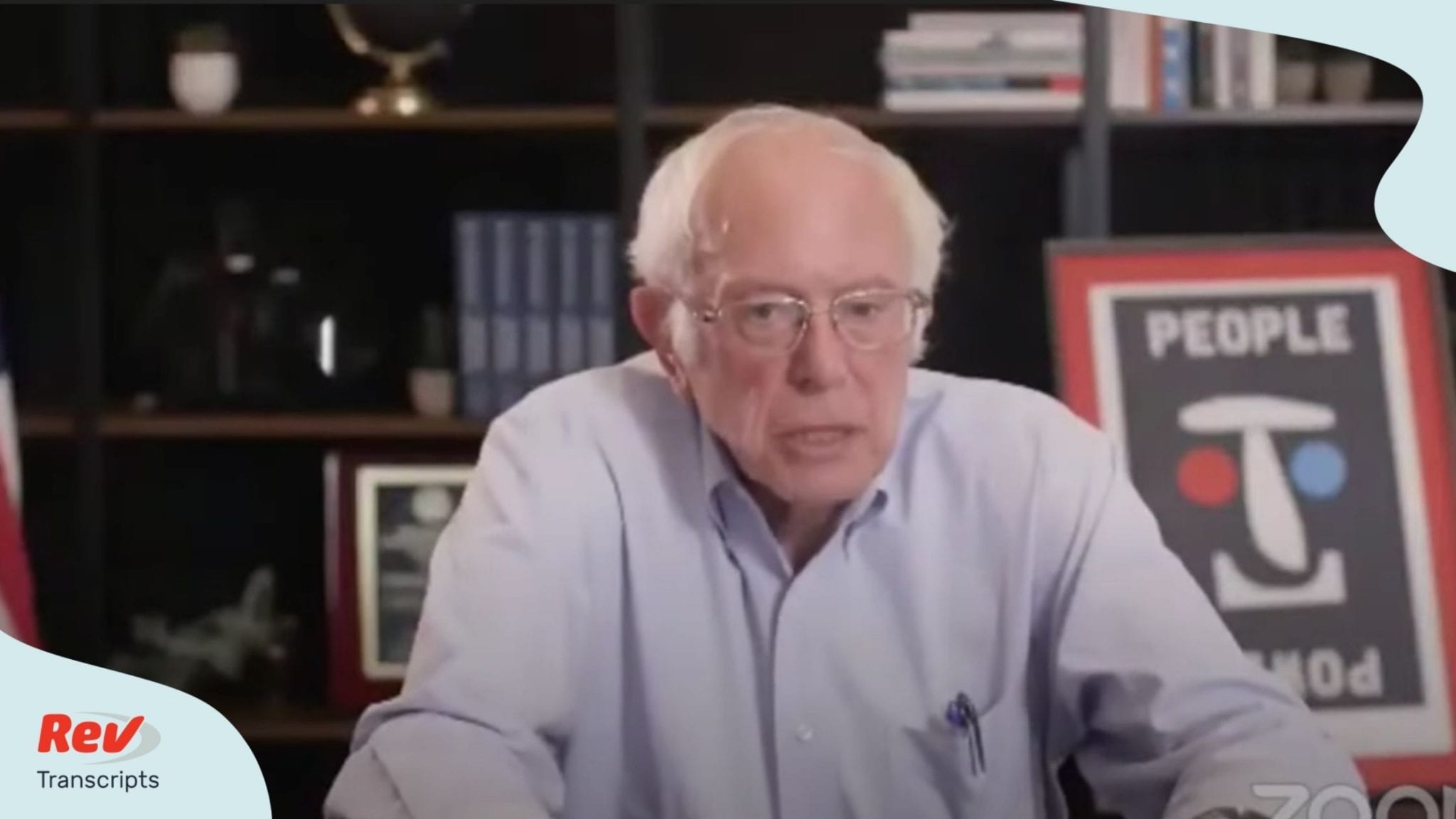 Bernie Sanders joined the Sunrise Movement virtually on June 22 to speak about organizing and continuing the progressive movement. He said: “The truth is that my generation has left you a planet that is becoming increasingly unhealthy and uninhabitable”. Read the transcript here.

Bernie Sanders: (00:01)
Let me thank the Sunrise Movement for the extraordinary work that you guys are doing. Thank you. The truth is that my generation has left you a planet that is becoming increasingly unhealthy and uninhabitable, and it is your generation that is going to save us all. So I just want to thank you for the great work that you are doing.

Bernie Sanders: (00:30)
We are living, as I think all of you know, in an unprecedented moment in American history. There’s never been a moment like this, ever. We’re looking at a pandemic which has claimed 140,000 lives already, and it is getting worse. We’re looking at an economic meltdown, which has cost us tens of millions of jobs. Unless we change things, and together we will change things, it’s going to be harder for you guys to get decent jobs when you get out of school. And that’s wrong. We are living in a moment where millions of people are standing up to fight systemic racism in all of its forms and police brutality and police murders.

Bernie Sanders: (01:17)
Then on top of all of that, you got a President who is clearly unfit for the job. And then why don’t we throw in the issue that brings us all together, is that the scientists are telling us that if we don’t get our act together with regard to climate change, we don’t know what kind of planet your kids and grandchildren are going to be living in. But we do know that within the next few years, there will be irreparable, underline irreparable, damage to this planet. Last five years, five warmest years on record. A few weeks ago in Siberia, the coldest region on Earth, temperature reached 100 degrees Fahrenheit. Report that just came out today that says everything being equal, if we don’t transform our energy system, we’re going to be looking at significant increases in temperature in years to come.

Bernie Sanders: (02:23)
So what does that mean? What it means, bottom line, is that we need a political revolution in every sense of the word. We need to fight for an economy that works for working people, not just the very wealthy, and we must end the disgrace of an unprecedented level of income and wealth inequality. Does anybody think it makes sense three people own more wealth than the bottom half of America? Anybody think it makes sense that during this pandemic when millions of people are struggling to put food on the table, worried about getting evicted from their homes, richest people in this country are becoming phenomenally richer? People like Jeff Bezos, owner of Amazon. The Walton family making billions and billions of dollars during the pandemic. That’s got to end. Does anybody think it makes sense that we are the only major country on Earth not to guarantee healthcare to all people as a human right while we’re spending twice as much per person on healthcare as the people of any other country?

Bernie Sanders: (03:30)
You guys, the younger generation, are the future of America. You should not have to go deeply into debt in order to get a higher education. That is why we’re going to continue the fight to make public colleges and universities tuition-free and cancel all student debt.

Bernie Sanders: (03:51)
Does anybody think it makes sense that we have more people in jail than any other country on Earth because we have a racist and broken criminal justice system? Or we have an incredibly unjust immigration system, in which so many people are living in fear of deportation today, which is why we’re going to move toward comprehensive immigration reform and a path towards citizenship.

Bernie Sanders: (04:15)
So what all of this is about is growing a progressive movement that understands that we need an economy that works for all, not the few; that we need an educational system which encourages and makes it possible to all people to get the quality education that they need; that we have a healthcare system in which healthcare is a human right, not a privilege; and that we move forward with a Green New Deal to create millions and millions of good paying jobs, including jobs that I want your generation to have to transform our energy system away from fossil fuel to energy efficiency and sustainable energy.

Bernie Sanders: (05:03)
Now, to make any of these things happen, what we have got to do is take on very powerful special interests. That is the fossil fuel industry. That is the healthcare industry. That is the military-industrial complex. That’s the prison-industrial complex. That is Wall Street and these big financial institutions. What we need to understand is that real change never takes place from the top on down, it is only when millions of people stand up for justice. And that is what the Sunrise Movement is all about. That is what you are fighting for right now. You’re fighting to make sure, that among many other things, the planet that we live in, and our kids and grandchildren will live in, is a healthy and habitable planet.

Bernie Sanders: (05:56)
But to do that, we’re going to have to take on the greed and the lies and the irresponsibility of the fossil fuel industry. That’s what we’re going to have to do. We can’t address the crisis of climate change unless we take on the fossil fuel industry in this country and around the world because this, obviously, is not an American issue, it is a global issue. As I think all of you know, we are making progress as a result of your efforts in college and university. At the college and university, boards of directors of those schools are divesting from the fossil fuel industry. We are working with Vice President Biden on a program to see a very significant increase in energy efficiency and sustainable energy. And we’re blunt. We want to see the United States lead the world in this effort because we have to bring people together.

Bernie Sanders: (06:58)
So, let me just conclude by saying this. We need right now to transform this country in so many respects, and we will not do it unless there is a political revolution. There will not be a political revolution unless millions of young people participate in the political process and stand up and fight for justice. The very good news is that the younger generation in America today is, in my view, the most progressive generation in the history of this country. Your generation is anti-racist, anti-sexist, anti-homophobia, anti-xenophobia, anti-religious bigotry, and your generation understands that we have to transform our energy system away from fossil fuel. That is the very good news. It’s something that all of us, you and your parents and everybody else, should be very proud of.

Bernie Sanders: (08:05)
But here is the bad news. Your generation does not vote in as high in numbers as it should. So in the next three, three and a half months, as we move toward the presidential election, it is absolutely imperative that we defeat Donald Trump and that we elect progressive candidates from the local, state, and federal level. We need your help to do that. If young people come out in large numbers, I am absolutely confident that Donald Trump will be history and that we’re going to elect progressives all across this country. But talk is cheap. Action is what matters. So I urge you to reach out to your friends, reach out to your neighbors, your fellow students. Let’s get involved. Let’s stand up for justice. Let’s transform this country and have a government and an economy that works for all of us, not just the few.

Bernie Sanders: (09:11)
So, Sunrise, thank you so much for what you’re doing. I look forward to working with you in the months and years to come. Thank you all very much.