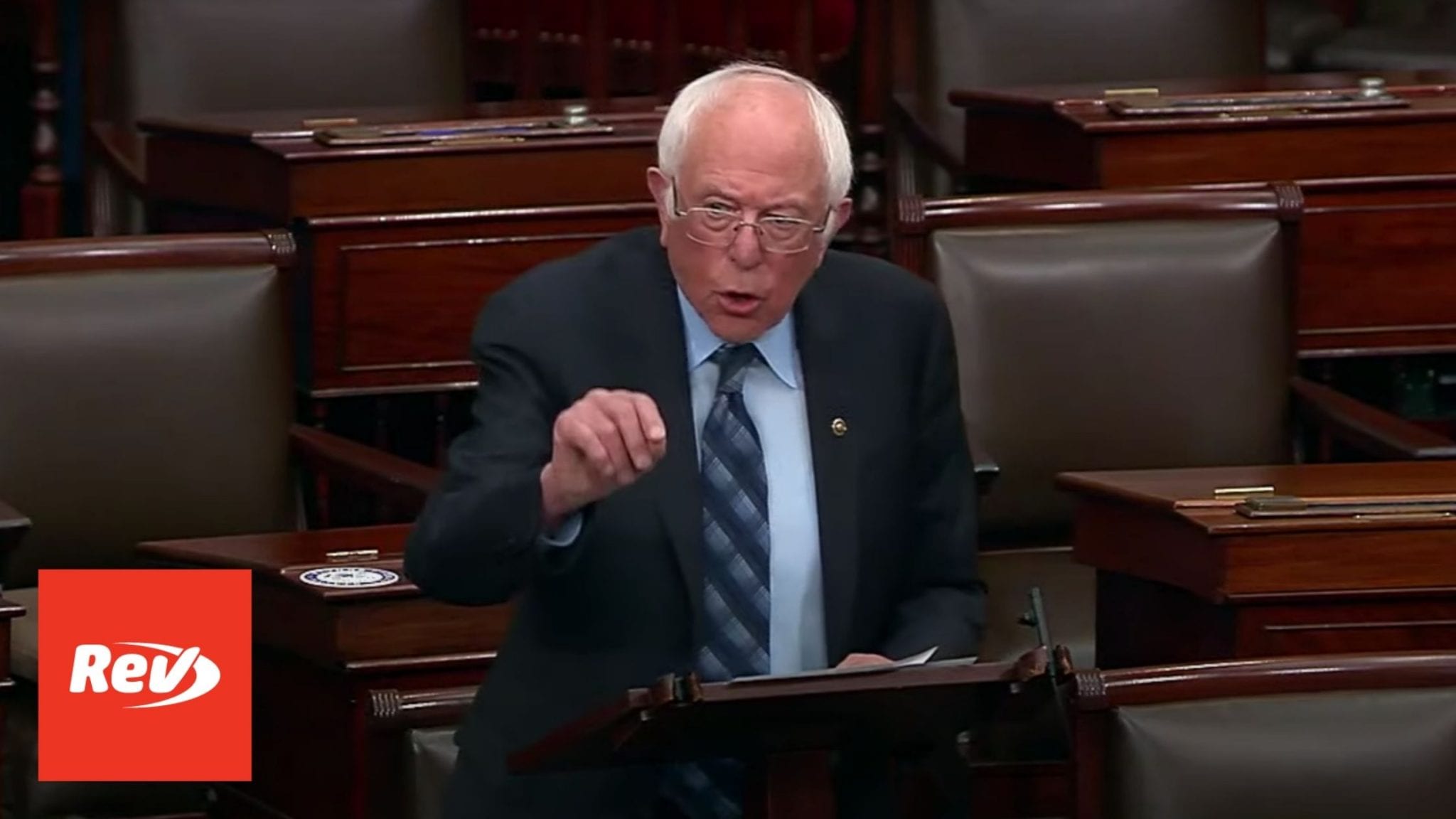 Senator Bernie Sanders gave a speech on the Senate floor on May 19, 2021 to address the conflict between Israel and Gaza. He introduced a resolution for immediate ceasefire. Read the transcript of the speech remarks here.

Bernie Sanders: (00:02)
Reserving the right to object. And I will object to the unanimous consent requests by Senator Scott and offer my own resolution. Unlike Senator Scott’s resolution, mine is short and to the point, and I think it expresses the feelings of the overwhelming majority of people in our country, and in fact, throughout the world. And this is what our resolution says. Quote, “Whereas every Palestinian life matters and whereas every Israeli life matters, now, therefore, be it resolved that the Senate urges and immediate ceasefire to prevent any further loss of life and further escalation of conflict in Israel and the Palestinian Territories, and supports diplomatic efforts to resolve the Israeli Palestinian conflict, to uphold international law, and to protect the human rights of Israelis and Palestinians.”

Bernie Sanders: (01:24)
I would also like to point out that those of us who are supporting an immediate ceasefire are certainly not alone. We joined with nearly unanimous call from the European Union with United Nations Secretary General, Antonio Guterres, with Pope Francis, and with many others. In other words, all over the world. People are seeing the terrible tragedy that is taking place in the region and they want an end to it as quickly as possible through a ceasefire.

Bernie Sanders: (02:03)
Now I happen to have read Senator Scott’s resolution and I was particularly struck by one sentence in it on page two. And what it says, and I quote, “The Senate mourns loss of innocent life caused by Hamas’ rocket attacks.” End of quote. That was on page two. Now, I certainly agree with that. And I think every member of Congress agrees with that. The loss of 12 innocent Israeli lives is in fact a tragedy.

Bernie Sanders: (02:45)
But what about the loss of 227 Palestinian lives, including 64 children and 38 women. Does Senator Scott not believe that the loss of those Palestinian lives, 64 children and 38 women, among others, is not a tragedy? I believe that we should be mourning the loss of Israeli life, but we should also be mourning the loss of Palestinian lives. Or perhaps some people think that Palestinian lives don’t matter. I would hope not. And let us be very clear that when we talk about the tragedy that is now taking place in Gaza, what we are talking about is not only the terrible loss of life. As I hope most people know, Gaza before this war, was an extremely poor and desperate community. And the latest Israeli bombardment has only made a bad situation, much, much worse. Let us remember, Gaza has been under a blockade since 2007 imposed by Israel and Egypt. Most people are unable to leave. Basic necessities are extremely hard to obtain.

Bernie Sanders: (04:34)
Gaza is the home to about 2 million inhabitants. Its population density is among the highest in the world. Just a huge amount of people squeezed into a very small area. More than a half of a population of Gaza, some, 56% live below the poverty line. 70% of the population is receiving aid according to estimates by the United Nations. Food rations constitute most of that aid. Unemployment in Gaza is around 45%. 48% of the population is under the age of 18 and 70%, let me repeat, 70% of the young people in Gaza are unemployed with no hope for the future. And because of this war, the bombardment from Israeli planes, the situation has gotten even worse.

Bernie Sanders: (05:51)
Today’s New York Times reports that the Israeli bombardment has and I quote, this is from the New York Times, “Damaged 17 hospitals and clinics in Gaza.” 17 hospitals and clinics have been damaged. “The bombardment has wrecked its only coronavirus test laboratory, sent fetid wastewater into the streets, and broke water pipes serving at least 800,000 people. Sewage systems inside Gaza have been destroyed. A desalination plant that helped provide fresh water to a quarter of a million people in the territory is offline. Dozens of schools have been damaged or closed, forcing some 600,000 students to miss classes. Some 72,000 Gazans have been forced to flee their homes.” End quote. That’s from the New York Times this morning. Perhaps the situation has gotten even worse. I don’t know.

Bernie Sanders: (07:03)
And I want everybody to think for a moment what it means to be living in a very small territory with dozens and dozens of planes attacking and bombing. What does it mean in particular to the children of Gaza? Jess Ghannam, a professor of psychiatry at the University of California San Francisco, who specializes in the psychological effects of armed conflict on children, told USA Today, and I quote, “What children in Gaza are exposed to on a regular basis exceeds anything, anything that any children, anywhere else in the world experience. There’s basically no place to go for these children. They are unable to escape.” End of quote.

Bernie Sanders: (07:59)
When you put people under this sort of continued intense pressure with no hope for a better future, you cannot be surprised when violence erupts. Indeed three years ago in May of 2018, I wrote a letter with 12 of my colleagues urging the Trump administration to do more to alleviate the ongoing humanitarian crisis in Gaza. In that letter, we cited Israeli defense officials, Israeli defense officials, who were wanting that if the crisis was not addressed, it could lead to yet another eruption of violence. Why didn’t we take notice then? And when this latest war ends, will the United States, once again, turn away? Will we consign those children, once again, to the horrible conditions they are forced to live under today? And I would hope that my colleagues appreciate that we must not do that.

Bernie Sanders: (09:50)
Now, why is that? Let us understand that one of a Hamas’ goals is to show Palestinians that they represent the real resistance to the occupation. Senator Scott’s resolution would help them do just that. By making this all about Hamas, Hamas, Hamas, Senator Scott is effectively echoing Hamas’ own argument. That Hamas is the true face of Palestinians struggle. And I reject that. Because my friends day after day, year after year, decade after decade, non-violent Palestinian activists struggle against the daily violence and harassment of occupation. Violence and harassment subsidized, by the way, with billions of US taxpayer dollars.

Bernie Sanders: (10:53)
Let us be very clear. No one is arguing that Israel or any government does not have the right to self-defense and the responsibility to protect its people. We should understand that, while Hamas firing rockets into Israeli communities is absolutely unacceptable, today’s conflict did not begin with those rockets. It goes much, much deeper. For years, we have seen a deepening Israeli occupation in the West Bank and East Jerusalem and a perpetual blockade on Gaza, all of which makes life increasingly unbearable for the Palestinian people. The truth is these policies, like this current war, will continue to strengthen, to strengthen, extremists on both sides, including Hamas. You want to strengthen Hamas, support this war.

Bernie Sanders: (12:06)
We, Congress, must understand that in more than a decade of his right wing rule in Israel, Benjamin Netanyahu has cultivated an increasingly intolerant and authoritarian type of racist nationalism. In his frantic effort to stay in power and avoid prosecution for corruption, Netanyahu has legitimized extremist forces, such as the Jewish Power Party, by bringing them into the government.

Bernie Sanders: (12:43)
Moreover, we should understand that these dangerous trends on not unique to Israel. What was going on, what is going on in Israel, in my view as a political tragedy, but it is part of a trend that is going on around the world, including here in the United States, where we are seeing the rise of authoritarian nationalist movements. These movements exploit ethnic and racial hatreds in order to build power for a corrupt view rather than prosperity, justice, and peace for the many. For the last four years, these movements have had a friend in the Trump White House and on January 6th, those forces attacked this very chamber.

Bernie Sanders: (13:41)
Madam President, it is no accident that the only European Union country that did not join the nearly unanimous statement yesterday, calling for a ceasefire, was Hungary. Hungary did not join the rest of the European Union. And Hungary of course is led by the ethno nationalist authoritarian, Viktor Orban, a strong ally of both Netanyahu and Donald Trump.

Bernie Sanders: (14:14)
Now, some may choose to be on that side, but that is not the side I choose to be on. We must be on the side of those who want to build a society based on real security and political equality, based upon the principles of economic justice, racial justice, political justice, social justice, and environmental justice. I believe we must stand in solidarity with those Palestinians and Israelis working to build a future of equality and peaceful coexistence, and not with the intolerance extremists on either side who wish to destroy that future.

Bernie Sanders: (15:09)
In this moment of crisis, the United States should be urging an immediate ceasefire. My colleagues, I strongly believe that the United States has a major role to play in helping the world build a more peaceful and prosperous future, one in which human rights are upheld and the life of every human being is valued. We should be leading the world in combating the existential threat of climate change. We should be leading the world in making sure that every person on earth, no matter what country he or she lives in, receives a vaccine to protect them from the COVID-19 virus. And yes, we should lead the world in attempting to bring the Israeli people and the Palestinian people together. If the United States is going to be a credible voice on human rights on the global stage, we must recognize that Palestinian rights matter, Palestinian lives matter.

Bernie Sanders: (16:25)
Madam President, I object to the Scott resolution.