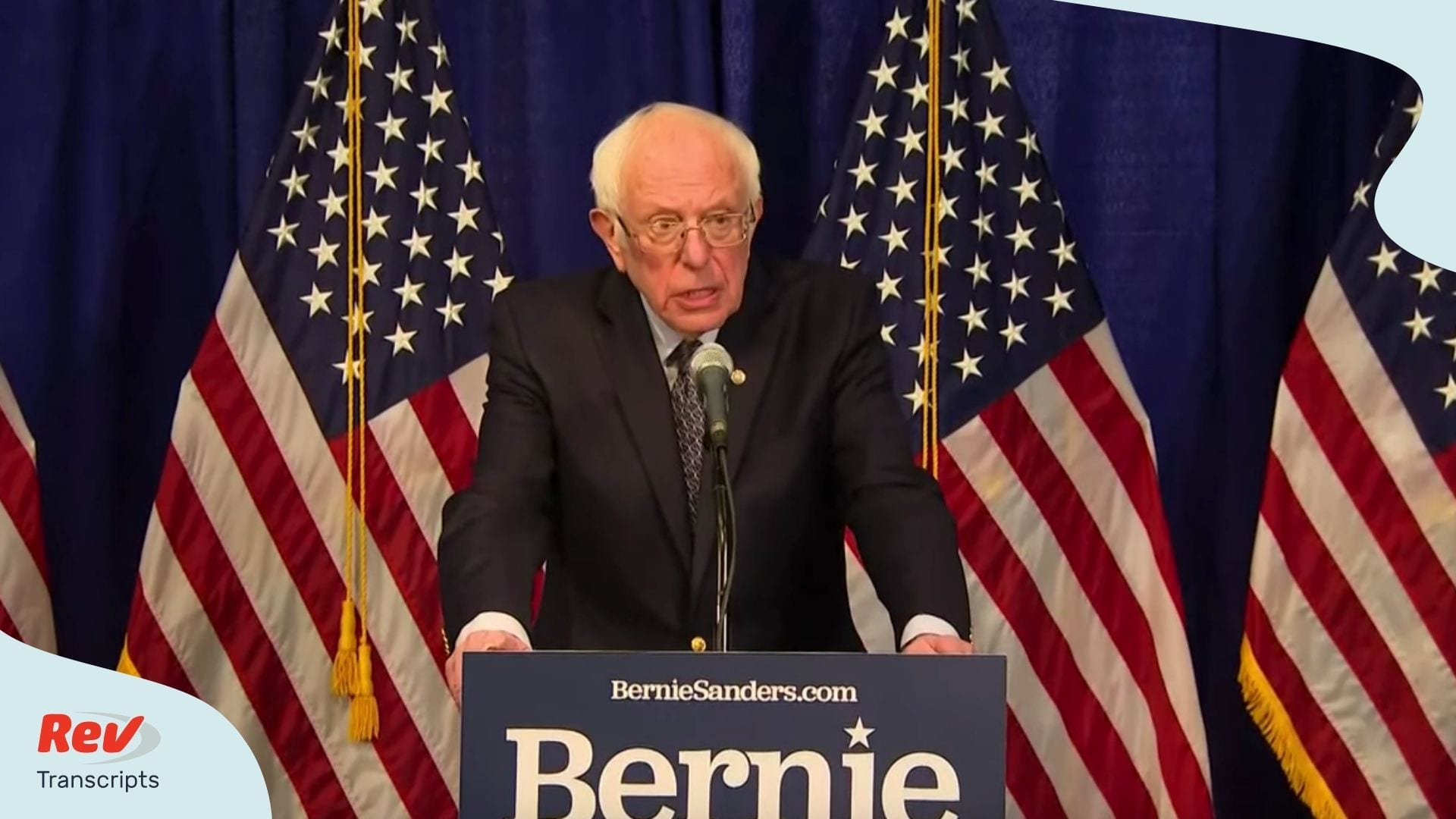 Bernie Sanders announced today that he plans to stay in the presidential race despite losses to Joe Biden in key Democratic primaries yesterday. Read the full transcript of his March 11 speech.

Bernie Sanders: (05:56)
Let begin by reiterating what I have said from day one of this…

Bernie Sanders: (06:01)
… tragically defeated. Tragically, we have a president today who was a pathological liar and who is running a corrupt administration. He clearly does not understand the Constitution of the United States and thinks that he is a president who is above the law. In my view, he is a racist, a sexist, a homophobe, a xenophobe, and a religious bigot, and he must be defeated. And I will do everything in my power to make that happen.

Bernie Sanders: (06:49)
Last night obviously was not a good night for our campaign from a delegate point of view. We lost in the largest state up for grabs yesterday, the state of Michigan. We lost in Mississippi, Missouri and Idaho. On the other hand, we won in North Dakota and we lead the vote count in the state of Washington, the second largest state contested yesterday with 67% of the votes having been counted. We are a few thousand votes on top.

Bernie Sanders: (07:25)
What became even more apparent yesterday is that while we are currently losing the delegate count, approximately 800 delegates for Joe Biden and 660 for us, we are strongly winning in two enormously important areas which will determine the future of our country. Poll after poll, including exit polls show that a strong majority of the American people support our progressive agenda.

Bernie Sanders: (08:03)
The American people are deeply concerned about the grotesque level of income and wealth inequality in this country, and the American people want the wealthy and large profitable corporations to start paying their fair share of taxes. Overwhelming support for that.

Bernie Sanders: (08:23)
The American people understand that the federal minimum wage of $7.25 an hour is a starvation wage. They want to raise the minimum wage in this country to a living wage of at least $15 an hour.

Bernie Sanders: (08:38)
And the American people understand that our kids are going to make it into the middle-class of this country, we must make public colleges and universities and trade schools tuition-free.

Bernie Sanders: (08:52)
The American people understand that cannot continue a cruel and dysfunctional healthcare system. And it is amazing to me to see that even in conservative states like Mississippi, there is an overwhelming understanding that we are now spending twice as much per capita on health camp as do the people of any other country. While 87 million of us remain uninsured or underinsured. And this crisis, this absurd healthcare system is becoming more and more obvious to the American people as we face the challenge of the coronavirus pandemic that we are currently experiencing. Imagine facing a pandemic and having 87 million people who are having a difficult time going to a doctor when they need it.

Bernie Sanders: (09:48)
And the American people know, unlike Donald Trump, that climate change is an existential threat to our country and the planet, and that we need to transform our energy system away from fossil fuel to energy efficiency and sustainable energy.

Bernie Sanders: (10:05)
And the American people also know that we need fundamental transformation of a broken and racist criminal justice system as well as a cruel immigration system that keeps millions of people living in fear.

Bernie Sanders: (10:23)
But it is not just the ideological debate that our progressive movement is winning. We are winning the generational debate. While Joe Biden continues to do very well with older Americans, especially those people over 65, our campaign continues to win the vast majority of the votes of younger people. And I am talking about people not just in their 20s but in their 30s and their 40s. The younger generations of this country continue in very strong numbers to support our campaign. Today I say to the democratic establishment, in order to win in the future, you need to win the voters who represent the future of our country, and you must speak to the issues of concern to them. You cannot simply be satisfied by winning the votes of people who are older.

Bernie Sanders: (11:37)
While our campaign has won the ideological debate, we are losing the debate over electability. I cannot tell you how many people our campaign has spoken to who have said, and I, “I like what your campaign stands for. I agree with what your campaign stands for, but I’m going to vote for Joe Biden because I think Joe is the best candidate to defeat Donald Trump.” We have heard that statement all over this country. Needless to say, I strongly disagree without assertion. But that is what millions of Democrats and Independents today believe.

Bernie Sanders: (12:26)
On Sunday I very much look forward to the debate in Arizona with my friend Joe Biden. And let me be very frank as to the questions that I will be asking Joe.

Bernie Sanders: (13:25)
Joe, how are you going to respond to the scientists who tell us we have seven or eight years remaining to transform our energy system before irreparable harm takes place to this planet because of the ravages of climate change? Joe, at a time when most young people need a higher education to make it into the middle class, what are you going to do to make sure that all of our people can go to college or trade school regardless of their income? And what are you going to do about the millions of people who are struggling with outrageous levels of student debt?

Bernie Sanders: (15:13)
So let me conclude the way I began. Donald Trump must be defeated, and I will do everything in my power to make that happen. On Sunday night in the first one-on-one debate of this campaign, the American people will have the opportunity to see which candidate is best positioned to accomplish that goal. Thank you all very much.