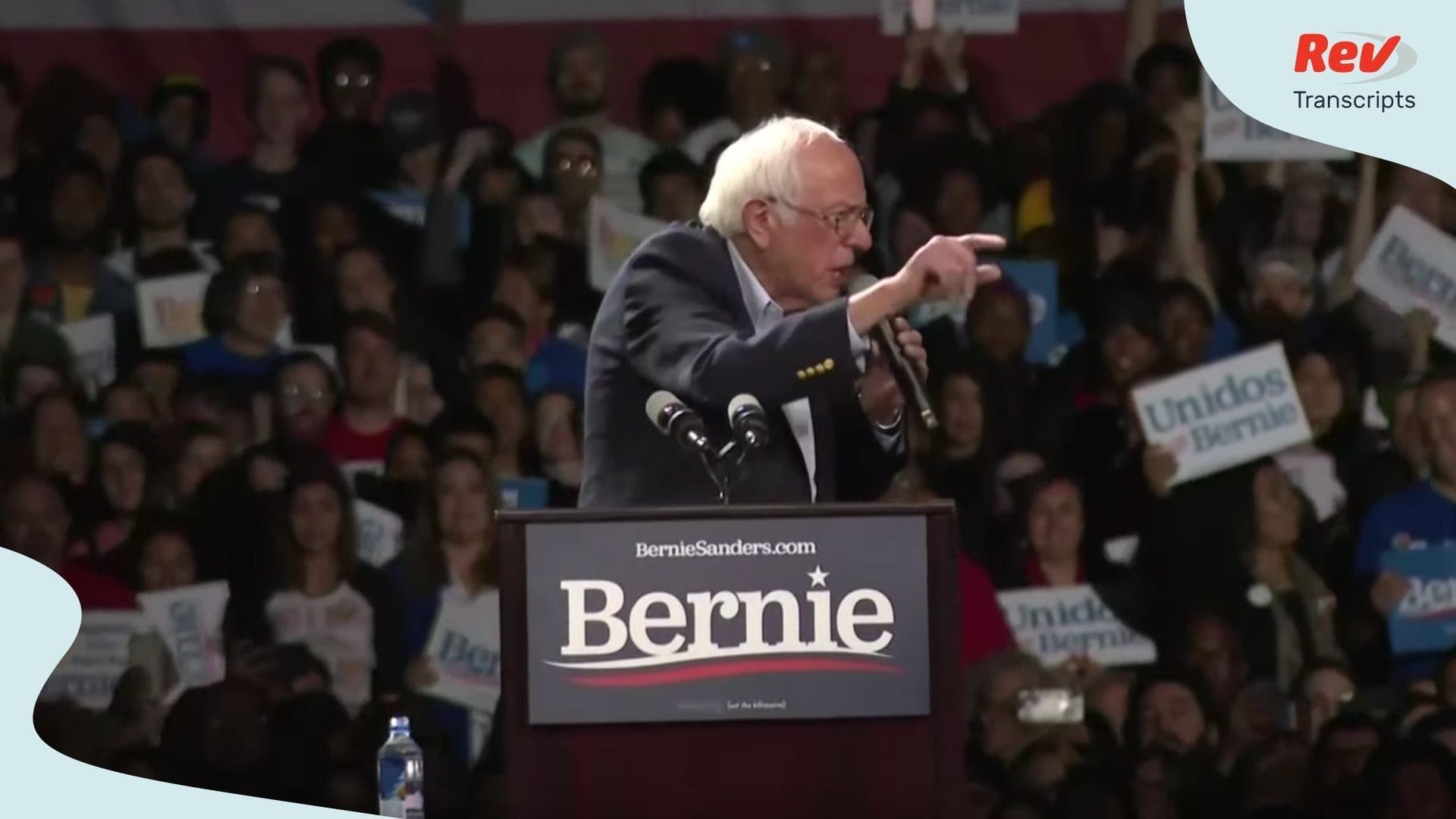 Bernie Sanders held a rally in Los Angeles on Monday March 2, a day before Super Tuesday. Read the transcript of his rally right here on Rev.com.

Bernie Sanders: (00:26)
Thank you. In case you haven’t noticed, we’re a few people here tonight. Thanks all for coming out. And let me begin by introducing to you someone who will be a great first lady, my wife Jane Sanders. Let me thank those who have spoken already, Representative Chuy Garcia, Scarlet Peralta. Let me thank Cafe Fuego for their music, Ana Tijoux for her singing. Let me thank ‎Bonnie Castillo‎, the head of one of the great unions in this country, the National Nurses United. And what can we say about Sarah Silverman? And I want to make a special announcement tonight, that we are going to nominate for Vice President, a youthful, vigorous Dick Van Dyke. No, I thank Dick very much. Not only for being one of the great actors in America, but for having a conscience, which speaks to justice and dignity. Dick, thanks very much.

Bernie Sanders: (02:18)
And let me thank Patrisse Cullors. Patrisse, as you all know, is one of the co-founders of Black Lives Matter. And she has in her work, helped change the course of American history. Patrice, thank you very much for what you’re doing. And let me take Marisa Franco for her beautiful remarks. Marisa is the executive director at Mijente. I know you’re going to want to listen to some music in a few minutes, right? So I have decided to a limit my remarks to three hours. All right. If you insist, we’ll make it four hours. I think we can get the message out fairly shortly and that is, we are going to defeat the most dangerous President in modern American history. With your help on Tuesday, we’re going to win the Democratic primary here in California. With your help, we’re going to win the democratic nomination. And with your help, we are going to defeat the most dangerous President in the modern history of America.

Bernie Sanders: (05:30)
Now all of you know that the message of our campaign is us, not me. Because unlike Trump and his friends, we believe the function of life is not to make billions and to step on anybody in your way, to lie, cheat, or steal. We understand that as human beings we are stronger and better when we care about each other. Every family in America has its share of problems. We are in it together. My family cares for your family, your family cares for my family. We grow together.

Bernie Sanders: (06:40)
But us not me also means that we must develop the strongest grassroots political movement in the history of this country. We are not just a campaign, we are a multi-generational, multi-racial grassroots movement. That is going to create an economy and a government that works for all, not just the one percent. We are going to raise the minimum wage so that every worker in America can earn a decent living. 15 bucks an hour. We’re going to have equal pay for equal work. We’re not going to make it easier for workers to join unions. We’re going to create millions of good paying jobs by rebuilding our crumbling infrastructure.

Bernie Sanders: (08:02)
Now the establishment, as you know, the corporate establishment, the political establishment, you are making them very nervous. They’re really getting quite upset. They’re seeing workers stand up and demand decent wages. They’re seeing young people demanding the right to get a higher education without going into debt. They’re seeing people all across this country understanding that health care is a human right, not a privilege. And the fossil fuel industry, whoa. They are catching on that the American people understand that their short term profits are not more important than the future of our planet.

Bernie Sanders: (09:24)
This campaign is the campaign that is prepared to tell the truth about what goes on in our country, not push it under the rug. And that means we will end a broken and racist criminal justice system. We’re going to invest in our young people in jobs and education, not more jails, not more incarceration. We have more people in jail today than any other country on earth, disproportionately African American, Latino and native Americans. Together, we are going to end that embarrassment. Today in America, 400,000 people are in jail right now, not having been convicted of anything. They’re in jail because they are poor and cannot afford bail. We’re going to end cash bail in America. We’re going to add private prisons and detention centers. corporations should not be profiting by locking up fellow Americans.

Bernie Sanders: (11:27)
And we finally are going to end the destructive war on drugs. Now it turns out, as you all know, there are some things that a President can do by executive order, there are other things you need legislation for. Turns out that you could legalize marijuana in every state in this country by executive order.

Bernie Sanders: (12:18)
And not only will we legalize marijuana in every state, we will move forward to expunge the records of those arrested in possession of marijuana. And when we talk about broken and racist systems, we have got to bring about a complete overhaul of our immigration system. I am the proud son of an immigrant. My father came to this country at the age of 17 without a nickel in his pocket, couldn’t speak a word of English and had very little education. I will not allow the continuation of the demonization of immigrants in this country. On day one, we will sign an executive order restoring the legal status of 1.8 billion young people and their parents, eligible for the DACA program.

Bernie Sanders: (13:50)
We are going to end the ICE raids that are terrorizing communities. We are going to end a border policy that allows federal agents to snatch babies from the arms of their mothers, not going to happen. And we will do what should have been done decades ago, pass bipartisan comprehensive immigration reform and a path toward citizenship. The people in California, in Vermont and all over this country are horrified by the level of gun violence that we see. Our administration will pass the most sweeping gun safety legislation in the history of this country.

Bernie Sanders: (15:03)
Donald Trump and the Republican leadership are intimidated by the NRA. I will not be intimidated by the NRA. We will pass universal background checks. People who have violent pasts, including domestic violence, should not own guns. We will end the gun show loophole. And we will do what the American people want and that is end the sale and distribution of assault weapons in this country. I’m a United States Senator, I hear a lot of speeches on the floor of the Senate from conservative Republicans. And their mantra is that they believe in small government. They believe in getting the government off the backs of the American people.

Bernie Sanders: (16:24)
Well, I say to those hypocrites, if you believe in getting the government off the backs of the American people, understand that it is women who have a right to control their own bodies, not the government.

Bernie Sanders: (17:07)
My promise to you is I will never nominate anybody to the Supreme court or the federal bench who is not 100% pro Roe v. Wade. We will work to codify Roe v. Wade, put it into law. Trump and his friends want to cut Planned Parenthood. Well, we got some bad news for them. We’re going to expand funding for Planned Parenthood. So brothers and sisters, here we are two days away from the primary here in California. Let me tell you something that you already know. The candidate who wins in California has an excellent chance to win the Democratic nomination.

Bernie Sanders: (18:30)
So tonight, I am here to ask for your support to win on Tuesday. Tonight I’m asking you not only to come out and vote, but the bring your friends, your uncles, your aunts, your fellow workers. Let us have the highest voter turnout in California primary history. In this most consequential year, let us go forward, win the nomination. Let us go forward and defeat Donald Trump. Let us go forward and transform this country. Trump and his friends want to divide us up based on the color of our skin, where we were born, our sexual orientation or our religion. Well Chuck, Trump has another guess coming, because he ain’t going to succeed in doing that.