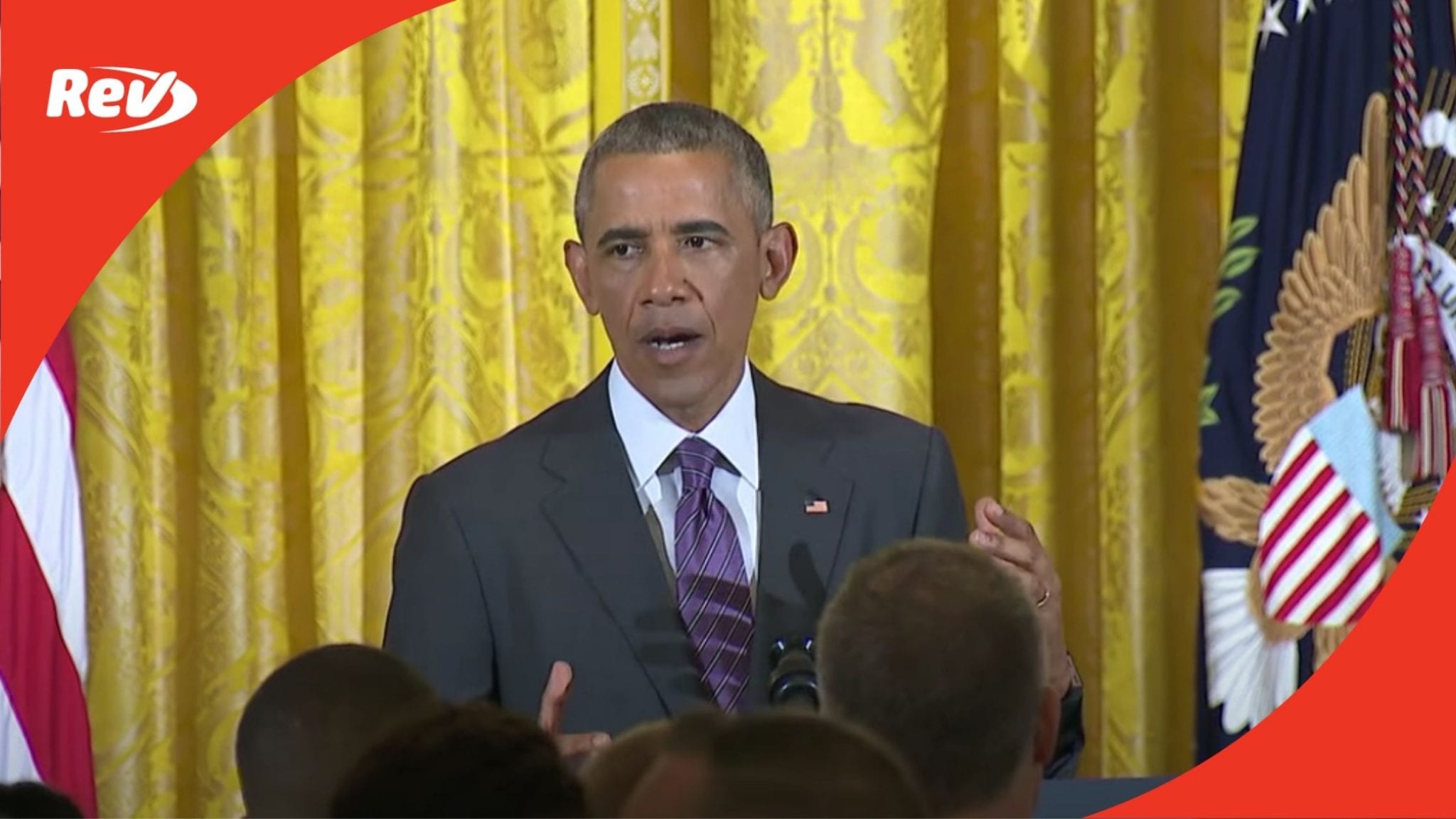 President Barack Obama gave a speech on LGBTQ rights for Pride Month on June 9, 2016. Read the transcript of his speech here.

Barack Obama: (00:00)
Hello, everybody! Hello, hello, hello! Good to see you. Hello. Welcome to the White House. Let me … First of all, let me acknowledge some outstanding public servants who are here. We’ve got Secretary of the Army, Eric Fanning, is in the house. Export-Import Bank Chairman, Fred Hochberg, is here. We’ve got some amazing members of Congress. No one who has done more on behalf of justice and equality that former-Speaker, and perhaps soon-to-be Speaker again, Nancy Pelosi. We love Nancy.

Barack Obama: (00:55)
So, this is the 8th Pride Reception that we will celebrate together. I want to begin by saying thank you to all the people that … I’m looking out in the audience. I see some new friends, but a lot of old friends, folks who have been with us through thick and thin. And I am grateful for all that you’ve done to work with us to accomplish some amazing transformations over these last seven and a half years.

Barack Obama: (01:27)
So, every year, we set aside this month to celebrate the ways that so many lesbian, gay, bisexual, and transgender Americans have helped to make our union just a little more perfect. We honor the countless, nameless heroes that paved the way for progress, the activists who marched, the advocates who organized, the lawyers who argued cases, the families who stood by their loved ones even when it was tough, every brave American who came out and spoke out, especially when it was tough.

Barack Obama: (02:01)
Because of them, because of all of you, there’s a lot to be proud of today. Today, we live in an America where Don’t Ask, Don’t Tell don’t exist no more, because no one should have to hide who they love in order to serve the country that they love. We live in an America that protects all of us with a hate crimes law that bears the name of Matthew Shepherd.

Barack Obama: (02:32)
We live in an America where all of us are treated more equally because visiting hours in hospitals no longer depend on who you are, and insurance companies can no longer turn somebody away simply because of who you love. Thanks to heroes like Edith Windsor and Jim … I always get Jim’s name [inaudible 00:02:51]. Jim knows I love him, but I never know where to put the emphasis. Obergefell.

Barack Obama: (03:01)
Generations of couples who insisted that love is love, we now live in an America where all of our marriages and our families are recognized as equal under the law.

Barack Obama: (03:13)
And that’s an extraordinary thing. When you talk to the upcoming generation, our kids, Malia, Sasha’s generation, they instinctively know people are people and families are families. And discrimination, it’s so last-century. It’s so passe. It doesn’t make sense to them. So, we live in an America where the laws are finally catching up to the hearts of kids, and what they instinctively understand.

Barack Obama: (03:47)
Some folks never imagined we’d come this far. Maybe even some in this room. Change can be slow, and I know that there have been times where at least some of the people in this room have yelled at me. But together, we’ve proven that change is possible, that progress is possible. It’s not inevitable, though. History doesn’t just travel forward. It can go backwards if we don’t work hard, so we can’t be complacent. We cannot be complacent. Securing the gains this country has made requires perseverance and vigilance, and it requires voting because we’ve got more work to do.

Barack Obama: (04:31)
We still have more work to do when gay and bisexual men make up 2/3rds of new HIV cases in our country. We have to work hard to make sure that jobs are not being denied, people aren’t being fired, because of their sexual orientation. We still have work to do when transgender persons are attacked, even killed, for just being who they are. We got work to do when LGBT people around the world still face incredible isolation, and poverty, and persecution, and violence, and even death. We have to work to make sure that every single child, no matter who they are or where they come from or what they look like or how they live, feels welcomed and valued and loved. So, we’re going to have to keep on pushing, and that’s the work of all of us.

Barack Obama: (05:23)
The great and often unsung civil rights hero, Bayard Rustin, once said: “We need, in every community, a group of angelic trouble-makers.” I like that. Now, that’s what I see here tonight, people who aren’t afraid to ruffle feathers in the name of justice and equality until we extend the full promise of America to every single one of us. And that’s always been our story, not just in Selma or Seneca Falls, but in Compton’s Café and the Stonewall Inn is the story of brave Americans who are willing to risk everything. Not just their own liberty or dignity, but also doing it on behalf of the dignity and liberty of generations to come. They understood a truth that lies at the heart of this nation.

Barack Obama: (06:14)
When all Americans are treated equal, we’re all more free, and that’s what should give us hope. Despite our differences and our divisions, and the many complicated issues that we grapple with, real change is possible. Minds open. Hearts change. America shifts. And if the past few years have taught us anything, it’s that people who love their country can change it.

Barack Obama: (06:40)
One of the most special moments of my presidency was that warm summer night last June when we lit up the White House like a rainbow.

Barack Obama: (06:57)
Now, it was a powerful symbol here at home where more Americans finally felt accepted and whole in that their country recognized the love that they felt. It was a beacon for people around the world who are still fighting for those rights. It was a reminder that when the change we see comes, and when we move a little bit further on our journey toward equality and justice, we still have a responsibility to reach back and help pull up others who are striving to do the same, so enjoy tonight. Have some champagne. Some of you already have, I can tell. Tomorrow, we get back to work.

Barack Obama: (07:46)
And by the way, we get back to work not just fighting on behalf of justice and equality for the LGBT community, but for everybody because one of the … If you felt the sting of discrimination, then you don’t just fight to end discrimination for yourself. You got to fight for the poor kid who needs opportunity. You need to fight for the working mom who can’t pay the bills. You got to fight for some young woman on the other side of the world who can’t get an education. It can’t just be about us. It’s about, “We,” and what we can do together.

Barack Obama: (08:38)
So, I’m very proud to have fought alongside you. We got more miles in the journey, and I’m so glad that we’re going to be traveling that world together. Thank you very much, everybody. Thank you.