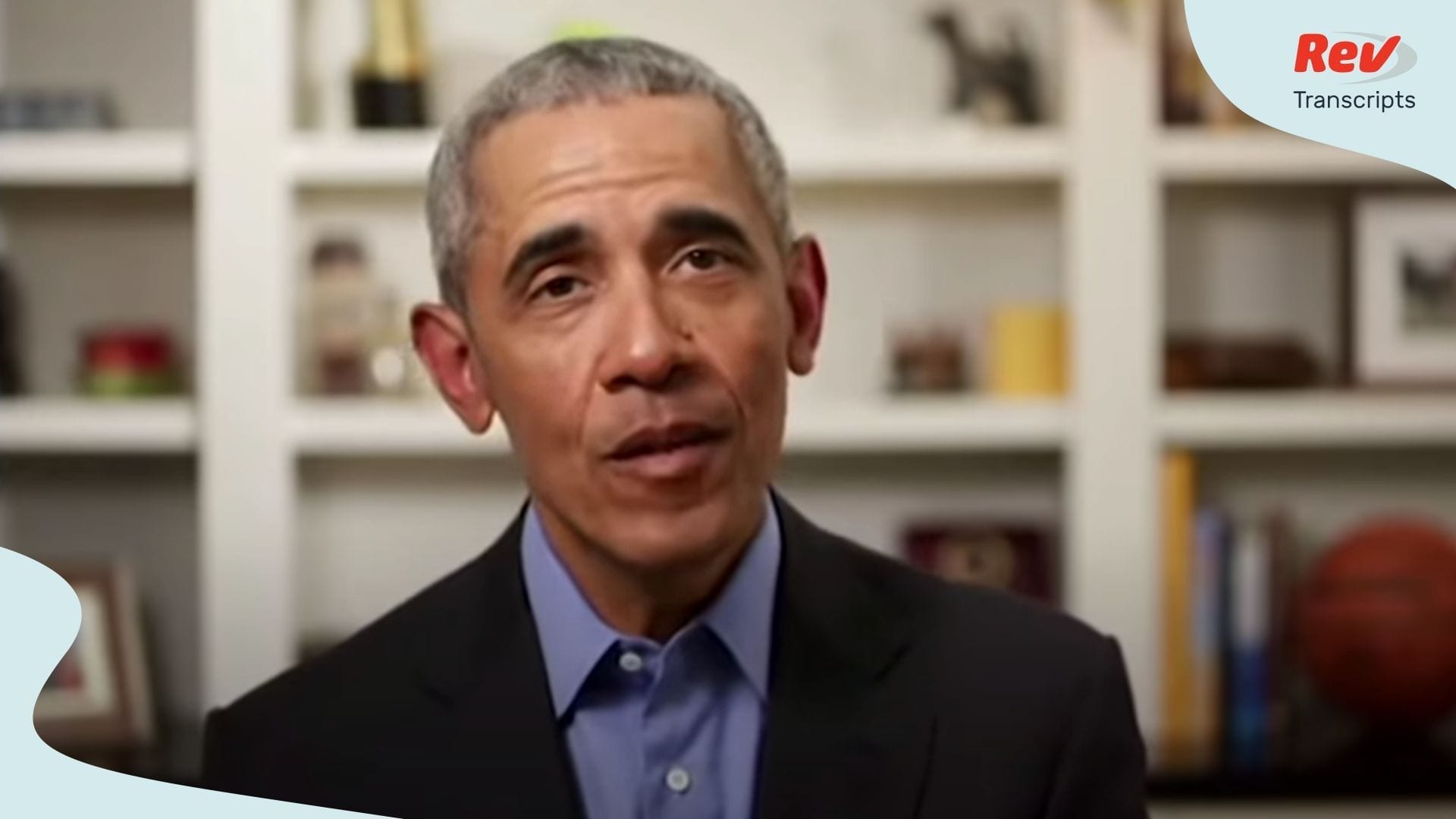 In an online video speech on April 14, Barack Obama officially endorsed his former Vice President Joe Biden for the 2020 presidency. Read the full transcript of his endorsement announcement here.

Barack Obama: (00:00)
Hi everybody. Let me start by saying the obvious, these aren’t normal times. As we all manage our way through a pandemic unlike anything we’ve seen in a century, Michelle and I hope that you and your families are safe and well. If you’ve lost somebody to this virus or if someone in your life is sick or if you’re one of the millions suffering economic hardship, please know that you’re in our prayers. Please know that you’re not alone. Because now’s the time for all of us to help where we can and to be there for each other, as neighbors, as coworkers, and as fellow citizens. In fact over the past weeks, we’ve seen plenty of examples of the kind of courage, kindness, and selflessness that we’re going to need to get through one of the most difficult times in our history. Michelle and I have been amazed at the incredible bravery of our medical professionals who are putting their lives on the line to save others.

Barack Obama: (01:00)
The public servants and health officials battling this disease. The workers taking risks every day to keep our economy running. And everyone who’s making their own sacrifice at home with their families all for the greater good. But if there’s one thing we’ve learned as a country from moments of great crisis, it’s that the spirit of looking out for one another can’t be restricted to our homes or our workplaces, or our neighborhoods, or our houses of worship. It also has to be reflected in our national government. The kind of leadership that’s guided by knowledge and experience; honesty and humility, empathy and grace. That kind of leadership doesn’t just belong in our state capitols and mayors offices. It belongs in the White House. And that’s why I’m so proud to endorse Joe Biden for President of the United States. Choosing Joe to be my Vice President was one of the best decisions I ever made and he became a close friend. And I believe Joe has all the qualities we need in a president right now.

Barack Obama: (02:08)
He’s someone whose own life has taught him how to persevere, how to bounce back when you’ve been knocked down. When Joe talks with parents who’ve lost their jobs, we hear the son of a man who once knew the pain of having to tell his children that he’d lost his. When Joe talks about opportunity for our kids, we hear the young father who took the train home each night so he could tuck his children into bed and we hear the influence of Jill, a lifelong teacher. When Joe talks to families who’ve lost a hero, we hear another parent of an American veteran, a kindred spirit, somebody whose faith has endured the hardest loss there is. That’s Joe. Through all his trials, he’s never once forgotten the values or the moral fiber that his parents passed onto him and that made him who he is. That’s what steels his faith, in God, in America and in all of us.

Barack Obama: (03:09)
That steel made him an incredible partner when I needed one the most. Joe was there as we rebuilt from the Great Recession and rescued the American auto industry. He was the one asking what every policy would do for the middle class and everyone striving to get into the middle-class. That’s why I asked him to implement the Recovery Act, which saved millions of jobs and got people back on their feet because Joe gets stuff done. Joe helped me manage H1N1 and prevent the Ebola epidemic from becoming the type of pandemic we’re seeing now. He helped me restore America’s standing and leadership in the world on the other threats of our time, like nuclear proliferation and climate change. Joe has the character and the experience to guide us through one of our darkest times and heal us through a long recovery. And I know he’ll surround himself with good people. Experts, scientists, military officials, who actually know how to run the government and care about doing a good job running the government and know how to work with our allies and who will always put the American people’s interests above their own.

Barack Obama: (04:21)
Now, Joe will be a better candidate for having run the gauntlet of primaries and caucuses alongside one of the most impressive Democratic fields ever. Each of our candidates were talented and decent with the track record of accomplishment, smart ideas, and serious visions for the future. And that’s certainly true of the candidate who made it farther than any other, Bernie Sanders. Bernie’s an American original, a man who has devoted his life to giving voice to working people’s hopes, dreams and frustrations. He and I haven’t always agreed on everything, but we’ve always shared a conviction that we have to make America a fair, more just, more equitable society. We both know that nothing is more powerful than millions of voices calling for change and the ideas he’s championed, the energy and enthusiasm he inspired, especially in young people, will be critical in moving America in a direction of progress and hope. Because for the second time in 12 years, we’ll have the incredible task of rebuilding our economy and to meet the moment, the Democratic Party will have to be bold.

Barack Obama: (05:37)
I could not be prouder of the incredible progress that we made together during my presidency, but if I were running today, I wouldn’t run the same race or have the same platform as I did in 2008. The world is different. There’s too much unfinished business for us to just look backwards. We have to look to the future. Bernie understands that and Joe understands that. It’s one of the reasons that Joe already has what is the most progressive platform of any major party nominee in history. Because even before the pandemic turned the world upside down, it was already clear that we needed real structural change. The vast inequalities created by the new economy are easier to see now, but they existed long before this pandemic hit. Health professionals, teachers, delivery drivers, grocery clerks, cleaners, the people who truly make our economy run, they’ve always been essential.

Barack Obama: (06:42)
And for years, too many of the people who do the essential work of this country have been underpaid, financially stressed and given too little support. And that applies to the next generation of Americans, young people graduating into unprecedented unemployment. They’re going to need economic policies that give them faith in the future and give them relief from crushing student loan debt. So we need to do more than just tinker around the edges with tax credits or underfunded programs. We have to go further to give everybody a great education, a lasting career and a stable retirement. We have to protect the gains we made with the Affordable Care Act, but, it’s also time to go further. We should make plans affordable for everyone, provide everyone with a public option, expand Medicare and finish the job so that healthcare isn’t just a right but a reality for everybody.

Barack Obama: (07:44)
We have to return the US to the Paris Agreement and lead the world in reducing the pollution that causes climate change. That science tells us, we have to go much further, that it’s time for us to accelerate progress on bold new green initiatives that make our economy a clean energy innovator, save us money and secure our children’s future.

Barack Obama: (08:08)
Of course, Democrats may not always agree on every detail of the best way to bring about each and every one of these changes. But we do agree that they’re needed and that only happens if we win this election because one thing everybody has learned by now is that the Republicans occupying the White House and running the US Senate are not interested in progress. They’re interested in power. They’ve shown themselves willing to kick millions off the health insurance and eliminate preexisting condition protections for millions more. Even in the middle of this public health crisis, even as they’re willing to spend $1 trillion on tax cuts for the wealthy, they’ve given polluters unlimited power to poison our air and our water and denied the science of climate change just as they denied the science of pandemics.

Barack Obama: (09:10)
Repeatedly, they’ve disregarded American principles of rule of law and voting rights and transparency, basic norms that previous administrations observed regardless of party. Principles that are the bedrock of our democracy. So our country’s future hangs on this election, and it won’t be easy. The other side has a massive war chest. The other side has a propaganda network with little regard for the truth. On the other hand, pandemics have a way of cutting through a lot of noise and spin to remind us of what is real and what is important. This crisis has reminded us that government matters. It’s reminded us that good government matters, that facts and science matter, that the rule of law matters. That having leaders who are informed and honest and seek to bring people together rather than drive them apart. Those kinds of leaders matter.

Barack Obama: (10:27)
In other words, elections matter. Right now we need Americans of goodwill to unite in a great awakening against a politics that too often has been characterized by corruption, carelessness, self dealing, disinformation, ignorance and just plain meanness. And to change that, we need Americans of all political stripes, to get involved in our politics and our public life like never before. For those of us who believe in building a more just, more generous, more democratic America where everybody has a fair shot at opportunity. For those of us who believe in a government that cares about the many and not just the few. For those of us who love this country and are willing to do our part to make sure it lives up to its highest ideals. Now’s the time to fight for what we believe in. So join us, join Joe, go to joebiden.com right now. Make a plan for how you are going to get involved. Keep taking care of yourself and your families and each other. Keep believing in the possibilities of a better world and I will see you on the campaign trail as soon as I can. Thanks.