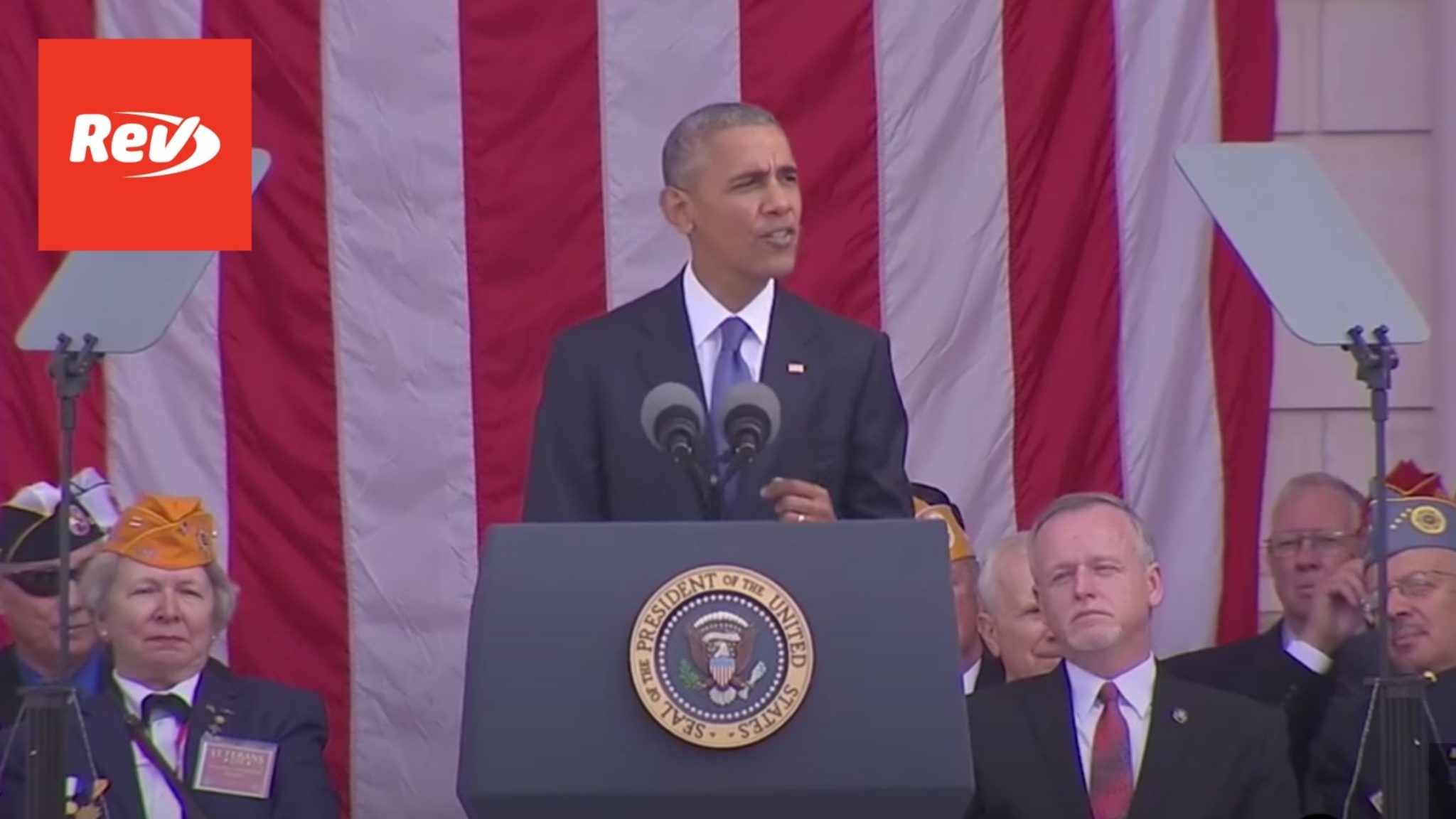 President Barack Obama: (01:11)
And today on Veterans Day, we honor those who honored our country with its highest form of service. You who once wore the uniform of our Army, Navy, Air Force, Marines or Coast Guard. We owe you our thanks. We owe you our respect and we owe you our freedom. We come together to express our profound gratitude for the sacrifices and contributions you and your family made on the battlefield, at home and at outposts around the world. But America’s gratitude to our veterans is something always grounded in something greater than what you did on duty.

President Barack Obama: (02:10)
It’s also an appreciation of the example that you continue to set after your service has ended. Your example as citizens. Veterans Day often follows a hard fought political campaign, an exercise in the free speech and self government that you fought for. It often lays bare disagreements across our nation, but the American instinct has never been to find isolation in opposite corners. It is to find strength in our common creed, to forge unity from our great diversity, to sustain that strength and unity even when it is hard.

President Barack Obama: (02:58)
And when the election is over, as we search for ways to come together, to reconnect with one another and with the principles that are more enduring than transitory politics, some of our best examples are the men and women we salute on Veterans Day. It’s the example of young Americans, our 9/11 generation who as first responders ran into smoldering towers, then ran to a recruiting center and signed up to serve. It’s the example of a military that meets every mission, one united team all looking out for one another, all getting each other’s backs.

President Barack Obama: (03:47)
It’s the example of the single most diverse institution in our country, soldiers, sailors, airmen, marines, and coast guardsmen who represent every corner of our country, every shade of humanity, immigrant and native born, Christian, Muslim, Jew, and non-believer alike all forged into common service. It’s the example of our veterans, patriots who when they take off their fatigues put back on the camouflage of everyday life in America and become our business partners and bosses, our teachers and our coaches, our first responders, city council members, community leaders, role models, all still serving this country we love with the same sense of duty and with valor.

President Barack Obama: (04:52)
A few years ago, a middle school student from Missouri entered an essay contest about why veterans are special. And this is what he wrote. “When I think of a veteran, I think of men or women who will be the first to help an elderly lady across the street. I also think of someone who will defend everyone regardless of their race, age, gender, hair color, or other discriminations.” After eight years in office, I particularly appreciate that he included hair color, but that middle schooler is right. Our veterans are still the first to help, still the first to serve.

President Barack Obama: (05:42)
They are women like the retired military police woman from Buffalo who founded an AMVETS post in her community and is now building a safe place for homeless female veterans with children. They are men like the two veterans from Tennessee, one in his 50s, one in his 60s who wrote me to say they would happily suit up and ship out if we needed them. “We might be just a little old,” they wrote, “but we will be proud to go and do what we were taught to do.” Whenever the world makes you cynical, whenever you seek true humility and selflessness, look to a veteran.

President Barack Obama: (06:30)
Look to someone like First Lieutenant Irving Learner. Irving was born in Chicago to Russian Jewish immigrants during World War I. He served as a bombardier in the Army Air Corps, flying dozens of missions toward the end of World War II. When he returned home, Irving did what a lot of veterans do. He put his medals away. He kept humble about his service, started living a quiet life. One fall day, walking down Sheffield Avenue on Chicago’s North Side, a stranger stopped him. He said, “Thank you for your service” and he handed him a ticket to see the Cubs play in the World Series.

President Barack Obama: (07:19)
Now it’s a good thing Irving took that ticket because it would be a while until his next chance. Irving worked hard managing the warehouses for his brother-in-law’s tire company. He got married to a sergeant in the Women’s Air Corps, no less. He raised four children. The oldest of whom Susan is celebrating her 71st birthday today. And on a June morning, many years ago, another one of Irving’s daughters, Carol, called to check in. Her mother answered, but was in a rush. “We can’t talk,” she said. “Your father’s being honored and were late.” Carol asked, “Honored for what?”

President Barack Obama: (08:07)
And the answer came “For his heroism in the skies above Normandy exactly 50 years earlier.” You see Irving’s children never knew that their father flew over those French beach heads on D-Day. He never mentioned it. Now when they call to check in, his children always say, “Thank you for saving the world.” And Irving sharp as ever at 100 years young, always replies “Well, I had a little help.” Whenever the world makes you cynical, whenever you doubt that courage and goodness and selflessness is possible, then stop and look to a veteran.

President Barack Obama: (08:53)
They don’t always go around telling stories of their heroism, so it’s up to us to ask and to listen, to tell those stories for them and to live in our own lives the values for which they were prepared to give theirs. It’s up to us to make sure they always get the care that they need. As Bob mentioned, when I announced my candidacy for this office almost a decade ago, I recommitted this generation to that work and we’ve increased funding for veterans by more than 85%. We’ve cut veterans homelessness almost in half. Today, more veterans have access to healthcare and fewer are unemployed.

President Barack Obama: (09:37)
We help disabled veterans afford prosthetics. We’re delivering more mental healthcare services to more veterans than ever before because we know that not all wounds of war are visible. Together, began this work. Together, we must continue to keep that sacred trust with our veterans and honor their good work with our own, knowing that our mission is never done. It is still a tragedy that 20 veterans a day take their own lives. We have to get them to help they need. We have to keep solving problems like long wait times at the VA. We have to keep cutting the disability claims backlog.

President Barack Obama: (10:24)
We have to resist any effort to outsource and privatize the healthcare we owe America’s veterans. On Veterans Day, we acknowledge humbly that we can never serve our veterans in quite the same way that they served us, but we can try. We can practice kindness. We can pay it forward. We can volunteer. We can serve. We can respect one another. We can all always get each other’s backs. That is what Veterans Day asks all of us to think about. The person you pass as you walk down the street might not be wearing our nation’s uniform today, but consider for a moment that a year or a decade or a generation ago, he or she might have been one of our fellow citizens who was willing to lay down their life for strangers like us.

President Barack Obama: (11:23)
And we can show how much we love our country by loving our neighbors as ourselves. May God bless all who served and still do and may God bless the United States of America.