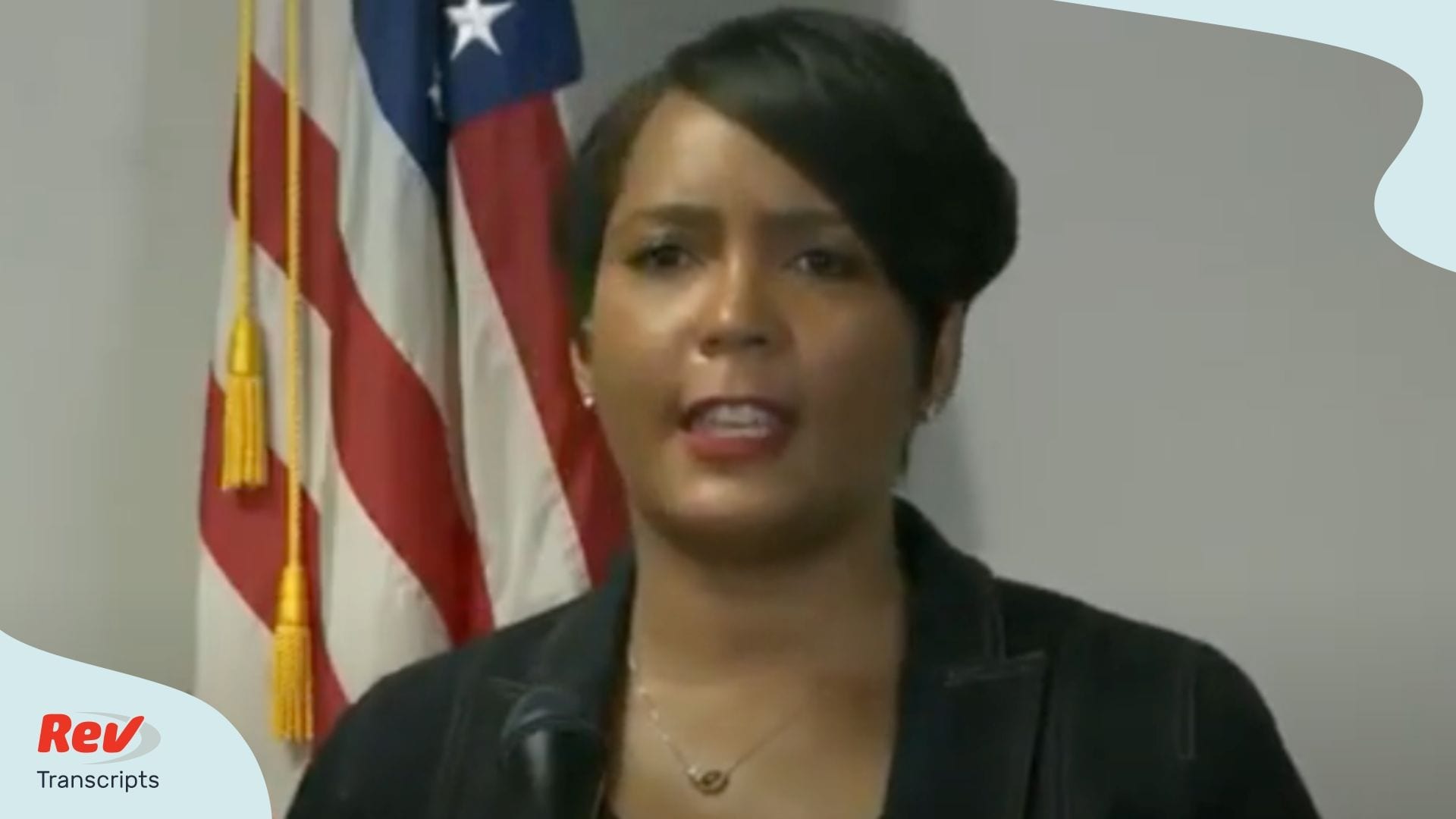 Atlanta Mayor Keisha Lance Bottoms’ press conference on the death of Secoriea Turner, an 8-year-old girl who was shot and killed on the 4th of July in Atlanta. “You shot and killed a baby,” she said in an emotional speech.

Mayor Keisha Lance Bottoms: (00:00)
Last night, some people put the barriers back up. I received a notice about 45 minutes to an hour that the barriers were back up before I received the message that little Secoriea had been shot and killed. We’ve talked a lot about what we are demanding from our officers in our communities. We’ve protested, we’ve demonstrated, we’ve been angry, we’ve cried. We’ve demanded action.

Mayor Keisha Lance Bottoms: (00:50)
Well, now we’re demanding action for Secoriea Turner and for all of the other people who were shot in Atlanta last night and over the past few weeks, because the reality is this, these aren’t police officers shooting people on the streets of Atlanta. These are members of the community shooting each other. And in this case, it is the worst possible outcome.

Mayor Keisha Lance Bottoms: (01:16)
And there were two other people who were actually shot and killed last night, and several others. Enough is enough. Enough is enough. We have talked about this movement that’s happening across America and this moment in time where we have the ears and the interest of people across this country and across this globe who are saying they want to see change.

Mayor Keisha Lance Bottoms: (01:50)
But the difference in this moment in time with the Civil Rights movement, the Civil Rights movement, there was a defined, common enemy. So we’re fighting the enemy within when we are shooting each other up on our streets in this city and you shot and killed a baby. And it wasn’t one shooter. They were at least two shooters. An eight-year-old baby. If you want people to take us seriously and you don’t want us to lose this movement then we can’t lose each other in this.

Mayor Keisha Lance Bottoms: (02:31)
And there are a peaceful demonstrators across this city and across this country, and I applaud them, and I thank them for being peaceful and for honoring the lives of so many people who have been killed in America because of injustice. That’s an important movement that’s happening. But this random, wild, wild West shoot them up because you can, it’s got to stop.

Mayor Keisha Lance Bottoms: (03:05)
It has to stop. You can’t blame this on a police officer. You can’t say that this is about criminal justice reform. This is about some people carrying some weapons who shot up a car with an eight-year-old baby in the car. For what? And I wish that I could stand here as mayor and tell you what the answers are and what the solutions are, but it’s simple. Just, we got to stop this. We are doing each other more harm than any police officer on this force.

Mayor Keisha Lance Bottoms: (03:55)
We’ve had over 75 shootings in this city over the past several weeks. You can’t blame that on APD. So I am just asking you to please honor this baby’s life. Please, if you know who did this, please turn them in. These people are a danger to all of us. And people talked about people walking carrying weapons at University and Pryor, it’s very serious, but the reality is this: Georgia is an open-carry state.

Mayor Keisha Lance Bottoms: (04:45)
So the sad part is that they can walk around with weapons this long down our streets, because the law in Georgia says that they can do it. So you got people walking down the street with weapons this long because Georgia law says it’s okay. If you know who was out there, and not just Secoriea, everybody else who got shot last night, and who’s been shot over the past several weeks, you cannot be silent.

Mayor Keisha Lance Bottoms: (05:36)
Your silence will not protect you. And what I want to see from us, I want to see the same anger and outrage. I want us to see it on behalf of Sequoia and all the other people and children who are getting shot in our streets. It’s a lot of change that has to happen across this country. And police reform is a big part of it, but we also got to reform our own communities.

Mayor Keisha Lance Bottoms: (06:22)
An eight-year-old girl was killed last night because her mother was riding down the street. You don’t want somebody on the streets who would shoot into a car randomly. If you know them, you need to turn them in. If you think you know anything, you need to speak it and you need to say it because if Secoriea was not safe last night, none of us are safe. With that I’m going to turn it over to Chief Bryant for …