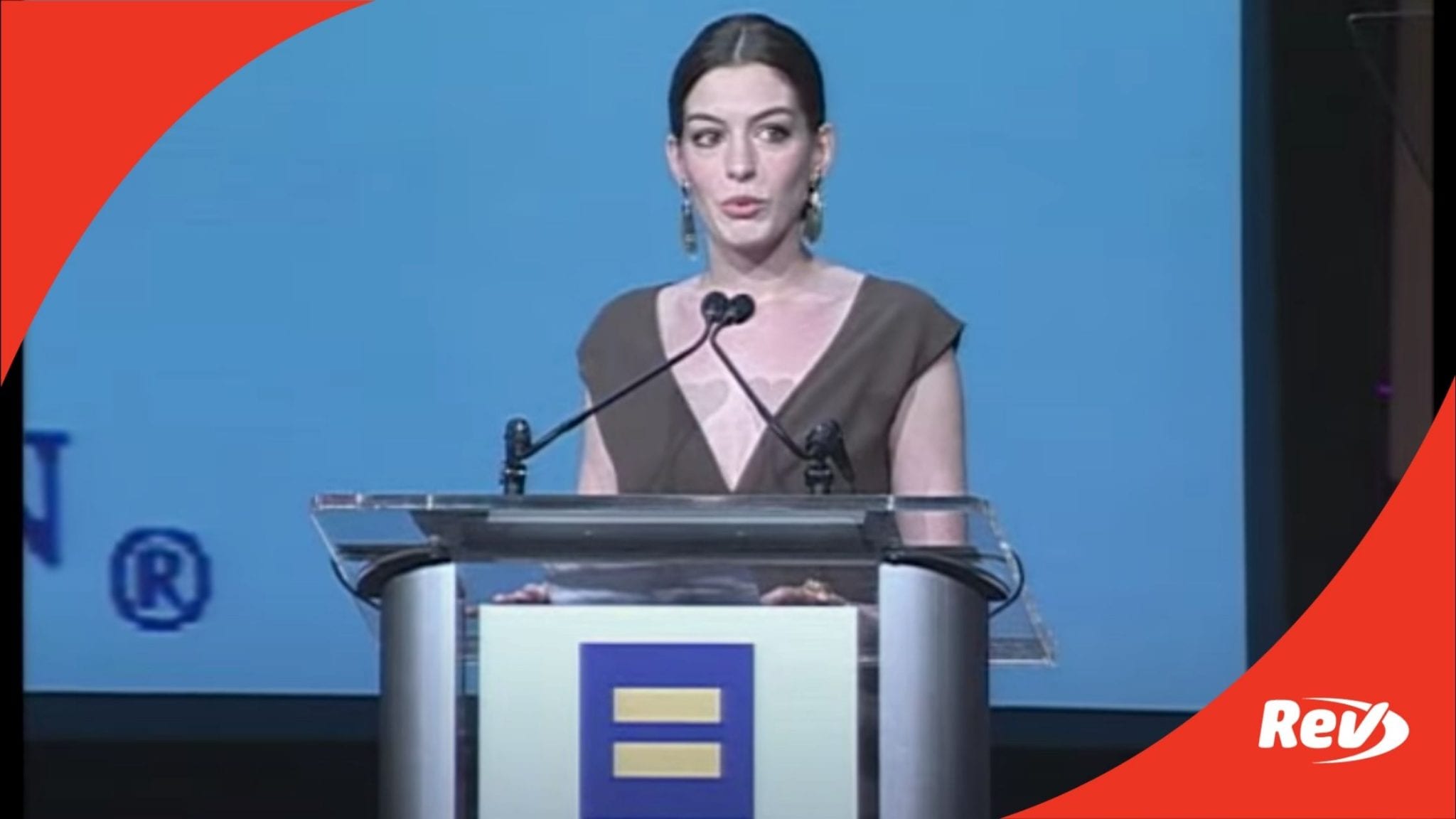 Anne Hathaway gave a speech about LGBTQ rights at the Human Rights Campaign Los Angeles Dinner on March 20, 2008. Read the transcript of the speech here.

Anne Hathaway: (00:00)
My dear friends, you have honored me this evening to a degree I feel I don’t yet deserve. When I read about the work of my fellow honorees, I felt humbled. And certain that among us, I am the one with much to prove. I believe I’ve received this award not so much because of what I’ve done, but because of the way I was born and raised. I was born the younger sister of a gay man, my older brother, Mike, and the daughter of parents who are both empathetic to and loving of the LGBT community. In my household, being gay was and is no big deal. When my brother came out, we hugged him, said we loved him, and that was that.

Anne Hathaway: (00:57)
When he brought home his first boyfriend, now husband, home for a couple of weeks one Christmas, my father’s only comment to my mother was, “Please try not to mix up our underwear.” We had no idea that I would become recognizable because of my work and that we would become publicly labeled as having an alternative family lifestyle. Just for the record, we don’t feel that there is actually anything alternative about our family values.

Anne Hathaway: (01:36)
So for semantic reasons only, it’s with some hesitation that I accept the HRC Ally Award. I don’t consider myself just an ally to the LGBT community, I consider myself your family. And so I’m doing what we should all do with our families. I’m loving you. I support you. I completely accept you as you are, as I hope you do me. And if anyone ever tries to hurt you, I’m going to give them hell. There are many people who … Did I just say many? That’s such a jerk thing to say.

Anne Hathaway: (02:27)
There are people who have said that I’m being brave for being openly supportive of gay marriage, gay adoption, basically of gay rights, but with all due respect, I humbly dissent. I’m not being brave, I’m being a decent human being. And I don’t think I should receive an award for that, or for merely stating what I believe to be true, that love is a human experience, not a political statement. However, I acknowledged that sadly we live in a world where not everybody feels the same. My family and I will help the good fight continue until that long waited a moment arrives. When our rights are equal and when the political limits on love have been smashed.

Anne Hathaway: (03:16)
This award does not in any way represent the pinnacle of my relationship with the LGBT community, rather, it is a triumphant roar to announce that we are just beginning our fight together. In closing, to paraphrase Ennis Del Mar who was unforgettably embodied by the late, the great Heath Ledger, I swear HRC, I swear. I have not yet done enough to deserve this award, but don’t worry, the best is yet to come. Thank you so much. Really thank you. From the bottom of my heart, I love you all. Thank you so much. Kiss each other.