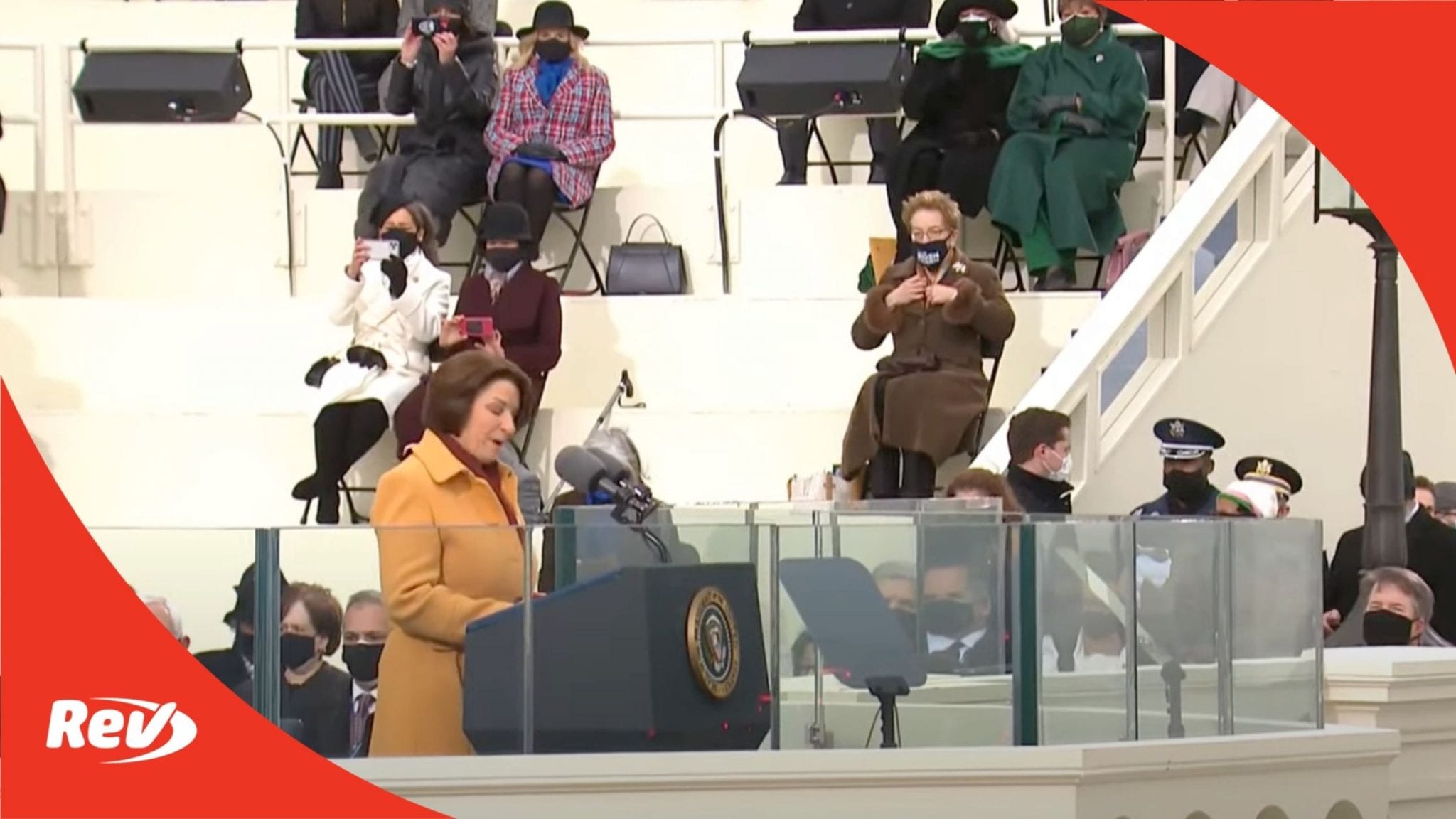 Senator Amy Klobuchar: (00:37)
This ceremony is the culmination of 244 years of a democracy. It is the moment when leaders brought to the stage by the will of the people promise to be faithful to our constitution, to cherish it, and defend it. It is the moment when they become, as we all should be, guardians of our country. Have we become too jaded, too accustomed to the ritual of the passing of the torch of democracy to truly appreciate what a blessing and a privilege it is to witness this moment? I think not.

Senator Amy Klobuchar: (01:17)
Two weeks ago, when an angry, violent mob stage and insurrection and desecrated this temple of our democracy, it awakened us to our responsibilities as Americans. This is the day when our democracy picks itself up, brushes off the dust, and does what America always does. Goes forward as a nation under God, indivisible, with liberty and justice for all.

Senator Amy Klobuchar: (01:52)
This conveyance of a sacred trust between our leaders and our people takes place in front of this shining Capitol dome for a reason. When Abraham Lincoln gave his first inaugural address in front of this capital, the dome was only partially constructed, braced by ropes of steel. He promised he would finish it. He was criticized for spending funds on it during the Civil War. To those critics he replied, “If the people see the capital going on, it is a sign we intend the union shall go on.” And it did. And it will.

Senator Amy Klobuchar: (02:33)
Generations of Americans gave their lives to preserve our Republic in this place, great legislation to protect civil rights and economic security, and lead the world was debated and crafted under this dome. Now it falls on all of us, not just the two leaders we are inaugurating today, to take up the torch of our democracy, not as a weapon of political arson, but as an instrument for good.

Senator Amy Klobuchar: (03:03)
We pledge today never to take our democracy for granted. As we celebrate its remarkable strength, we celebrate its resilience, its grit. We celebrate the ordinary people doing extraordinary things for our nation, the doctors and nurses on the frontline of this pandemic, the officers in the Capitol, a new generation never giving up hope for justice. We celebrate a new president, Joe Biden, who vows to restore the soul of America and cross the river of our divides to a higher plane.

Senator Amy Klobuchar: (03:39)
And we celebrate our first African-American, first Asian American, and first woman vice president, Kamala Harris, who stands on the shoulders of so many on this platform who have forged the way to this day. When she takes the oath of office, little girls and boys across the world will know that anything and everything is possible. And in the end, that is America, our democracy, a country of so much good. And today on these Capitol steps and before this glorious field of flags, we rededicate ourselves to its cause. Thank you.