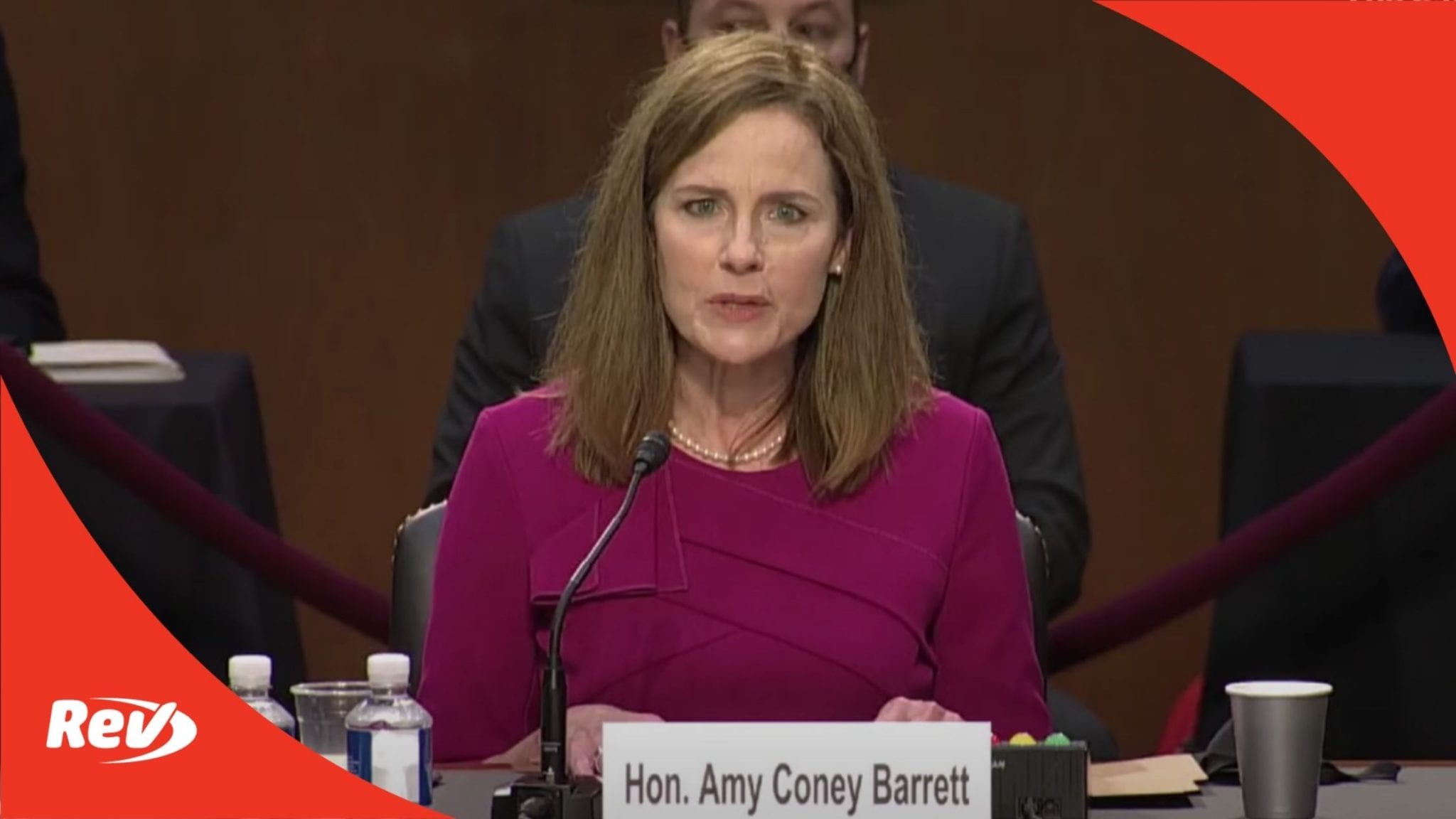 Amy Coney Barrett’s opening statement at her Supreme Court confirmation hearing on October 12. Read the transcript of her remarks here.

Lindsey Graham: (00:00)
Do you solemnly swear that the testimony you’re about to give this committee is the truth, the whole truth and nothing but the truth, so help you God? Welcome to the committee, to your family, you all have done a great job over there. The floor is yours, Judge.

Amy Coney Barrett: (00:28)
Ranking Member Feinstein and members of the committee, I’m honored and humbled to appear before you today as a nominee for Associate Justice of the Supreme Court. I thank the president for entrusting me with this profound responsibility as well as for the graciousness that he and the First Lady have shown my family throughout this process. I thank Senator Young for introducing me as he did at my hearing to serve on the Seventh Circuit. And I also thank Senator Braun for his support and while she could not be with us via the satellite, I am also grateful to former Dean Patty O’Hara of the Notre Dame Law School. She hired me as a professor nearly 20 years ago, and she has been a mentor, colleague, and friend ever since. I thank the members of this committee and your other colleagues in the Senate, who’ve taken the time to meet with me since my nomination. It’s been a privilege to meet you.

Amy Coney Barrett: (01:32)
As I said, when I was nominated to serve as a justice, I’m used to being in a group of nine, my family, nothing is more important to me and I am very proud to have them behind me. My husband, Jesse and I have been married for 21 years. He has been a selfless and wonderful partner every step of the way. I once asked my sister, why do you think marriage is hard, people are always saying that I think it’s easy. And she looked at me and said, “Well, maybe you should ask Jesse if he agrees with that.” I decided not to take her advice because I know that I am far luckier in love than I deserve.

Amy Coney Barrett: (02:14)
Jesse and I are parents to seven wonderful children. Our oldest daughter, Emma, is a sophomore in college who just might follow her parents into a career in the law. Next is Vivian who came to us from Haiti. When Vivian arrived, she was so weak that we were told she might never talk or walk normally, but now she deadlifts as much as the male athletes in our gym. And I assure you, she has no trouble talking. Tess is 16, and while she shares her, parents’ love for the liberal arts, she also has a math gene that seems to have skipped her parents’ generation. John Peter joined us shortly after the devastating earthquake in Haiti and Jesse, who brought him home still describes the shock on JP’s face when he got off the plane in wintertime Chicago. once that shock wore off, JP assumed the happy-go-lucky attitude that is still his signature trait.

Amy Coney Barrett: (03:14)
Liam is smart, strong, and kind, and to our delight, he still loves watching movies with mom and dad. Ten-year-old Juliette is already pursuing her goal of becoming an author by writing multiple essays and short stories, one of which she recently submitted for publication. And our youngest, Benjamin, is at home with friends. Benjamin has down syndrome and he is the unanimous favorite of the family. He was watching the hearing this morning, I’m told, and he was calling out our names as he saw the kids in the back. My own siblings are here, some in the hearing room and some nearby. Carrie, Megan, Eileen, Amanda, Vivian, and Michael are my oldest and dearest friends. We’ve seen each other through both the happy and hard parts of life. And I am so grateful that they are with me now. My parents, Mike and Linda Coney, are watching from their New Orleans home. My father was a lawyer and my mother was a teacher, which explains why I became a law professor. More important, my parents modeled for me and my six siblings, a life of service, principle, faith, and love.

Amy Coney Barrett: (04:27)
I remember preparing for a grade school spelling bee against a boy in my class and to boost my confidence, my dad’s saying, anything boys can do, girls can do better. And at least as I remember it, I spelled my way to victory. I received similar encouragement from the devoted teachers at St. Mary’s Dominican, my all-girls high school in New Orleans. When I went to college, it never occurred to me that anyone would consider girls less capable than boys. My freshman year, I took a literature class filled with upperclassmen English majors. And when I did my first presentation, which was on Breakfast at Tiffany’s, I feared I had failed, but my professor took the time to talk to me. She filled me with confidence about how well I had done and she became a mentor. And when I graduated with a degree in English, she gave me Truman Capote’s collected works as a gift.

Amy Coney Barrett: (05:22)
Although I considered graduate studies in English, I decided that my passion for words was better suited to deciphering statutes than novels. I was fortunate to have wonderful legal mentors. In particular, the judges for whom I clerked. The legendary Judge Lawrence Silverman of the DC circuit gave me my first job in the law and he continues to teach me today. He was by my side during my Seventh C hearing. He swore me in at my investiture and he’s cheering me on from his living room right now. I also clerked for Justice Scalia and like many law students, I felt like I knew that Justice before I ever met him, because I had read so many of his colorful, accessible opinions. More than the style of his writing though, it was the content of Justice Scalia’s reasoning that shaped me.

Amy Coney Barrett: (06:19)
His judicial philosophy was straight forward. A judge must apply the law as it is written, not as she wishes it were. Sometimes that approach meant reaching results that he did not like, but as he put it in one of his best known opinions, that is what it means to say that we have a government of laws and not of men. Justice Scalia taught me more than just law. He was devoted to his family, resolute in his beliefs and fearless of criticism. And as I embarked on my own legal career, I resolved to maintain that same perspective. There’s a tendency in our profession to treat the practice of law as all-consuming, while losing sight of everything else, but that makes for a shallow and unfulfilling life. I worked hard as a lawyer and as a professor, I owed that to my clients, to my students and to myself, but I never let the law define my identity or crowd out the rest of my life.

Amy Coney Barrett: (07:30)
A similar principle applies to the role of courts. Courts have a vital responsibility to the rule of law, which is critical to a free society, but courts are not designed to solve every problem or right every wrong in our public life. The policy decisions and value judgments of government must be made by the political branches, elected by and accountable to the people. The public should not expect courts to do so and courts should not try. That is the approach that I have strived to follow as a judge on the Seventh Circuit. In every case, I have carefully considered the arguments presented by the parties, discussed the issues with my colleagues on the court and done my utmost to reach the result required by the law whatever my own preferences might be.

Amy Coney Barrett: (08:31)
I try to remain mindful that while my court decides thousands of cases a year, each case is the most important one to the litigants involved. After all, cases are not like statutes, which are often named for their authors, cases are named for the parties who stand to gain or lose in the real world often through their liberty or livelihood. When I write an opinion resolving a case, I read every word from the perspective of the losing party. I ask myself how I would view the decision if one of my children was the party that I was ruling against. Even though I would not like the result, would I understand that the decision was fairly reasoned and grounded in law. That is the standard that I set for myself in every case. And it is the standard that I will follow so long as I am a judge on any court.

Amy Coney Barrett: (09:33)
When the President offered me this nomination, I was deeply honored, but it was not a position I had sought out and I thought carefully before accepting. The confirmation process and the work of serving on the court, if confirmed requires sacrifices, particularly from my family. I chose to accept the nomination because I believe deeply in the rule of law and the place of the Supreme Court in our nation. I believe Americans of all backgrounds deserve an independent Supreme Court that interprets our constitution and laws as they are written. And I believe I can serve my country by playing that role.

Amy Coney Barrett: (10:19)
I come before this committee with humility about the responsibility that I have been asked to undertake and with appreciation for those who have come before me. I was nine years old when Sandra Day O’Connor became the first woman to sit in this seat. She was a model of grace and dignity throughout her distinguished tenure on the court. When I was 21 years old and just beginning my career, Ruth Bader Ginsburg sat in the seat. She told the committee, “What has become of me could only happen in America.” I have been nominated to fill justice Ginsburg’s seat, but no one will ever take her place. I will be forever grateful for the path she marked and the life she led.

Amy Coney Barrett: (11:10)
If confirmed, it would be the honor of a lifetime to serve alongside the chief justice and seven associate justices. I admire them all and would consider each a valued colleague and I might bring a few new perspectives to the bench. As the president noted, when he announced my nomination, I would be the first mother of school-age children to serve on the court. And I know that it would make Senators Young and Braun happy to know that I would be the first justice to join the court from the Seventh Circuit in 45 years. I would be the only sitting justice who didn’t attend school at Harvard or Yale, but I am confident that Notre Dame could hold its own and maybe I could even teach them a thing or two about football.

Amy Coney Barrett: (11:56)
As a final note, Mr. Chairman, I would like to thank the many Americans from all walks of life who have reached out with messages of support over the course of my nomination. I believe in the power of prayer and it has been uplifting to hear that so many people are praying for me. I look forward to answering the committee’s questions over the coming days, and if I am fortunate enough to be confirmed, I pledged to faithfully and impartially discharge my duties to the American people as an associate justice of the Supreme Court.