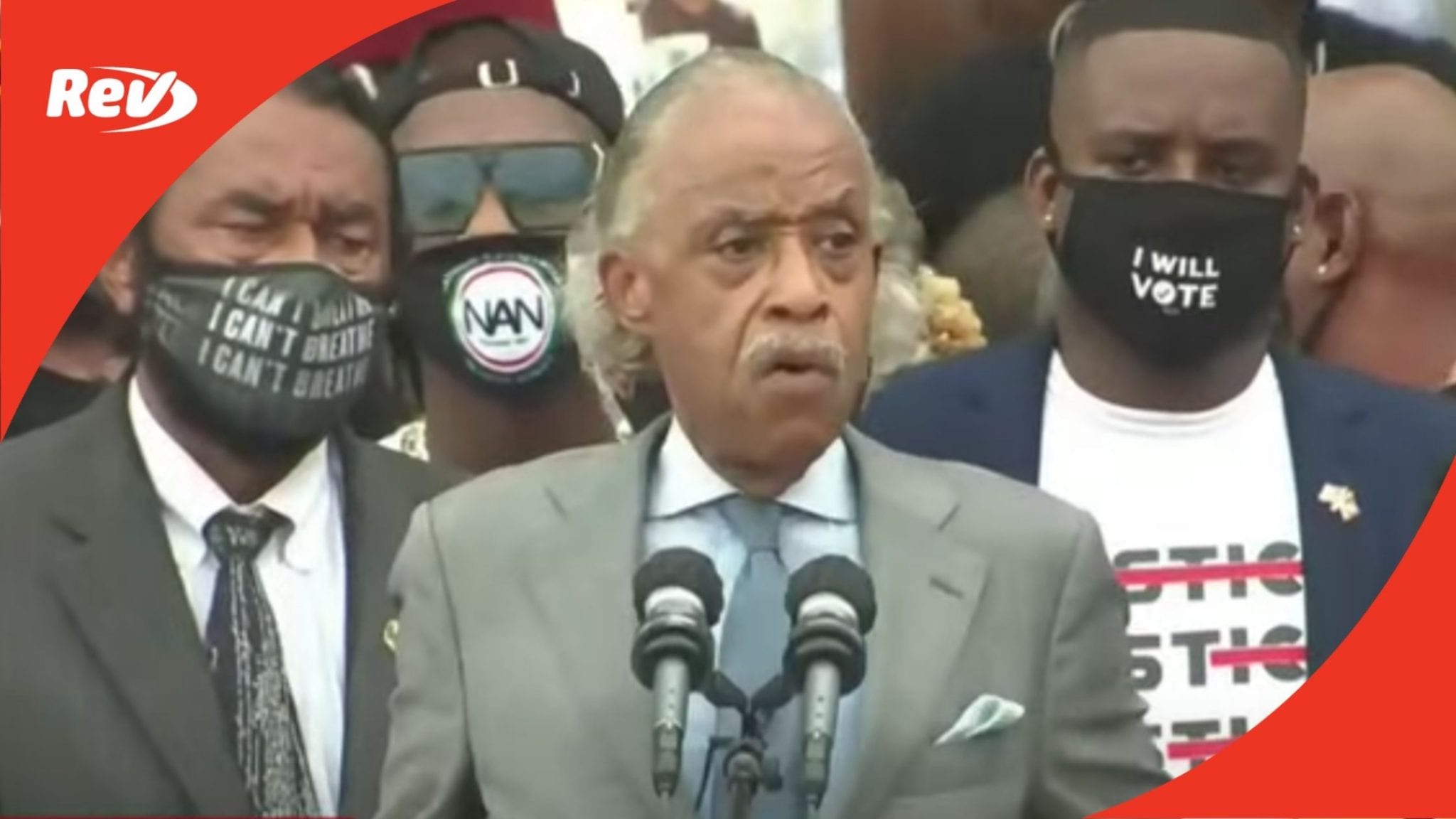 Reverend Al Sharpton spoke at the 202o March on Washington event. Read the transcript of his remarks here.

Reverend Al Sharpton: (00:00)
57 years ago in 1963, there was a struggle in Birmingham, Alabama. There was the assassination of Medgar Evers, the head of the Mississippi NAACP. In the middle of struggle and murder, they came to Washington to demand that the federal government give them a civil rights act and voting rights. They marched that day, in a hot blistering day like today, saying that as we struggle, we need legislation. And they stayed on that movement until they got the Civil Rights Act of 1964 and the Voting Rights Act of 1965.

Reverend Al Sharpton: (01:57)
Because they came in ’63, we were able to come back in 2020, riding in whatever we wanted to ride, staying in whatever hotels was available. They opened the door for us, but there are still some doors we have to open and some people we’ve got to straighten out. 2020. We must deal with those that want to rob our right to vote. And even though we are here in the midst of a pandemic, socially distanced and telling y’all to distance, and I’m keep saying spread out, we wanted to come to show with our bodies that enough is enough.

Reverend Al Sharpton: (03:02)
When I was headed to George Floyd’s funeral, I talked with Martin III, and I said, “You know, maybe we need to go back to Washington.” He said, “Well let’s talk it out, Reverend Al.” As I was giving the eulogy, I announced as much. We didn’t know how we were going to do it, how we were going to plan it, how many would come, but we did it.

Reverend Al Sharpton: (03:40)
Why are we in Washington? I’ve talked with one of the leading minds of our nation, Dr. Michael Eric Dyson. And he told me that, “Reverend Al, you got to understand that until there’s federal legislation, every state will do what it wants to do.” We have passed, in the House of Representatives, the George Floyd Policing and Justice Act, now we need to pass that act in the Senate. We need Mitch McConnell and the US Senate to meet on the George Floyd Policing and Justice Act or we’re going to meet you Senators at the polls in November 3rd. Whether we’ve got to mail in, walk in, ride in, crawl in, we want our bill passed.

Reverend Al Sharpton: (04:50)
Several weeks ago, John Lewis, an outstanding Congressman, made his transition. The last time Martin and I were here, he was with us, John Lewis. He and Reverend Hosea Williams and Amelia Boynton were beaten on the Edmund Pettus Bridge, tear-gassed. That led to the Selma, the Montgomery March that got us the right to vote. And that right lasted until 2013 when they took and gutted out the middle of that bill, taking away the map. Well, we come to Washington saying how do you memorialize John Lewis and allow the bill that he stood for us to die? We want the John Lewis Voting Fights Bill for the Congress.

Reverend Al Sharpton: (08:09)
I wondered why. I asked Dr. Dyson, why did they have the March at Lincoln’s Memorial? Why didn’t they go to the Jefferson Memorial? Why didn’t they go to do the Washington Monument? And he told me, “You got to understand, Reverend Al, 100 years before ’63, 1963, was 1863.” 1863, Abraham Lincoln signed the Emancipation Proclamation. He promised us full citizenship if we fought to save the union. He promised us 40 acres and a mule. We never got the full citizenship. We never got the reparations. We come to Lincoln because you promised, Mr. Lincoln, and the promise has been broken. And we come like Dr. King came 57 years ago to say we are tired of broken promises.

Reverend Al Sharpton: (09:30)
Some say to me, “Reverend Al, y’all ought to denounce those that get violent, those that are looting.” All of the families have denounced looting. What we haven’t heard is you denounce shooting. We will speak against the looting, but when will you speak against wrong police shooting?

Reverend Al Sharpton: (10:10)
I remember Reverend Dr. Wyatt Tee Walker sat with Reverend W. Franklyn Richardson, who spoke today, and sat us down and said that after the Montgomery boycott and they had gone to Albany, Georgia, and the movement stalled because in Albany, they treated them with a certain kindness. And they said they wanted to find someone that would demonstrate the raw disregard for rights. And as they did, they went all over the South. And Reverend Fred Shuttlesworth told them to come to Birmingham because there was a police chief there named Bull Connor, and Bull Connor would act in a insensitive and brutal way.

Reverend Al Sharpton: (13:00)
This is the time. This is the time for legislative change. This is the time for us to vote like we never voted before. And don’t just vote for the top of the ticket, vote all the way down. Go down from the top to the bottom. Vote all the way to the dog catcher. We want to get rid of anybody that’s in our way because our parents died to give us the right to vote. You can mess with the mail, but it ain’t the sacrifice that Chaney, Goodman, and Schwerner gave. Out vote is dipped in blood. Our vote is dipped in those that went to their grave. We don’t care how long the line, we don’t care what you do, we’re going to vote, not for one candidate or the other, but we going to vote for a nation that’ll stop the George Floyds, that’ll stop the Breonna Taylors.

Reverend Al Sharpton: (14:12)
They say when George Zimmerman was acquitted for the murder, when he was acquitted for the murder of Trayvon Martin, three young genius sisters wrote the slogan Black Lives Matter. And it resonated. Why did it resonate? Because too long you acted like we didn’t matter. They said, “Well, everybody matters,” but everybody hasn’t mattered the same in America. The reason we had and still have to say Black lives matter is because we get less health care like we don’t matter, we go to jail longer for the same crime like we don’t matter, we get poverty, unemployment double the others like we don’t matter, we’re treated with disrespect by policemen that we pay their salaries like we don’t matter. So we figured we’d let you know whether we tall or short, fat or skinny, light-skinned or dark-skinned, Black lives matter and we won’t stop until it matters to everybody.

Reverend Al Sharpton: (16:09)
Let the sister. If she want to hold up her fist, leave her alone.

Reverend Al Sharpton: (16:24)
Let me say, as we hear from some of the victims and as we get ready to march over to the King Memorial, 1963, Dr. King talked about he had a dream. Today, we heard from his heir and his son, Martin Luther King III, his beautiful wife, Arndrea, and his granddaughter, Yolanda. And they are, in their bloodline, the children and grandchildren are the dreamer. But we come in the same spiritual lineage because I want this country to know that even with your brutality, you can’t rob us of our dreams. Your bigotry can’t rob us of our dreams because we’ve always had to dream beyond our circumstance.

Reverend Al Sharpton: (17:34)
We always had to dream of being what we would not allow to be. We are the dream keepers, which is why we come today, Black and white, and all races and religious and sexual orientations, to say this dream is still alive. You might’ve killed the dreamer, but you can’t kill the dream because truth crush [inaudible 00:18:03] shall rise again. We going to rise never to fall again. We going to stand up, even when our legs are tired. We going to make this dream come true.

Reverend Al Sharpton: (18:22)
Let me say this. Let me say this as we close. Shh. I want everybody to be on orderly. Let me say this. We all should leave here committed to keeping this dream alive. I want everybody that went to the website of NationalActionNetwork.net that wants to help us on election day be poll watches to protect now vote. I want you that will be signing up. Early voting starts in two weeks. We’re on a nonpartisan [inaudible 00:00:19:18]. We want to put people all over this country. They want to suppress our vote. We’ve got to have foot soldiers that will protect the vote and that will be out there.

Reverend Al Sharpton: (19:30)
And I want you to say to yourself that you could have been so much more. You had ideas and dreams, not only as a race, but as a person, but society had their knee on your neck. We could have developed and been as successful as others, but society had their knee on our neck. But we’re not going to lay and submit no more. We are not going to take it. Some have different tactics, but we all are rising up. You going to get your knee off our neck. If we got a march every day, if we got a vote every day, we will get your knee off our neck. Enough is enough. Enough is enough. Enough is enough. No justice.