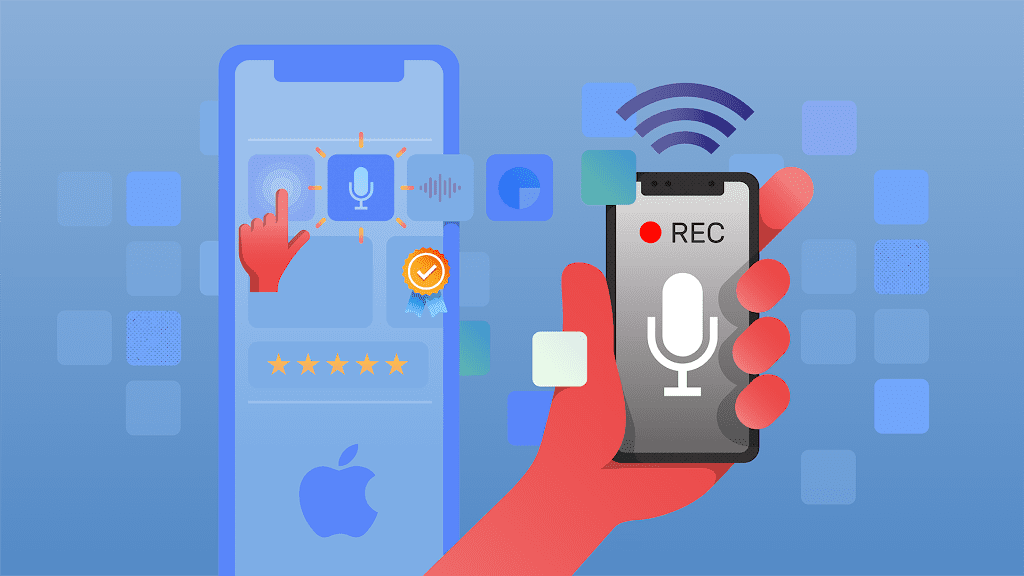 Gone are the days when you needed a separate electronic device for recording important information. Now you can use your iPhone and an app to take care of those tasks. Voice recording has grown in popularity and is used for a multitude of reasons.

Students record important lectures rather than taking written notes, musicians record practice sessions, writers and journalists capture interviews, and many people simply record their own thoughts and ideas so they aren’t forgotten.

Regardless of the reason you want to record audio, there is a voice recorder app iPhone users can download (many of them free) which will get the job done right. Keep in mind that not all apps are created equal and the app that is best for you will depend on what you need to use it for.

In case the name didn’t give it away, the Rev Voice Recorder is our very own free voice recorder app. Since it was built based on feedback that came directly from our customers, it’s consumer-oriented and easy to use. YOu can find it available for download on iPhone and Android.

There are many things to love about it making it a popular choice among users looking for a great voice recording app. It will always be free to download and record audio files using the Rev Voice Recorder, and it’s as simple as pressing a button to purchase transcripts any time you need them for $1/audio minute up to 30 minutes at a time. A great feature to have at your fingertips when you need to directly quote or tease insights out of an audio recording, and a feature that makes the app a favorite among journalists and market researchers.

iTalk is a simple-to-use, voice recorder app that records audio files and allows the user to share them straight to SoundCloud. The basic version is free and allows you to record and listen to the files only. You can make an in-app purchase to unlock many additional features including control options such as reverse and fast forward.

The iTalk voice recorder app is a great choice for simple recording needs like lectures, interviews, and other simple recording tasks. If you need to email your recordings to someone right after making them, this may not be the app for you but otherwise, we find that it is a great app for basic recording that provides everything you need.

All iPhones come pre-loaded with Voice Memos, a voice recording app that has a nice array of features that work well for most basic users including file trimming if the video is a little too long. You can easily find this app by going to your iPhone’s “extras” icon on the home screen. Seeing as this voice recorder app is already pre-installed, it is a good place to start if you are just getting started in the voice recording world, but as you increase your skills you will more than likely want to upgrade to a better, more versatile app. There are several things to like about this app.

Learn How to Transcribe iPhone Voice Memos to Text

AudioShare is a cool voice recorder app that allows you to record along with adding music to your recordings. It is the perfect app for musicians and songwriters and allows you to use your iPhone to make music. There is not much you can’t do with this fantastic voice record app.

With a name like Awesome Voice Recorder, you expect the best and this app delivers. There are some advanced features AVR offers that get on our top ten list such as tagging, combining two or more files together, and many others. It has a simple layout that is relatively simple to use but may prove a little challenging at times for brand new users.  There is a free version as well as a paid upgrade to AVR Pro for $4.99.

If you are looking for the perfect app for recording lectures for school, the Voice Recorder and Audio Editor is just right. Not only can you record the lectures but with a purchased upgrade on this handy app you can get them transcribed as well with an 80% accuracy rate!

What We Liked About It

College students of all ages will appreciate the ease in which AudioNote2 makes recording and taking notes for class. This app is basically a notebook in digital form that has a sound recorder as well.

Once you start the recording, the notes will be time-stamped, highlighted, and saved in iCloud. Taking notes in class will never be the same. There is a free version as well as a paid version where you can enjoy upgrades including importing audio from the phone, and increased recording quality.

HT Professional Recorder is the ideal voice recorder app for business people that want to record meetings or students wanting to record their class lectures. There are some really unique features in this app including the ability to record conversations in larger rooms even if people are talking close to the phone.  Once you hit record, the app will auto-amplify the voices allowing it to pick up speakers that other apps may not be sensitive enough to catch.

Another great voice recorder app for musicians and songwriters is the Multi-Track Song Recorder that allows users to record as much as four different sounds and then overlays them on top of each other. Once this is completed, the files are combined and can be edited to play together or start separately.

The simple user interface and other great features make this a favorite among musicians that want to put entire music tracks together. There is a free version and the company offers in-app purchases for additional upgraded features.

Last but certainly not least is the Voice Record Pro, one of the more advanced voice recorder apps that you can get for iPhones. Many great features come with this app making it a great choice for journalists, writers, and even personal use.

One of the most attractive features of this app is the ability to customize the attributes of your recordings. You will be prompted to do this once you press record. This app is free and offers in-app purchases for additional features.