Meet a Revver: This Family-First Captioner from ‘Bama 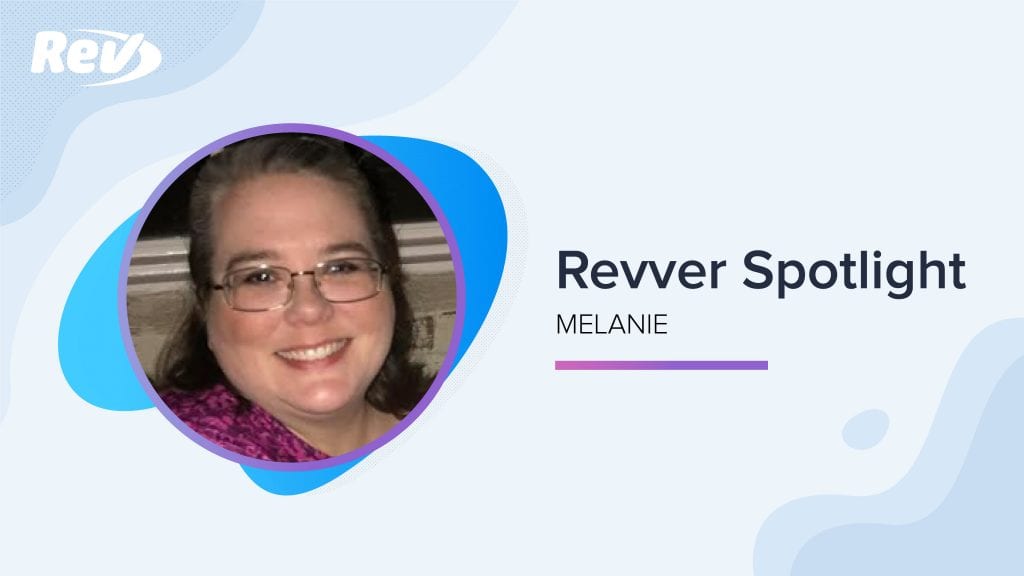 Name: Melanie
From: Alabama (Not too far from Auburn), U.S.A.
Time With Rev: Since August, 2017
Service Line: Captions

Tell us about your history with Rev!

I started in August 2017 with transcription. I’d heard about it from a fellow homeschooler who had recommended it as a home job and I needed something flexible with all that going on. I put in the TC application and got in, and it went pretty well. I graduated early, which I have learned since then is not a good thing. Haha. But I was feeling pretty good about myself. “Oh, I graduated early!”

But now you’re a captioner, right? A pretty fantastic one, we hear.

I heard about captioning after a few months in transcription by browsing the forums. I very carefully put in my application, because I knew it was one and done. I made it in, and captioning has been my home ever since! When my kids were small, my husband worked in an insurance company in their computer room that ran 24 hours a day. He worked an evening shift, so he would be free in the mornings. We had a small house, and I wanted to watch the news in the morning, so I would turn on the captioning so that I could catch everything that was being said, and it helped my kids learn to read. Last year, I was picked as a CP grader!

Apply to Freelance for Rev

Well, my youngest has since graduated. Now, I have my father-in-law here in town in a care home. Up until that time not too long ago, I’d had a lot of problems with having to go to his house very frequently to help him as he aged. My mother also lives three hours away, and she’s elderly. She has health issues and needs me there from time to time. For my father-in-law, my husband can help with things. The kids can help with things. But for my mother, I’m the one.

Sounds like Rev’s a great fit compared to a 9-5.

Yes, I need the flexibility that I know I don’t have to do any minutes whatsoever during the week, if I can’t, and I’m not going to be punished as long as I stay on top of my metrics, those 120 day metrics. I know everything’s good. I love the fact that it pays every week, too.

What have you liked about Rev the most?

I really love the flexibility, and I love the camaraderie in the forums. It’s just been a very positive experience for me.

What do you do for fun?

I’m trying to get back into reading. I used to read all the time. But the internet has kind of taken over on that. I like television. I like series television. I like fiction. I’m kind of a theater nerd. I like Broadway music, so I have that playing when I’m doing other things. I have church every week. I like to read, watch TV. I’m just kind of a homebody.

How about your kids?

Well my children are adults now. My youngest is in college and working. The oldest, he still lives here. We have a basement apartment, and for right now, he’s still living there. But he has a good job, and he’ll be moving out probably within the year. But it’s good to still have him around for as long as whatever they need.

What was your professional life like before joining Rev?

Before I got married, I actually worked … and it sounds so strange to tell people, but I worked in a cemetery office.

I was hired to do their accounts receivable on the computer. This was in the early ’90s. Nobody there knew anything about computers. The previous lady who’d been there had convinced the other lady in the office that, “You could push one button, and you’d delete everything on the computer.” So she was terrified of the computer. My job was to go in and put in their old contracts that had been done in years previous.

We gotta know more about this job…

I put records in their system and put in all of the new stuff, as well. After I’d been there about a year, it was a very small office, so every time a person came in or called, it was expected that if nobody else was around, you had to help. So I did start doing inside sales, as well. Whenever anybody came in pre-need or at-need, then I would help them out with that. I earned commission off of that. I actually really enjoyed it. I was 19 when I started there. Didn’t know anything about the business. I just thought, “Well, you know, it’s an office job. I probably can do that.” But I actually fell in love with it. I really liked helping the families there.

I’m sure it wasn’t without its challenges!

Oh definitely. Most people are just so sweet during that time, and you can’t help but feel for them. I really enjoyed helping them. If I hadn’t moved away because of getting married, I probably would have stayed at least part-time. But then I got married, and we moved two hours away. We lived there for 12 years, and I raised my kids. Homeschooled them all the way through. I have a big gap in my resume is what I’m saying.

Like I said, I’m kind of a homebody. I am more of an introvert than an extrovert. I enjoyed working in an office before I got married, but it was a small office. It’s not that I don’t like being around a lot of people all the time, but it drains me to be around people all day long. So I like being able to be in my little cozy insulated corner, and to be in my little bubble and do my own thing.

Don’t we all! Anything else about what you love?

I love the variety. And, of course, that all comes down to customers. So I appreciate whoever takes care of all of that sales and marketing to bring in customers. Kudos to them because they bring in a lot just so much variety. Overall, as far as captioning goes, things go pretty swimmingly.