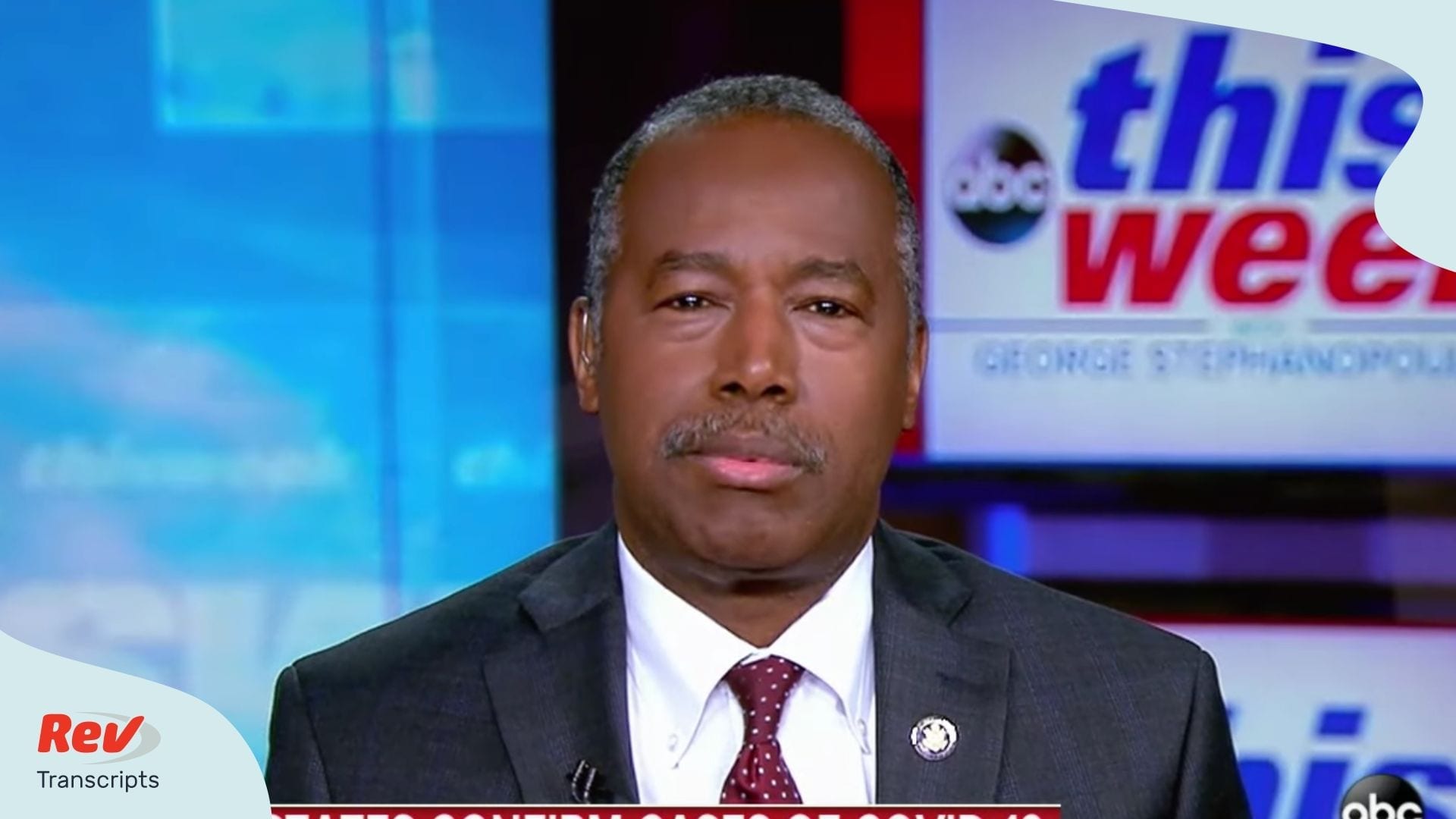 Speaking about the Grand Princess Cruise ship where 21 passengers tested positive for COVID-19, Ben Carson said he doesn’t “want to preview the plan right now” in an interview with George Stephanopoulos. Read the full transcript of the interview.

George S.: (00:00)
We begin with the Coronavirus Crisis. Here is what we know right now, the number of cases has climbed past 100,000 in more than 100 countries. Italy announced overnight that the Northern region of that country is now on lockdown, affecting a quarter of the population in the heart of its economy. Here at home, the virus is spreading coast-to-coast, cases in more than 30 States, at least nine governors have declared states of emergency, more than 400 confirmed cases in the US, at least 19 deaths. And the economic impact is spreading beyond Wall Street with more events canceled, schools closing, travel restricted, and major companies urging employees to work from home.

George S.: (00:38)
So, we begin this morning with, Dr. Ben Carson HUD Secretary, and a member of the President Trump’s Coronavirus Task Force. Secretary Carson, thank you for joining us this morning.

George S.: (00:47)
There is so much evidence mounting that this virus is moving faster than measures to contain it here in the US. One expert told the American Hospital Association, that close to 100 million Americans could eventually be infected with the virus. You’ve said you want to be transparent, that you don’t want to sugarcoat the news. Should Americans be braced for these kinds of numbers?

Ben Carson: (01:08)
There is no question that we should be informed about how we should manage our own lives. It’s very important for people to understand that this virus is like other viruses, it should be treated the same way. So, we have flu seasons that come up frequently and there is certain precautions that you take during that time to make sure that you don’t contract the virus.

Ben Carson: (01:32)
Bear in mind, that there is a certain segment of our society that’s particularly vulnerable. Those will include people who have underlying medical conditions, and elderly, and particularly elderly who have underlying medical conditions and so certain precautions should be taken. If we take those precautions, then we have much more ability to contain the spread of the disease.

Ben Carson: (01:58)
Also, it’s very important for people to understand that the vast majority of people who actually contract the virus are only going to have flu-like symptoms or less. Many of them will be asymptomatic altogether. So, there is a little bit of exaggeration in terms of what happens if you contract the virus.

George S.: (02:22)
That’s not what I was asking. I think those are important cautions you mentioned right there, but is it an exaggeration to say that up to 100 million people could be affective? I’m trying to get a sense of your view on the magnitude of this possible crisis.

Ben Carson: (02:34)
I think it’s possible for large numbers of people. There is no question that more people will be detected as we do more testing. But, you can look at worst case scenarios, you can look at best case scenarios, the thing that needs to be understood is that we are working very hard looking at all the evidence on a day-by-day basis and making recommendations based on that.

Ben Carson: (03:03)
We need to be working together, federal, state and local health officials and the medical professionals, who are very good in this country, by the way. They are the ones who are making the determination about who needs to be tested.

George S.: (03:19)
Well, and there are questions about the availability of the tests as well. As the president has said that, “Anyone can get it if they wanted it.” It turns out that it’s going to be weeks before everyone has access to a test. Governor Cuomo here in New York was complaining about the bottlenecks in the testing. Let’s listen.

George S.: (03:55)
Okay. What’s your response to Governor Cuomo and what kind of assurances can you provide the tests are on the way?

Ben Carson: (04:02)
Well, over a million tests were shipped out already this past week. Tomorrow, another 640,000 will be available. Those are only the ones that are being dealt with on a federal official level. They’re also tests being created by the veteran’s hospitals and most of the academic centers have them. So there are a lot of tests. But the key thing is, everybody doesn’t need a test and that should be something that should be determined by the medical professionals who are administering the test.

George S.: (04:44)
As you know, the Grand Princess is docking, the cruise ship is docking in Oakland tomorrow. What plan is in place to deal with the 3,500 people on board?

Ben Carson: (04:54)
The cruise ship personnel, and as you know, the vice president met with the CEOs of a major cruise ship companies yesterday and they are coming up with a plan within 72 hours of that meeting.

Ben Carson: (05:14)
The plan will be in place by that time, but I don’t want to preview the plan right now.

Ben Carson: (05:26)
I think it needs to all come from a solitary source. We shouldn’t have 16 people saying what the plan is.

Ben Carson: (05:36)
Particularly when it hasn’t been fully formulated.

George S.: (06:49)
Those guidelines are there for a reason. You’ve mentioned what people should be doing, washing hands, we all know that, right now sanitizing, but we all know also that some governments and communities are taking broader measures right now. We’ve just announced overnight, Italy is on lockdown in the North. Major conferences like South by Southwest have been canceled here in the United States. Companies like Facebook and Twitter are urging employees to work from home if they can. Is it time for more extensive community-wide measures to contain this virus?

Ben Carson: (07:18)
I think it’s time for people to really indulge themselves in learning about how viruses are spread and to take advantage of that knowledge in determining what their daily activities are going to be. And as I said before, it’s very important to emphasize that there are certain groups of people who are at much higher risk than the general population and they need to take extra consideration in terms of where they’re going to be, how they’re going to mingle with the society in [crosstalk 00:07:51].

George S.: (07:51)
Sir, I get that and we all need to take responsibility for ourselves. What I’m asking you as a representative of the president and as a member of the Coronavirus Task Force, what should the community be doing? Is it time for more extensive measures? We’ve heard the president say, for example, that he’s going to continue with political rallies in the face of this. Is this sending the right message, or is it time for broader community measures to contain this?

Ben Carson: (08:13)
Again, going to a rally, if you are a healthy individual and you’re taking the precautions that have been placed out there, there is no reason that you shouldn’t go. However, if you belong to one of those categories of high risk, obviously you need to think twice about that.

Ben Carson: (09:02)
Those recommendations will be coming out from the CDC. They’re being evaluated on a daily basis. Right now, the recommendation is as I just prescribed. Go about your normal daily activities if you are healthy. If you are not healthy, think very seriously about attending places where there are crowds.

George S.: (09:32)
Hi, everyone. George Stephanopoulos here. Thanks for checking out the ABC News YouTube Channel. If you’d like to get more videos, show highlights and watch live event coverage, click on the right over here to subscribe to our channel and don’t forget to download the ABC News app for breaking news alerts. Thanks for watching.