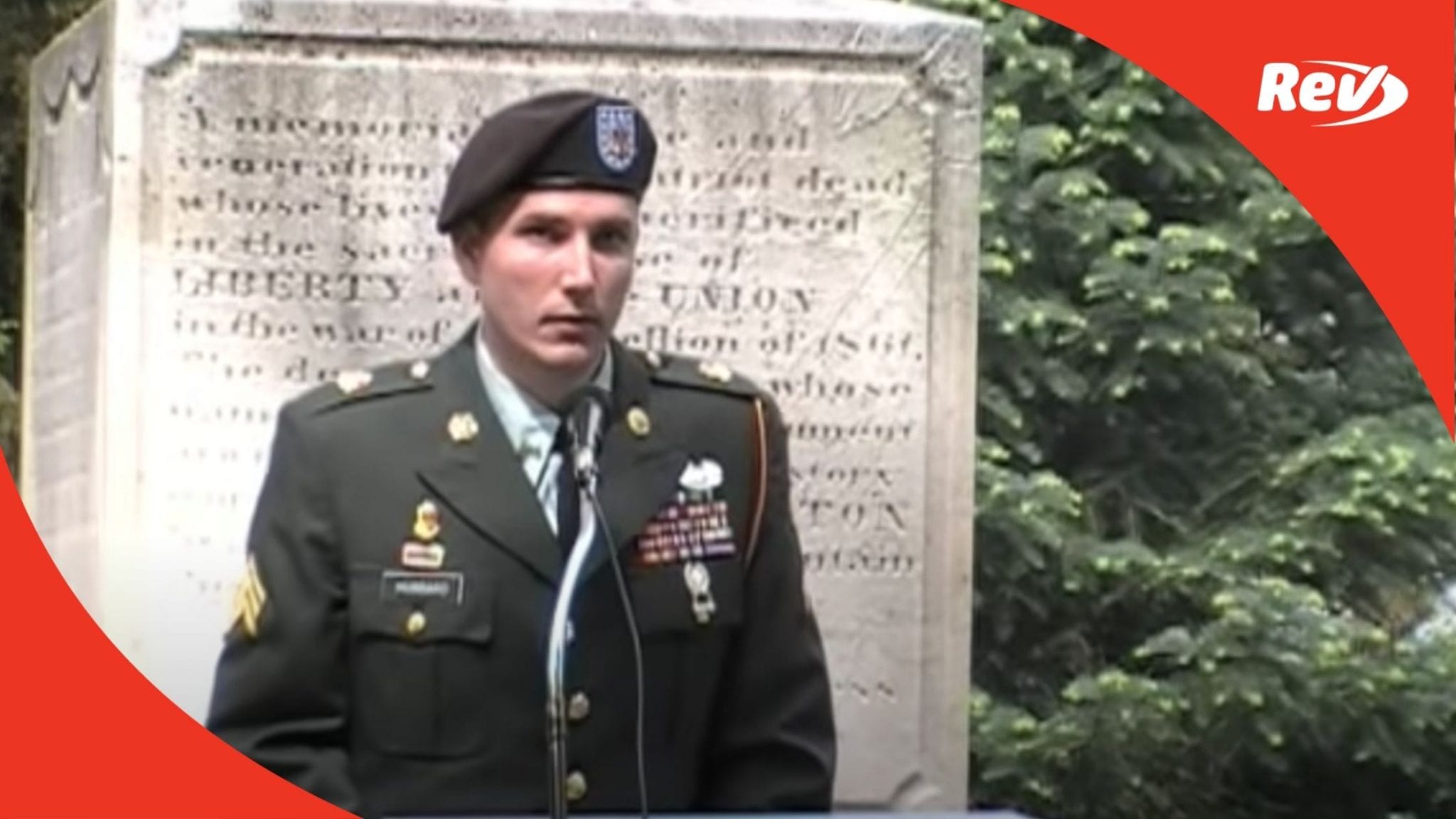 Iraq war veteran Sgt. Raymond Hubbard gave a Memorial Day speech on May 26, 2008. Read the transcript of the speech here.

Speaker 1: (00:00)
Our speaker is a native of Walworth County, having lived in Delavan, Lake Geneva, Darien and Walworth. He attended Delavan-Darien High School from 1993 to 1997. In fact, his wife, Sarah, presently teaches math at Delavan-Darien. They have two sons, Brady, 11, and Riley, 10.

Speaker 1: (00:26)
Our speaker joined the Wisconsin National Guard in 2002. He served with various units, eventually assigned to the 120th field artillery and shipped to Iraq in February of 2006. His tour of duty in Iraq was a study and story of compassion, redemption and survival. He was wounded during his tour and is a recipient of the Purple Heart. In 2007, he was designated Wisconsin’s American Legion Soldier Of The Year.

Sgt. Raymond Hubbard: (01:07)
To be honest when George Bowman, my fellow patriot, bestowed this honor upon me, it took all my will to not back down. Honoring the fallen is something so very personal that I didn’t think I could share my own grief. But if I was the first person asked, then it was my duty to not let this burden fall on someone else’s already heavy heart.

Sgt. Raymond Hubbard: (01:40)
There have been 1.6 million US soldiers that served in a combat theater in the Middle East since 2001, that is 0.5% of the current US population. If you compare that to the 2% of the populace that served in Vietnam or the 12% that fought in World War II, this seems to be a minor incident. As of March 17, 2008, there have been over 4,000 United States fatalities from Operation Iraqi Freedom, with approximately 74 of them officially declared Wisconsin sons and daughters.

Sgt. Raymond Hubbard: (03:23)
I’m sure more than a few of you know of Justin. Justin played baseball for the Clinton Cougars. Justin graduated from Clinton in 1999. Justin moved to Oregon where he met his future wife, Sarah. Justin and Sarah were married on February 28, 2004, just before Justin was deployed to Iraq. On June 4th, 2004, Specialist Justin Linden was killed when his convoy was attacked by improvised explosive devices and rocket propelled grenades.

Sgt. Raymond Hubbard: (04:01)
I have never seen so much loss and so much pride fill a man that it does with Wayne Linden, Justin’s father. Every time he thinks about his son, you see the loss and the pride in immeasurable amounts.

Sgt. Raymond Hubbard: (04:26)
I, too, have felt the loss of a soldier. Losing a soldier has affected my life in ways that I still have yet to fully understand. This soldier was not my son. No, God willing, never that. And it was not during combat with an enemy. The soldier was my father by my birth and my brother through our service and our love of our country.

Sgt. Raymond Hubbard: (04:52)
While Dan Hubbard was attending Elkhorn High School, his cousin and friend since childhood, Michael [inaudible 00:04:58] Stoplitt, was engaging democracy’s enemy in Vietnam. On November 1st, 1966, my father’s cousin was killed by small arms fire. Private First Class Michael Stoplitt’s name can be found on panel 12E, line eight of the Vietnam Memorial Wall in Washington, DC. My great cousin was the third Walworth County resident to die in Vietnam and the first of Elkhorn sons.

Sgt. Raymond Hubbard: (05:39)
My father, Dan Hubbard, enlisted in 1969 and was quickly sent into the war zone. The things he saw there, I shall not repeat for you this morning. The atrocities and inhumanity was widespread. My father saw combat, the sum of which I cannot attest.

Sgt. Raymond Hubbard: (05:57)
When he came home, he was physically and mentally disabled. Now my father had an entirely different war thrust upon him upon his return home. A war for recognition and compassion. A war fought against and for the country in which he so loved. He was denied a Purple Heart. He was denied his dignity. He was denied a clean conscience.

Sgt. Raymond Hubbard: (06:25)
By the time I turned 14, my father had given up his battles. On February 11, 1992, Dan Hubbard, my father died, nameless, faceless, another statistic of the Vietnam era. Another number. He was buried on February 14th, 1992, Valentine’s Day with his friend’s Purple Heart pinned on his chest.

Sgt. Raymond Hubbard: (07:21)
During my graduation from basic training at the age of 24, I felt a hand clasp my shoulder. I looked up into my father’s proud eyes and wept quietly in formation. Prior to my deployment training, I chose a picture taken of my father while he was in service to his country in Vietnam. I attached it to my bunk so he could always watch over me during my tour. On July 4th, 2006, our nation’s independence day, when a large self-propelled rocket detonated mere meters away from me, I saw my father’s face again, fighting to keep me alive.