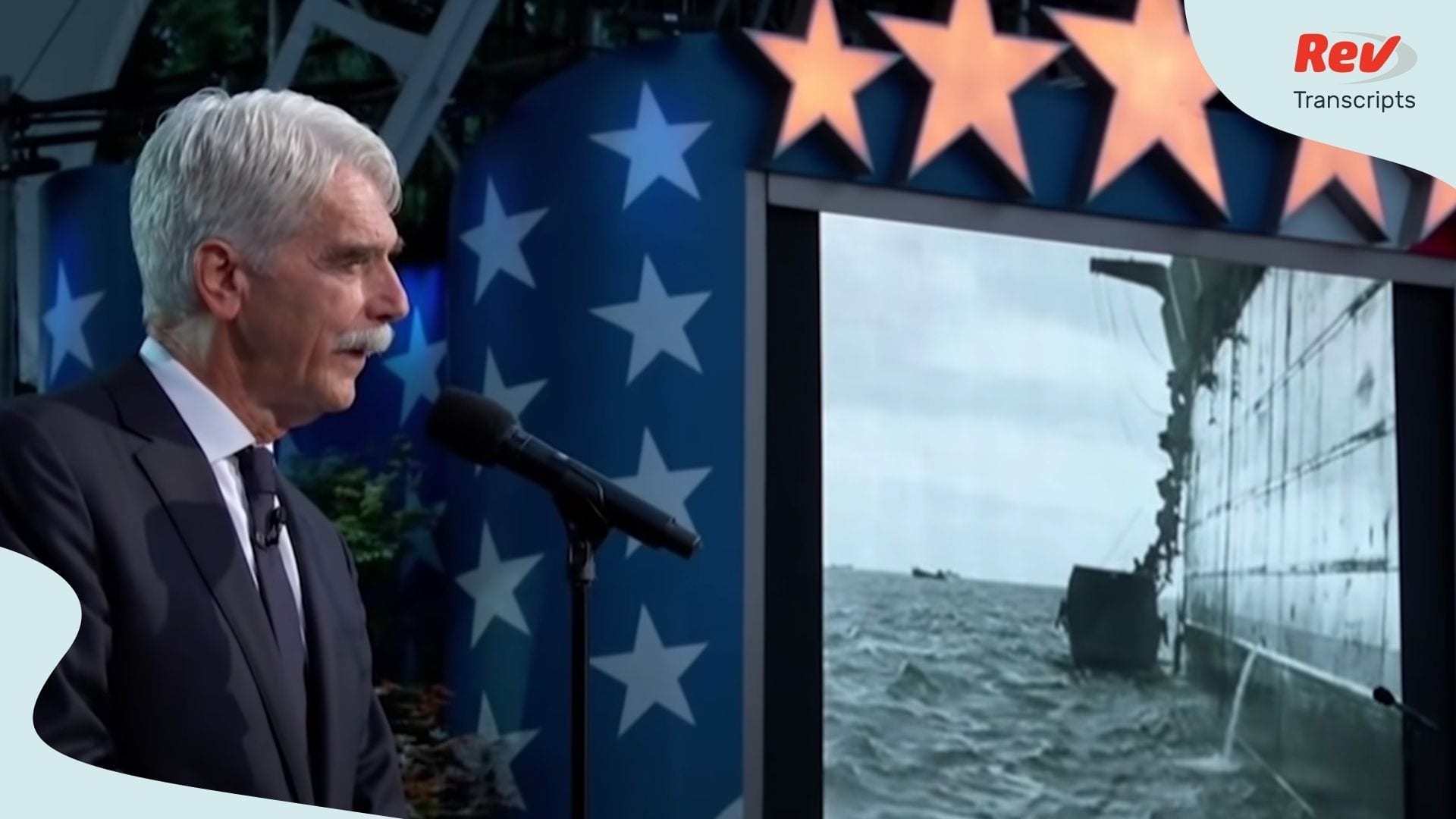 Sam Elliott gave a heartfelt Memorial Day speech on May 26, 2019, in a tribute to Sgt. Ray Lambert on the 30th National Memorial Day Concert. Read the transcript of his address here and click the timestamp links for video & an interactive transcript.

Sam Elliott: (00:08)
We were headed to Omaha beach, and I was glad. After all the fighting in Africa and in Sicily, I just wanted to get this war over with. It was daylight on the sixth. I went up on deck and found my brother Bill there. We talked about our chances and what our parents would think. About 6:00 AM, the signal came to go to stations. My brother and I promised whoever survived would take care of the other’s family, and we shook hands and went our separate ways.

Sam Elliott: (00:54)
I climbed down the nets and got into the Higgins boat with my unit. On the way in, we could hear the battleships firing and see the big shells landing ahead of us. Guys were getting sick and vomiting from the choppy water and the diesel fumes. As we got in closer, the Germans had a bird’s eye view of us coming in. We picked up machine gunfire. The bullets clanged against the metal ramp of the boat like hail. Then the big 88s on a h.ill opened up every time a shell whistled overhead, all you could hear was the sound of a banshee screaming. Boats around us were burning. I saw men on fire, even their shoes were on fire. Dead and wounded were floating in the water.

Sam Elliott: (01:47)
We had orders not to stop and pick anyone up. I told my men, when a ramp drops, hit the water hard and keep as low as you can to dodge the bullets. We sank up over our heads. That was the last time I saw most of them. 31 men jumped off that boat. Just seven of them made it to the beach. The only cover was a block of concrete the Germans had failed to clear. That’s where I set up a collection point for the casualties. Medics were trained not to dig in. We were there to see the troops and for them to see us.

Sam Elliott: (02:28)
I detailed Corporal [Raymond Laport 00:02:29] to hunker down and treat the men while I brought in the injured. Ray and I had been together since ’39. I knew I could count on him. It was total confusion, shells exploding, boats blowing up, people yelling because you couldn’t hear anything. Machine gun bullets hitting the water all around you, the roar of the boats coming in. It’s like you’re all alone in a world of a million people because you’re concentrating on what you have to do. Hadn’t gone far when I felt the bullet go through my right arm. I just kept going. I was thinking of only one thing, getting to the men who needed me.

Sam Elliott: (03:15)
There was a soldier laying right on the edge of the water. One arm was almost shot off. Every time a wave would come in, that arm would be pulled back out to sea and he’d try to reach out for it. The first thing you’re supposed to do is keep a wounded man from going into shock, but he was too far gone. Nothing I could do for him. He died in my arms. I was on my way to treat another soldier, when a piece of shrapnel the size of my hand tore a hole in my left thigh. I put a tourniquet on it, gave myself a shot of morphine and went back to work. You did the job you were trained to do. If you didn’t, you died.

Sam Elliott: (04:01)
I could feel my right arm going numb from the first bullet. Saw a guy struggling in chest-deep water, grabbed him with my good arm, just as a Higgins boat rolled in and dropped its ramp. The ramp hit me right in the back, crushed two vertebrae and pushed us both to the bottom. That’s when I started talking to the one guy I knew could help me. I said, “God, I’ve asked you many times, but just give me another chance. Let me save one more person.” And for some reason, that boat raised its ramp and backed out. Somehow I managed to drag us both to safety. I told Corporal Laport he’d have to take my place. He stood up and then he just collapsed against my shoulder. His helmet fell off and I saw the hole right in the center.

Sam Elliott: (05:01)
Everything went black after that. The next thing I knew, I was on a boat going back to England. A navy doctor lifted my dog tags and he told me, we have another Lambert here. My brother Bill’s stretcher was put right next to mine on the dock at Weymouth. He’d been on a beach with G company. We went to the hospital in the same ambulance. When I woke up, he was on the cot next to me. He looked over and said, “What are you doing here?” “Same thing you are,” I told him. And he said, “Oh God. Now what’s mother going to think?”

Sam Elliott: (05:44)
We both made it out okay. Bill lived to be 92. People who have never been in a war should understand what soldiers give up. The guys we left on Omaha Beach never had a chance to live the lives they’d dreamed of. A day hasn’t gone by when I haven’t prayed for the men we lost and their families. I still wake up at night sometimes thinking about the guys. Every man that walked into those machine guns and that artillery fire on Omaha Beach that day, every man was a hero. What kind of person would I be if I didn’t tell their stories?