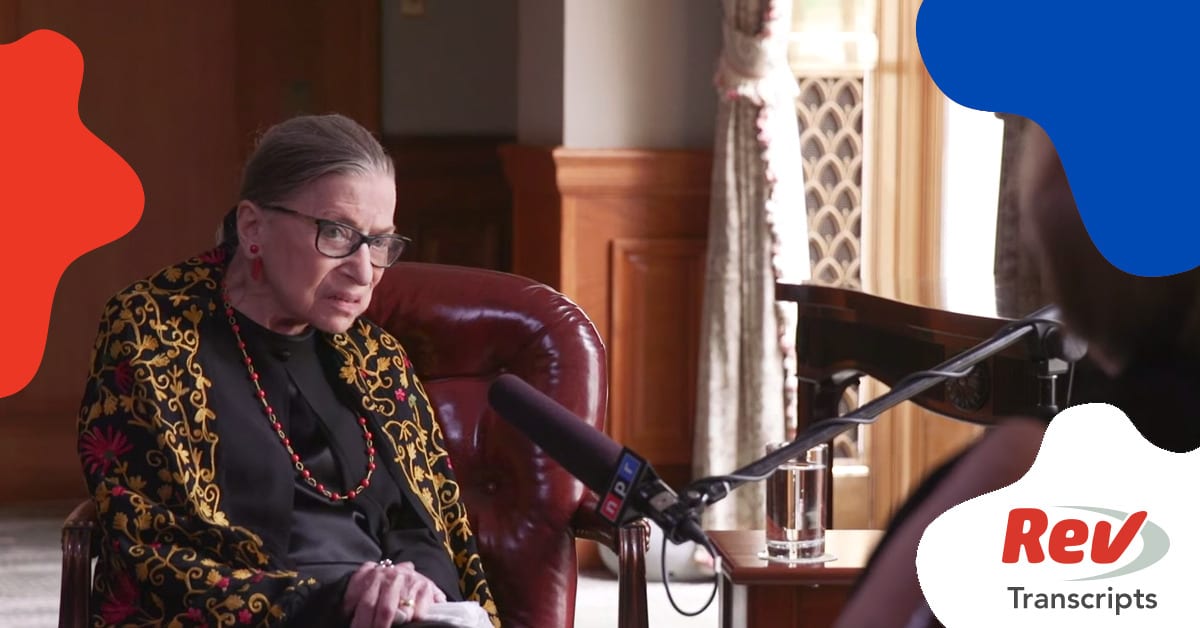 Ruth Bader Ginsburg did an interview with NPR on July 25, 2019 where she discussed the Supreme Court and her battle with cancer. See the full transcript below and click the links for video of the interview.

Nina Totenberg: (00:00)
So I thought I would start actually with Justice Stevens, because you just as we sit here doing this today, you’ve come from his little service and then his internment. You were with him a week before he died in Lisbon in Portugal. Tell me about that.

Ruth Bader G.: (00:22)
It was a wonderful week. I got to drive with Justice Stevens most of the time because I was the second eldest person attending the conference. He was in the best of humor. In the morning, the morning was all talk at the conference. As he is on the bench, he’s not a big talker, but when he does speak, it’s really worth listening to. He was enjoying whatever we did, some of the drives were rather long and we were stuck in traffic it was warm. He never complained and he regaled us with stories. His memory, one incident he said, “In such and such a case, what is it, a dozen or so years ago, I sent the lady my draft and you said that a certain footnote was over the top and I shouldn’t include it, and I agreed with. You were right, and I took it out”. To remember things like that.

Nina Totenberg: (01:45)
So you were driving with him, in your remarks today, in your remarks in one of those, as you left the ambassador’s residence with him you said something to him, what your dream was.

Ruth Bader G.: (02:02)
Yes. I said that my dream is that I will stay at the Court as long as he did. And his immediate response was, “Stay longer”.

Nina Totenberg: (02:18)
Which brings me to the main subject of our conversation. You have had surgery for cancer three times in your adult life, just about like clockwork every 10 years. But the cancer that you were treated for this past year, when you had surgery for lung cancer, it was the first time that you did it without your husband, Marty. That must’ve been very different and difficult.

Ruth Bader G.: (02:55)
It was. My first two cancer bouts, both both colorectal cancer at Washington Hospital Center, pancreatic cancer at Sloan Kettering, Marty stayed with me. He stayed with me in the hospital, sleeping on an uncomfortable couch despite his bad back. And I knew that someone was there who really cared about me and would make sure that things didn’t go wrong.

Ruth Bader G.: (03:31)
There was one day during the colon cancer bout when I was getting a blood transfusion and Marty saw that something was very wrong. He immediately yanked the needle out of me. It turned out that there was a mismatch, not in the type of blood but in some antigen. I might not have lived it if he hadn’t been there. And he encouraged me when they sent a physical therapist to get me to walk and to do whatever exercise regime they had. I didn’t want to do it. I was exhausted and Marty said, “You do it”. He was quite insistent about that.

Ruth Bader G.: (04:37)
So to have his loving care and yet his determination that I do what was necessary to heal faster, it was hard to be alone.

Nina Totenberg: (04:59)
I know that you, it was hard to be alone and you have many people who love you that you don’t know love you, that are in the greater world, but you have children who love you and friends who love you. But you are a solo act in a way these days. You more or less live by yourself and you have to take care of yourself.

Ruth Bader G.: (05:25)
One big help, my children. During the recovery period, one child or another visited every weekend. Jane and James were tremendously supportive. Also my granddaughter, the lawyer Clara visited. So I did have the support of my family and that was important. And again, encouraging me to do what I was supposed to do. In the case of lung cancer, I was supposed to walk a lot. I think starting with a quarter of a mile and a half a mile, then a mile. Some of it I could do on the treadmill.

Ruth Bader G.: (06:26)
The work is really what saved me because I had to concentrate on reading the brief, doing a draft of an opinion and I knew that had to get done so I had to get past whatever my aches and pains were, just do the job.

Nina Totenberg: (06:53)
You’re not in the same position as somebody like me. You’re a very public figure. And at the same time, you have the natural human instinct too, your health is your own business. So how do you think that through?

Ruth Bader G.: (07:17)
I might have preferred to keep my condition to myself, but I realize that because I’m a public figure, I could help make things a little better for people who are in my situation with regard to their health by saying what I was experiencing. I think it gave people courage and hope and made them feel less alone, that here’s somebody else who’s gone through the same experience. So I think it was good. In the colorectal cancer case, I did a public service advertisement with my surgeon, with Dr. Lee Smith.

Nina Totenberg: (08:17)
When you had colorectal cancer and it was your first rodeo so to speak, you said that Marty did all kinds of things to raise your spirits. What did he do?

Ruth Bader G.: (08:31)
Well, as soon as I came home and could eat again, he made wonderful meals for me. We went to, we walked around Georgetown. We walked to the Phillip’s Collection. We did some of my favorite things. Marty had a wonderful sense of humor, as you know.

Ruth Bader G.: (09:02)
Oh yes. Well, for one thing, he was my clipping service with the New York Times and the Post. I miss him every morning because I have no one to go through the paper and pick out what I should read.

Ruth Bader G.: (09:24)
Yes. One, Tolstoy’s Story. That should not have been read, but there was only time for a short story because I don’t remember where we were going. It’s about how much room does a man need? The very principal figure is avaricious and he wants to acquire more and more land. Then at the end from all of his activity, he drops dead. How much room does a man need to set up space to be buried?

Nina Totenberg: (10:04)
You do realize, as my editors wanted to ask this, that when you get a cold or a hangnail, there’s a substantial portion of the population, a large part of it female but men too, who go into a complete panic.

Ruth Bader G.: (10:23)
Well, some are not panic. There was a senator, I think it was after the pancreatic cancer, who announced with great glee that I was going to be dead within six months. That senator, whose name I’ve forgotten, is now himself did. And I am very much alive.