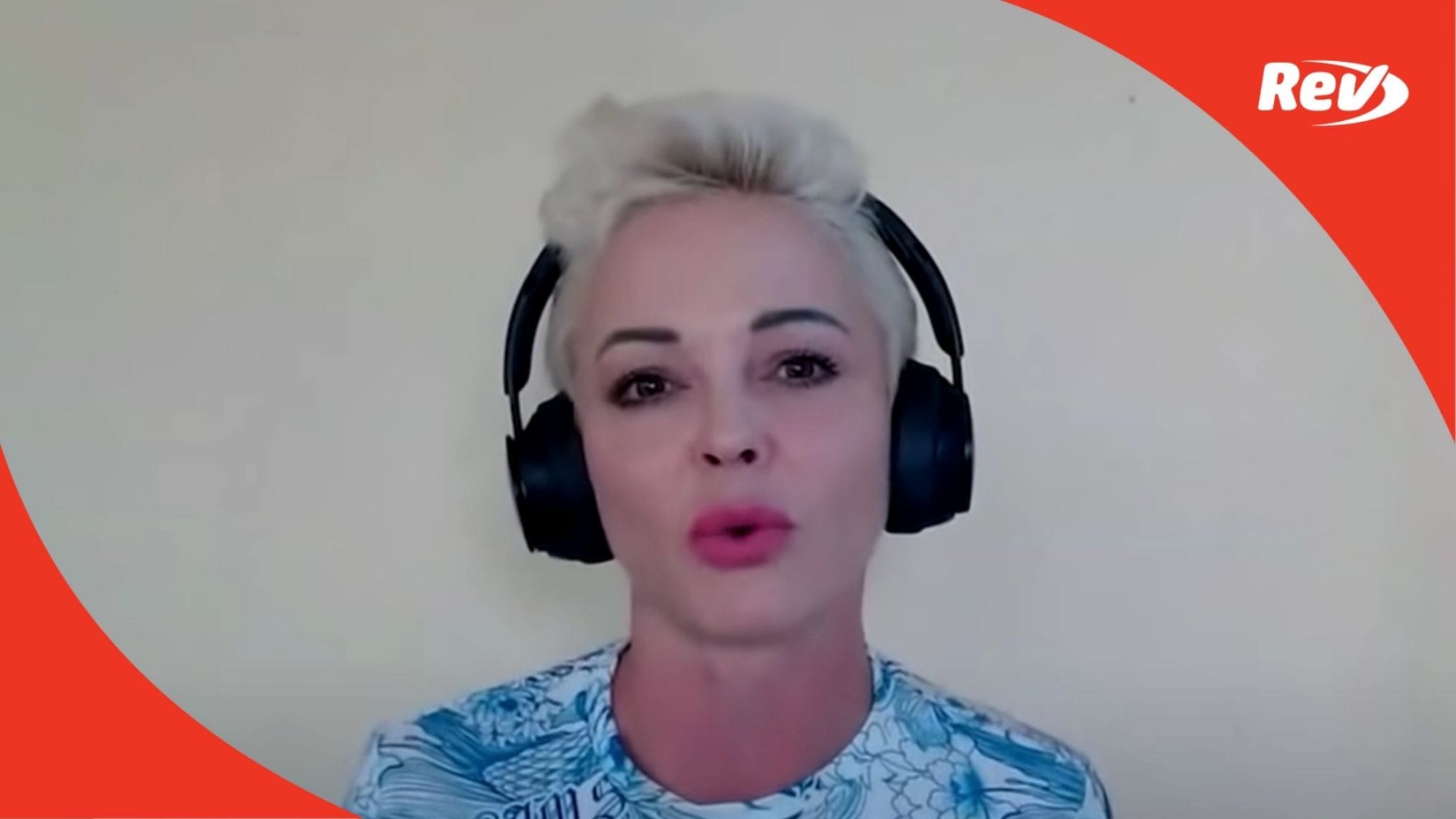 Actor Rose McGowan participated in an interview with Fox News on April 26, 2021. She discussed her choice to leave the Democratic party and said “I do believe Democrats most especially are in a deep cult.” Read the transcript of the interview speech here.

Tammy: (00:00)
Democrats control two branches of government and are attempting to control the third by packing the Supreme Court with liberal justices. On top of that, the fourth estate, the media continues to look the other way. And now, my next guest says she is fed up with the politics of it all. Joining me now with her first Fox News appearance is one of my heroes, Rose McGowan. Former actress, best-selling author, changemaker, and one of Times Magazine’s persons of the year. May I say, Rose that you are also my person of the year, if not for several years. Having been in several years, I have no doubt moving forward. Thank you so much for joining us tonight. I really appreciate it.

Tammy: (00:43)
You are known by many people based on how the media has chosen to portray you. It’s in snippets, it’s in blocks. We know that your life has been unique. You’ve had important experiences that you’ve taken action on, but not a lot of people have heard directly from you about why that’s important, what you’re doing now. You’re an entrepreneur, you’re a business woman. We’re going to talk about that soon. But talk to everyone here who may, for the first time, maybe seeing you directly after hearing your name for so long, having done such a great job in standing up for your rights, your dignity and the dignity of women everywhere. Why did you do that? And what has it meant to the quality of your life and why is it so important for everyone to understand?

Rose McGowan: (01:27)
Well, as some of you know and some of you don’t know, if you’ve heard my name or read anything on me in the media. I grew up in a cult and it was a very famous cult called Children of God. And it gave me a super power. It gave me the ability to see the control and the propaganda machine, especially in the US for what it is. And how it harms people and how the left can harm people just as much as the right. If they go very, very deep into it and ignore all other aspects of kind of reality in a way. And that you’re serving a master that might not be serving you. And I always say, I come in peace. I am not here to make people feel bad about their political choices, but I am here to say that you might be in a cult too, if you don’t know the signs.

Rose McGowan: (02:18)
And I do believe Democrats most especially are in a deep cult that they really don’t know about and aren’t really aware of. And I leave the Republican’s alone more because I do respect people more that are like, this is what we are, this is what we’re about, this is what we’re against. Whereas, I find that the Democrats are really pretty much almost against all the same things, they’re against changing the world for the better. And they’re for keeping a system in place that is for so few people and benefits so few, but they masquerade as the helpers. We would do this, the world would be perfect if only those Republicans would get out of the way. Well, okay, you’ve got control. So now what? What are you going to do to make the world better?

Tammy: (03:10)
You see, this is… It comes down to an issue of betrayal really because neither one of us are Republicans, right? I mean, we are the women that were supposed to be the beneficiaries of all of these programs and promises of the Democrats. And here we are in a world where Republicans have been demonized. And yet… I identify as a conservative. It does irritate certain people, but it really is about freedom. It’s about personal freedom, about living lives that best suit us and that’s what you’re doing as well. When it comes to the choices. Look, a great actress, you’re a writer, you are a business woman, you have a new beloved. You actually have time for a relationship and you’re happy. You’re becoming at least happier considering the nature of what you experienced from Hollywood. Is that something you regularly struggle with when it comes to being yourself and embracing who it is you’re becoming and what’s important about that?

Rose McGowan: (04:08)
I’m embracing in my life right now, really just almost healing in a way, not just for me, but for so many others. During the Me Too media period, it was just triggers for so many women and men alike, everybody really. And it was a painful period for very many people as it was for me. And my persecution and awakening from being a Democrat was so much about what I do and what I say now. And so much about realizing how hardcore of a cult it is. [crosstalk 00:04:49] And how much it does to woman and the people that says it’s going to help. Because then why haven’t they achieved anything?

Tammy: (04:54)
Well, see that’s it. And then we’re also tied to this idea of what could happen, afraid of what we would say or not say. But without being able to be true to ourselves, even after the feminist movement, still trying to conform. And that’s kind of the rub here, is this expectation that a woman like you is better off if you conform, but that is the opposite of your creativity. It’s the opposite of what would fuel… What makes the world interesting to you. For the bit of time that we have left, what advice would you give the young women listening? Of course, but it also goes to whatever age we are. With what you’ve gone through and how each day takes something new. You’ve got to adapt all the time. What advice in this new age, as we’re trying to come together and unite on the things that bring us together, what would you say to every woman watching?

Rose McGowan: (05:45)
I would say to every woman and man, or anybody watching that [inaudible 00:05:53] and your personal freedom comes at the price of you realizing how you’re being controlled and where it’s coming from and separate. I would make a list of your belief system and figure out what your belief system… What part of it is organic to you. And what part has been implanted either by Hollywood or the media or your leaders.

Rose McGowan: (06:17)
What part of it is truly yours. What’s sort of organic to you and see what’s the polyester and pull it out of your fabric. We have to examine what we believe in why. I’m going to get a lot of hay for being on Fox News. That’s just a fact. I’ve gotten people on the left yelling at me, like you go up against Biden, you go up against the Clintons, you go up…. I’m like, yes, but all of these people had, the Clintons have had a direct hand in helping one of my perpetrators who was one of the most powerful democratic donors there was and also their entree into the Hollywood world. And I have been persecuted by them. And I find that I have to even look through what had been implanted in me. So I would say, look at your own belief systems and get free. You can still believe in whatever party you want to believe in, but not to the limit where it makes it so you can not have a human conversation with every other person.

Tammy: (07:12)
And it doesn’t mean that your even your politics change. It means that you become more free within that framework. Rose, I know that as people were to follow you on social media, they’ll get an example of how to do this. Where can people find your work these days?

Rose McGowan: (07:27)
@rosemcgowan on Twitter, where I am shadow banned and suppressed. At Instagram @rosemcgowan, Instagram is kind of my softer side. Twitter I go hard, but you know, they suppressed me and so does Facebook and everybody else. It’s just because I go up against the sacred cows. It’s not supposed to go up against the New York Times. You’re not supposed to go up against the propagandists. And I think if someone is evil, they’re evil. And they should call them out, whether it’s right or left or somewhere in the middle, because they are the ones keeping us apart. The propaganda machine in conjunction with whatever party is determined to have control over our freedom. And they say, America is the land of the free. Well, we have to fight for it. I don’t conservative in my beliefs. I believe in different personal freedoms and maybe people watching this, but I can still be your friend. I can still be your ally and I can still want the best for you.

Tammy: (08:20)
Brava. This is the heroism that I was talking about. It’s beautiful. Thank you, Rose. Thank you so much for coming on. I appreciate it. And we’ll talk soon. Thank you very much for joining us tonight.