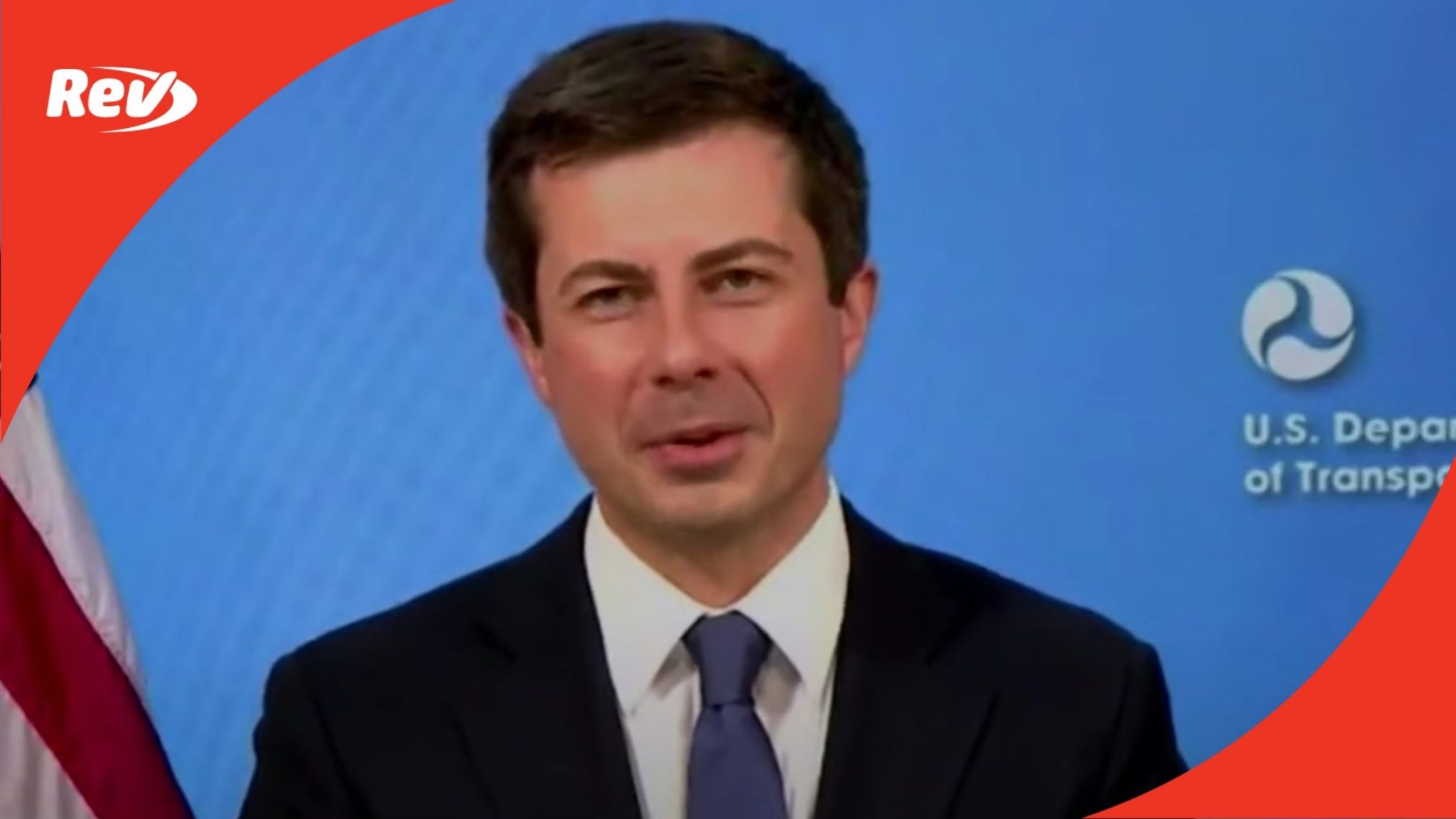 Transportation Secretary Pete Buttigieg responded to criticism of his paternity leave on The View on October 20, 2021. He advocated for paid parental leave and also addressed supply chain bottlenecks. Read the transcript of the interview here.

Whoopi Goldberg: (00:00)
One of the many things transportation secretary, Pete Buttigieg is dealing with is the supply chain crisis, that has Americans wondering when their goods will arrive, and how much sticker shock to expect this holiday season. So he’s joining us live with the latest information. So please welcome, Transportation Secretary Pete Buttigieg. Good morning, Joy, you have the first question.

Joy Behar: (00:26)
So Mr. Secretary, before we dive in, we want to congratulate you on your growing family, you and your husband Chasten recently adopted newborn twins, Penelope Rose, and Joseph August. Nice. I love that. Two of them. Why not? How did it feel to add, “Parent,” to your job title, and how are things going so far?

Pete Buttigieg: (00:50)
Well, they’re great. It’s such an incredible blessing. We didn’t know that it was going to be twins until about 24 hours ahead of time, but they just brought such a joy really into our lives.

Pete Buttigieg: (01:03)
Yeah. So I definitely had to double everything we’d been hoping for, and planning for, but what an unbelievable gift and you’re right; it’s a job description. I mean, it is work. I have a whole new appreciation now that I’m living it, for the work that is parenting, but it’s joyful work. And just, every time I look in their eyes, I just realize that the most important thing that Chasten and I will do in our lives, is be dads to these incredible, beautiful little children, our boy and our girl.

Sunny Hostin: (01:35)
Yes. Well, Secretary, you will get some sleep hopefully in a couple of months.

Sunny Hostin: (01:41)
I think so. It’ll happen soon. Let me ask you this, Mr. Secretary, Fox News host, Tucker Carlson attacked you and your family for taking paternity leave, saying that you were trying to figure out how to breastfeed. Now, Republicans claim to be the party of family values, right? Were you disappointed at the coverage of your family by the likes of media figures like Tucker Carlson?

Pete Buttigieg: (02:07)
Yeah. I mean, obviously, the negativity was unfortunate, but in a way maybe some good comes out of it too, because it’s helped us have a conversation about parental leave, and really brings out two things that are very important. First of all, every American ought to be able to get paid parental leave. That’s something the President believes, and has proposed. It’s something I believe. It ought be basic. We’re almost the only country left in the world that doesn’t have some kind of policy about this.

Pete Buttigieg: (02:35)
But then the second thing that’s also important is, when parents take that parental leave, they need to be supported in making that choice. This is important for women, who find their ability to get ahead in their careers influenced by these judgements that are being made about whether you can be a parent and an effective employee at the time. But also men, if there’s this idea that, maybe men have access to paternity leave, but it’s frowned on if they actually use it, then obviously, that doesn’t work for a marriage like mine, but also for a man who’s married to a woman that carries with it this assumption that the woman’s going to do all the work, and that just makes no sense in the 21st century.

Sara Haines: (03:16)
Absolutely. And you just referenced this, Secretary, but the United States is the only industrialized nation that does not have federal paid family leave. And while President Biden wants to address this in his Build Back Better plan, there’s no guarantee how much leave will end up in the final bill that Democrats are negotiating. How do you shed this stigma around paternity leave, and make it a priority in country?

Pete Buttigieg: (03:40)
Well, I think first of all, culturally, we do have to get across the idea that this is work. I mean, my workday as Secretary of Transportation starts at a relatively normal hour. My workday as a dad starts at about 3:00 in the morning when Chasten finally hits a sack, and it’s my turn to start that first feeding, there’s still this cultural idea, I think, out there in some places, that this is vacation and we just got to change that culture. But of course, we also have to change the laws, and that’s exactly what the President has proposed. And I don’t know exactly how the numbers shake out. When I was mayor, I wanted to do this for city employees. We wound up being able to deliver six weeks full paid leave for city employees. And I’ll tell you just as an employer, that made us much more competitive from a hiring perspective. So it’s good for business, it’s good for families, it’s good for communities, and it’s definitely good for the kids.

Joy Behar: (04:30)
Indeed. So, okay. Let’s get to this hot topic because we’ve all seen the images of cargo ships backlogged at ports along the coast, people are looking to, to you as Transportation Secretary to solve the supply chain crisis. It’s a heavy load, which is causing massive product shortages and price Hawks on everything from toys to… Christmas is coming, to gas, to groceries. Now what is causing this bottleneck, exactly? And how do you plan on fixing it? Is there any quick fix or is this a long haul we’re talking about?

Pete Buttigieg: (05:02)
So there’s no easy fix, there’s no magic wand, but there are a lot of things we can do. There are three things that are causing this: supply, demand and the pandemic. And as long as the pandemic continues, we’re going to see all kinds of disruptions, right? If COVID shuts down a port in China, or a shoe factory in Vietnam in September, you’re going to notice that at the mall in December or January, which is why the biggest thing we have to do still as a country, is put the pandemic behind us. Then you got the demand issues; the fact that Americans have more money in their pockets compared to a year ago, and where they used to maybe spend it on going to shows, or travel, they’ve been more likely to spend it on things, which is why actually we have a record number of goods coming through our ports. It’s not that we’re moving fewer goods through our system; we’re moving more than ever, it’s just not enough to keep up.

Pete Buttigieg: (05:50)
And this goes to the longer term issues that we have in our country. We’re relying on infrastructure that was built decades ago, sometimes a century ago. This is why the President has been calling, and I’ve been calling for major infrastructure investment to spend on improving those ports, improve our airports, improve our roads, and highways and railways. And we finally have a chance to do it with the President’s infrastructure bill that I hope will pass very soon in Congress.

Condoleezza Rice: (06:15)
Secretary I lived in South Bend. Unfortunately, you weren’t born yet when I lived in South Bend, so congratulations on your kids, get them ready for Stanford. But I just wanted to ask you to reflect on the person we’ve lost this week, Colin Powell, you know as a soldier, you know as a public servant, can you just reflect for a moment on his life?

Pete Buttigieg: (06:38)
Yeah, you knew him as a colleague. I knew him as an example, somebody that so many looked up to as a thoughtful soldier, as a leader. And I think the biggest thing I’m thinking about as we mark his legacy, is not only the path breaking nature of, of his service, breaking barriers, just as you did in yours, but also the fact that he really transcended party. Of course, he served as an appointee in a Republican administration, but he was somebody who commanded respect among Democrats, independents and Republicans alike, and that’s a spirit that we need a lot more of in the times we’re living in.

Sara Haines: (07:17)
And going back to what we were discussing before, experts are warning that this supply shortage is going to get worse before it gets better, meaning we could see empty shelves, not only this holiday season, but possibly through next year’s holiday season. Businesses have already suffered so much during the pandemic, from shutdowns, to staff shortages, and now this. How can you reassure business owners and customers that things are actually turning around?

Pete Buttigieg: (07:41)
Well, what we’re seeing is that retail sales are through the roof, that’s part of why we have this challenge. But it is creating a lot of pressure on businesses, especially small businesses that can exactly charter their own ship or create their own supply chain, when they have a challenge. I’ll give you a example for my own extended family, my mother-in-law makes Christmas wreaths she’s going to spend most of this month in a family pole barn, making them. She got a big order for these big wreaths to decorate a small town in Michigan, but has a challenge because the metal rings that she ties the bows to, well, whenever she calls a vendor, they tell her it’s sitting on a ship in China. Now, she’s been able to find a way to kind of cobble together her own alternative, thanks to a another family member who’s got a welding shop, and I think a lot of Americans are finding ways to turn to each other, to source more of these things in America, which by the way, is something the President is calling for us to do across the board.

Pete Buttigieg: (08:37)
But in the meantime, you see that crunch, and that’s exactly why we’re doing the work we’re doing. Not just trying to pass this big infrastructure bill for the long run, but more immediate work, like working with the ports to get them open 24/7, which actually hadn’t been the norm until now. Working to make it easier for truck drivers to get commercial driver’s licenses, and cut out some of the red tape to get those goods flowing. All of those steps are going to make a difference, but again, the biggest difference of all, the thing that would really help with all of the disruptions, all of the shocks that we’re seeing is to put this pandemic behind us.

Whoopi Goldberg: (09:22)
Our thanks to Transportation Secretary, Pete Buttigieg