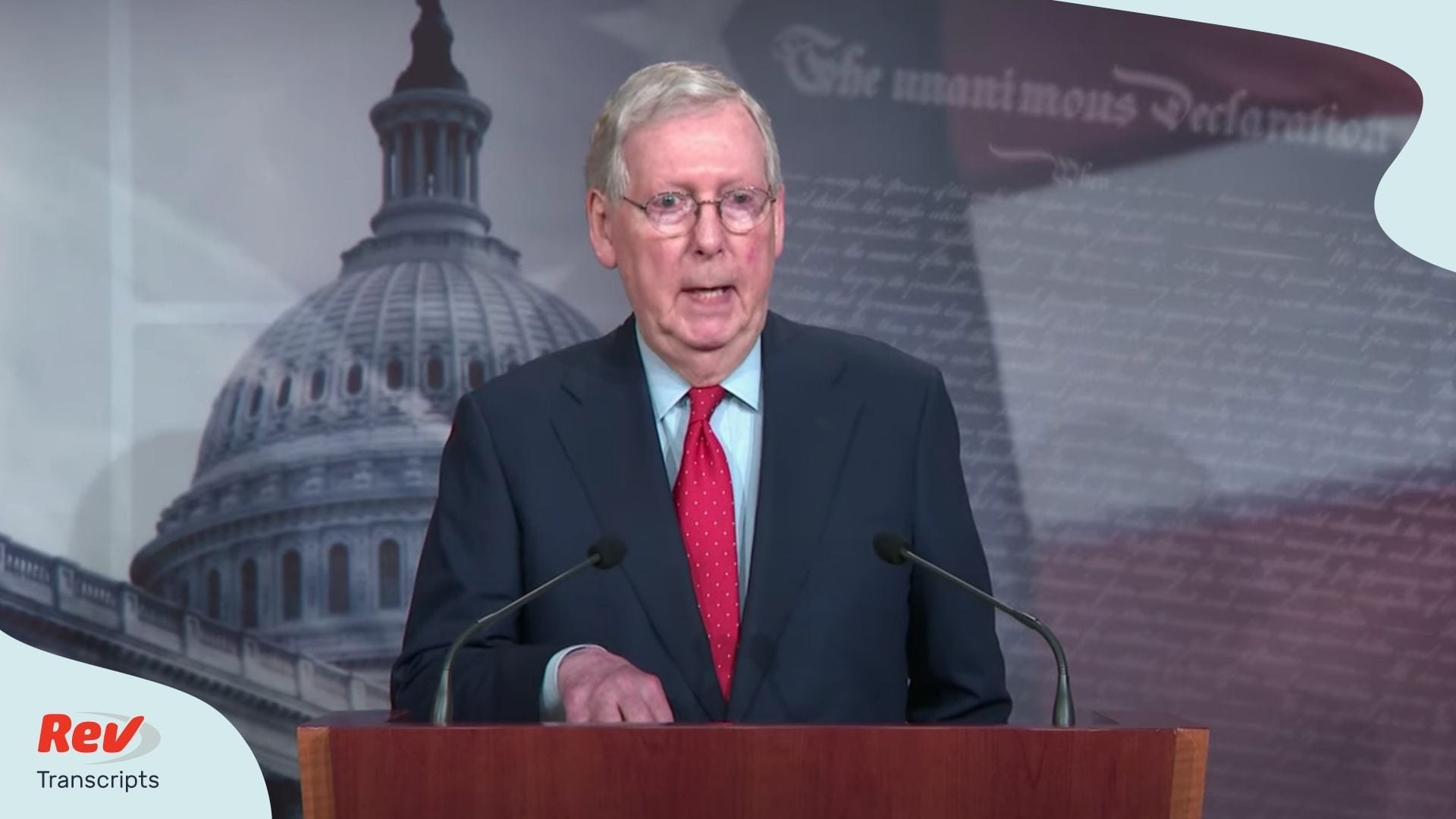 Mitch McConnell: (00:00)
Okay, good afternoon everyone. I wonder if you could sort of give you my thoughts as we went into the pandemic. My view was that we needed, obviously, to work together on a bipartisan basis, as close as we could, to try to develop a rescue package that would make sense for the country. We did that with a $2.2 trillion bill. I would remind everybody there had been two additional pandemic related bills before that, and we’ve allocated a stunning amount of money, $2.2 trillion, knowing full well that that probably wouldn’t be enough. It became clear 12 days ago that the small business program was out of money already. The demand was enormous. Senate Republicans and the administration felt that we ought to immediately plus that up. That was not acceptable to the Democrats.

Mitch McConnell: (01:16)
In the intervening time, it became clear that we needed additional funding for hospitals and for testing, and after one of these bipartisan agreements are always a lot of claims about who won and who lost. But I think the American people are the ones who won, and I think it’s also time to begin to think about the amount of debt that we’re adding to our country and the future impact of that. And I think we’ve also seen, with this catastrophic damage to the economy, that until we can begin to open up the economy we can’t spend enough money to solve the problem. And so, I want to congratulate the White House coronavirus task force, and the governors, for beginning to plan toward reopening the economy. Unless we do that, we can’t spend enough to solve the problem.

Mitch McConnell: (02:21)
In the hospital space, another sacrifice that was made by hospitals all across America, and particularly this was impactful in rural hospitals, and that was the decision recommended but implemented by the governors, that in addition to shutting down the economy, they would direct the hospitals not to do elective surgery. And what we learned during this process, obviously, was that’s the only place they make any money. And so, a lot of people’s health needs were being put aside and delayed as result of the directive not to do elective surgery.

Mitch McConnell: (03:01)
So, what I hope we’re going to see here in the next few days, and maybe within the next week for sure, is these beginning steps to open up the economy. A higher comfort level, I see all of you have your mask on, a higher comfort level to wear a mask in public, which Dr. Fauci and Dr. Birx have recommended and we’re certainly doing here in Washington when we go outside the building. A greater awareness of social distancing, but at the same time, a beginning to get back to normal. Because unless we get our economy up and running again, there’s not any way we can spend enough to continue to prop up the country.

Mitch McConnell: (03:45)
So, let me say I thought it was important, in this round four that we just passed in the Senate, that we delay the decision about whether to provide additional relief to state and local governments. Now, we know that they’re all suffering, we know that they’ve got revenue problems, but my view is we’ve gone so far on the national debt here that the next time we address this issue, the Senate should be back in session fully up and running with everybody involved in the discussion. So, I will predict that we will not try to pass another rescue package by consent.

Mitch McConnell: (04:35)
My view is we ought to bring everybody back, have full participation, begin to think about the implications to the country’s future for this level of national debt. Begin to see some evidence of the economy beginning to get back to normal, hopefully, in states that are less impacted. Beginning to see the hospitals beginning to improve their position by being able to engage in elective surgery again, and take measured steps as we go along. Measured steps, let’s see what we’re doing that is succeeding, what is not succeeding, what needs less and what needs more. Let’s weigh this very carefully, because the future of our country in terms of the amount of debt that we’re adding up is a matter of genuine concern.

Speaker 2: (05:29)
There’s a report by the Associated Press today that 300 billion of, or 300 million of the small business loans went to publicly traded companies. Was there enough done to prevent that kind of arguable abuse in this new package that just passed?

Mitch McConnell: (05:47)
Well, in terms of how the other money’s just spent, that’s a good question to ask the administration. I think we’re bound to learn as we move along here, the main purpose, obviously, of the small business program was small businesses. On the other hand, you can make an argument that if my job in lost, the size of my employer doesn’t make any difference to me. I’m out of work. So I mean, it’s an interesting debate. We’re feeling our way along here, trying to do the best we can to get money to our people and to our small businesses to get us through this period so that we can begin to get back to normal.

Mitch McConnell: (06:44)
Well, what I said, I’ll repeat what I said earlier. I think the next debate, which I assume will relate to state and local government relief, needs to be when the Senate is back in session with full participation. And in the meantime, also, take a look at how much debt we’ve racked up and not try to wave something through the Senate, of that consequence, without full participation.

Speaker 4: (07:14)
Earlier this morning, Attorney General Barr stated the Department of Justice would be willing to take action against the states, judicial action against States who after the coronavirus sort of decreased a little bit, who didn’t open up their shelter in place orders, the harsh restrictions. Should the DOJ be getting involved in states’ rights issues [crosstalk 00:07:38].

Speaker 5: (07:41)
Do you think it’s realistic that the PPP funds will run out again before the Senate is scheduled to return in May?

Mitch McConnell: (07:49)
I don’t know whether quick … Are you suggesting it will quickly run out of money again?

Mitch McConnell: (07:55)
Yeah, I think we don’t know. As I just said, I’ll repeat it again. I think let it be carefully calibrating as we move along here, what’s working, what isn’t, and be a little more cautious and make sure everybody’s here, the Senate and the House are back in session with full membership, before we address another phase.

Speaker 5: (08:23)
Just a follow up to that. I mean, what happens if the administration puts another request for emergency funds for PPP for hospitals? Will you call the Senate back prior to May fourth?

Mitch McConnell: (08:37)
Yeah. What we’re going to do is call the Senate back and have full membership here, and I’m sure the House will want to do the same thing, before we consider yet another rescue package. I mean, we’ve now allocated, I believe we’re about $2.7 trillion, a month ago. 500 billion more probably tomorrow. Let’s see how things are working. We’ve never been here before, this is totally uncharted territory, and we’re looking at how this is impacting on all of our country on a day to day basis.