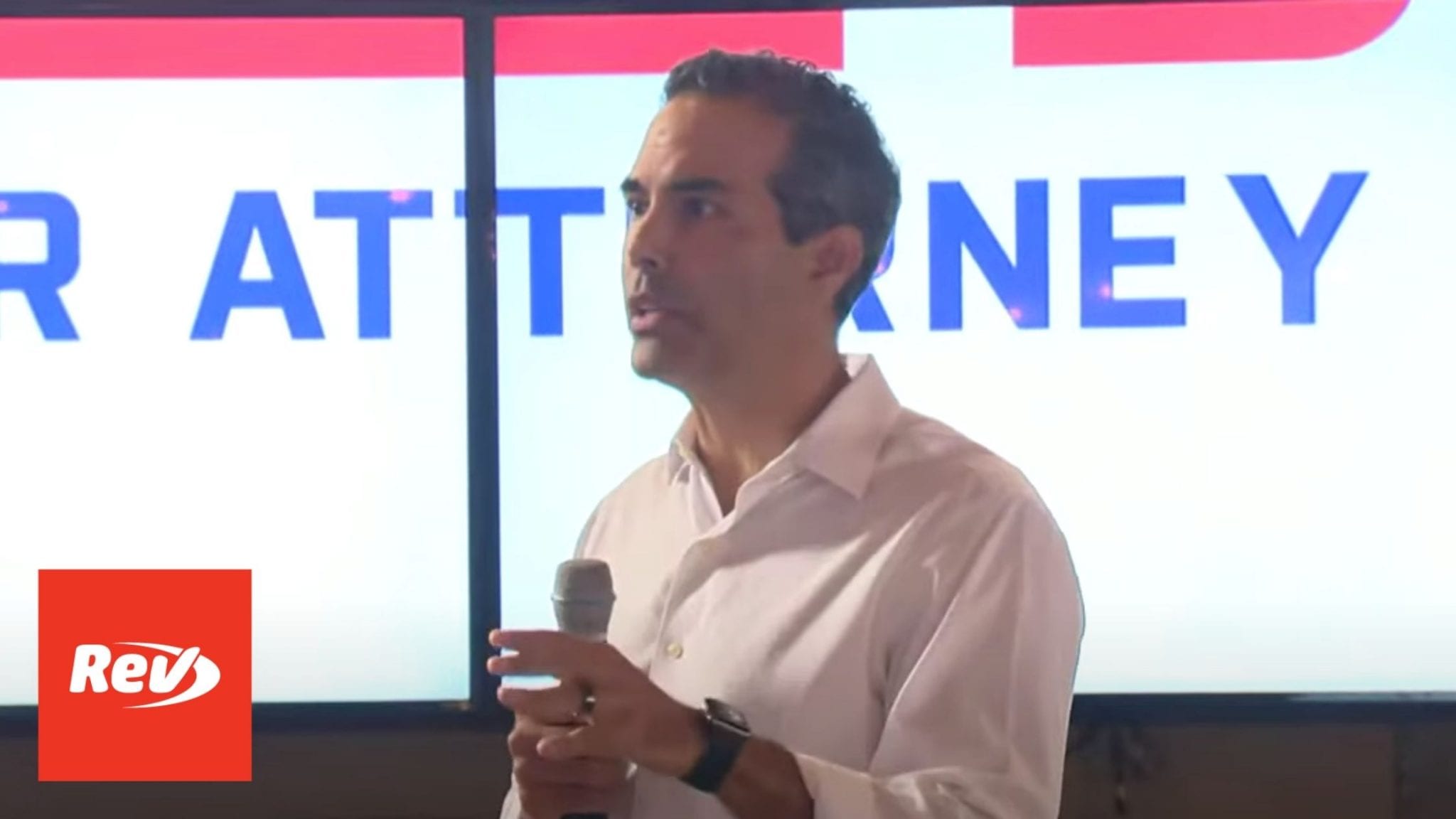 George P. Bush announced his campaign for Texas Attorney General on June 2, 2021. Read the transcript of his speech remarks here.

George P. Bush: (00:00)
Thank you. How we doing, Texas? It’s been a rough year on a lot of us, but few industries have had it worse than Texas bars and restaurants, so tonight I am proud to be here with you at Buford’s having a drink and reminding ourselves that Texas is back in business.

George P. Bush: (00:36)
Many of you have traveled far distances, many of you have been with me from the beginning, and we started this journey six years ago, and I will never forget it. When we got to work, we talked about how we are the Lone Star State, we are an exceptional state. The reason is because we believe you can go as far and as fast as your dreams can take you. We believe that government should work for you, not against you. We went to work on day one and the results speak for themselves. This has been the most successful, this has been the most conservative time in the storied past of the General Land Office.

George P. Bush: (01:12)
Let me tell you why. We let go of 20% of the workforce, asking more with less. To demand more of our government, saving the taxpayer millions of dollars. With the Permanent School Fund, we brought oil and gas leases online generating hundreds of millions more for public schools in Texas. I championed conservative ideas in the classroom like school choice. Yes, I [crosstalk 00:01:37] … We got school choice right here. Yes, I sued the Obama administration and won. We’ve got some Hook ’em Horns here. Got some Aggies, too. When the federal government tried to take private and public lands, we sent the message back to Washington, D.C., “Don’t mess with Texas.”

George P. Bush: (02:03)
But these aren’t just conservative ideas. I think they bring us together as Texans and that’s what brings us together tonight. When I came to the office, I try to follow the example of Abraham Lincoln, our greatest Republican, trying to bring honor, character, integrity to the workforce. Because at the core of our movement, it’s about doing the right thing, but most importantly, it’s about doing the right thing when no one is watching.

George P. Bush: (02:28)
President Trump was absolutely right when he said, “Drain the swamp.” Does anybody remember that? Because we had way too much corruption in Washington, D.C. Where else can somebody like Hunter Biden get fabulously wealthy and jeopardize national security at the same time? But we’ve got our own problems in Austin. We have a web of corruption and lies that affect one of the highest offices in our land-

George P. Bush: (02:59)
Elections are about choices. In 1976, Ronald Reagan ran against Gerald Ford, a total outsider against a sitting incumbent president. Why? Because he felt that conservatives needed to have a choice in the Republican party when a scandal was plaguing the highest office in the land. But in our times here in Texas, we have a scandal that’s plaguing one of our highest offices, and I believe conservatives should have a choice in the Republican primary.

George P. Bush: (03:33)
For generation, we’ve been known as the law and order party and rightfully so. We backed the thin blue line because we don’t want to see rioting and lawlessness in our streets. But with that comes a responsibility to hold those accountable that are entrusted with enforcing our laws. That’s why we confronted Bill Clinton in the ’90s. Not necessarily because of his personal behavior. As bad as that was, we did so because he abused the office, he breached the vow to the constitution, to the laws of the state, and to our country, and then lied about it under oath.

George P. Bush: (04:04)
But as conservatives, we can’t look the other way when one of our own does the same thing-

George P. Bush: (04:09)
… over and over again. We need more elected officials that uphold the law rather than find exceptions to it, and that’s why tonight in front of so many friends and supporters, I am proud to announce I am a Republican candidate to be the next Texas Attorney General. Got some banners up there. We’re missing a banner right there. There you go.

George P. Bush: (04:54)
I do so because enough is enough, Ken. You brought way too much scandal and too little integrity to this office. As a career politician for 20 years, it’s time for you to go.

George P. Bush: (05:31)
But I want to be clear, I’m not running against one man. I’m running for a set of ideas, ideas that bring us together tonight. Ideas like a government happy to give you anything you want is probably a government more than happy to take away everything you have. That it’s okay to live out our faith in the public square, that we shouldn’t apologize for the exceptionalism of our country and that woke culture and critical race theory is damaging future generations, and we won’t take it.

George P. Bush: (05:57)
But the left, the modern day left, have a completely different viewpoint, but let’s give them credit. They’ve been totally honest about where they would take our country. They said that they would try to pass the Green New Deal, which would cut off hundreds of thousands of jobs in the oil and gas industry. Hardworking people have been laid off because of this president. We’ve seen an open borders policies that’s resulted in the largest surge of illegal immigration on our southern border in modern American history with no end in sight, no sense of urgency, and no leadership from Washington D.C. We’ve seen as spending plan now presenting 6 trillion in new spending and trillions more in taxation, piling up a mountain of debt that our children and our grandchildren can never hope to repay.

George P. Bush: (06:44)
But as Republicans, we don’t have to sit back and take it. If we put the right team on the field, I guarantee you, we will take back our country in November 2022.

George P. Bush: (07:00)
I want you to know as attorney general, I would first work to secure the border. In fact, tomorrow I will be going to the Rio Grande Valley, the most highly trafficked area in the entire southern border. I will honor our border patrol officials. I will hold deadbeat bureaucrats and D.C. politicians accountable in the courthouse. I will work to get the politicians in D.C. to do their job.

George P. Bush: (07:25)
Second, I will restore accountability to this office, just like I did at the Land Office, getting rid of wasteful spending, zero-based budgeting, restoring morale to the state’s most important law firm.

George P. Bush: (07:36)
Third, I will confront the human traffickers. This is one of the fastest growing crimes in the state of Texas, and we are not doing enough. Just like I did during the legislative session, I will stand shoulder to shoulder with human trafficking survivors and tell their stories of trauma and abuse. As the lead prosecutor for the state, my message to the Johns, the pimps, and the perps, “Your days are over. I’m coming after you.”

George P. Bush: (08:05)
Finally, I won’t apologize for backing the thin blue line in Texas. Law enforcement is under assault. Even in our own legislature, we saw 200 bills seeking to strip their authority, making their jobs harder and separating us from the anarchy and the chaos in the streets. As attorney generals, I will confront cities like Austin that defunded the police, and I will work on legislation that defund cities that defund the police in Texas.

George P. Bush: (08:39)
One final thing I want to share with my fellow Republicans tonight, the Democrats are all in on this race. They see that Ken Paxton is our weak link. They know that he was the lowest vote getter statewide in the last election cycle, and they know that if he is our nominee once again, they have their first statewide elective office in close to 30 years. You and I have worked way too hard over these past few years to allow that to happen. The consequences would be too great for the state and for this country.

George P. Bush: (09:07)
So, I just want you to know that I’m not afraid of this fight, I welcome it. All throughout my life, I’ve been willing to chart a different course, take a different path. If I felt it was the right thing to do, whether it was teaching in a tough school after college, joining the military, serving in Afghanistan as part of operation Enduring Freedom, or becoming the only member of the Bush family to endorse Donald J. Trump for President of the United States.

George P. Bush: (09:37)
I’m willing to hold that line. I’m willing to chart that different course. I’m willing to fight for Texas values, and I want to defend the constitution. Our first amendment right to live out our faith in the public square, and yes, have a conservative conversation online and on a college campus, our second amendment right to own and to bear arms. I will protect the integrity of our election systems with voter ID and eliminating ballot harvesting in Texas. Most importantly, I will protect the rights of the unborn. I will work to defund Planned Parenthood and I will seek to end the tragedy of abortion in our times.

George P. Bush: (10:18)
Ladies and gentlemen, that’s our mission. This is our moment. When you and I work together, we make great things happen and we will restore honor and integrity to the Texas Attorney General’s office. May God bless each and every one of you and may God bless the great state of Texas.