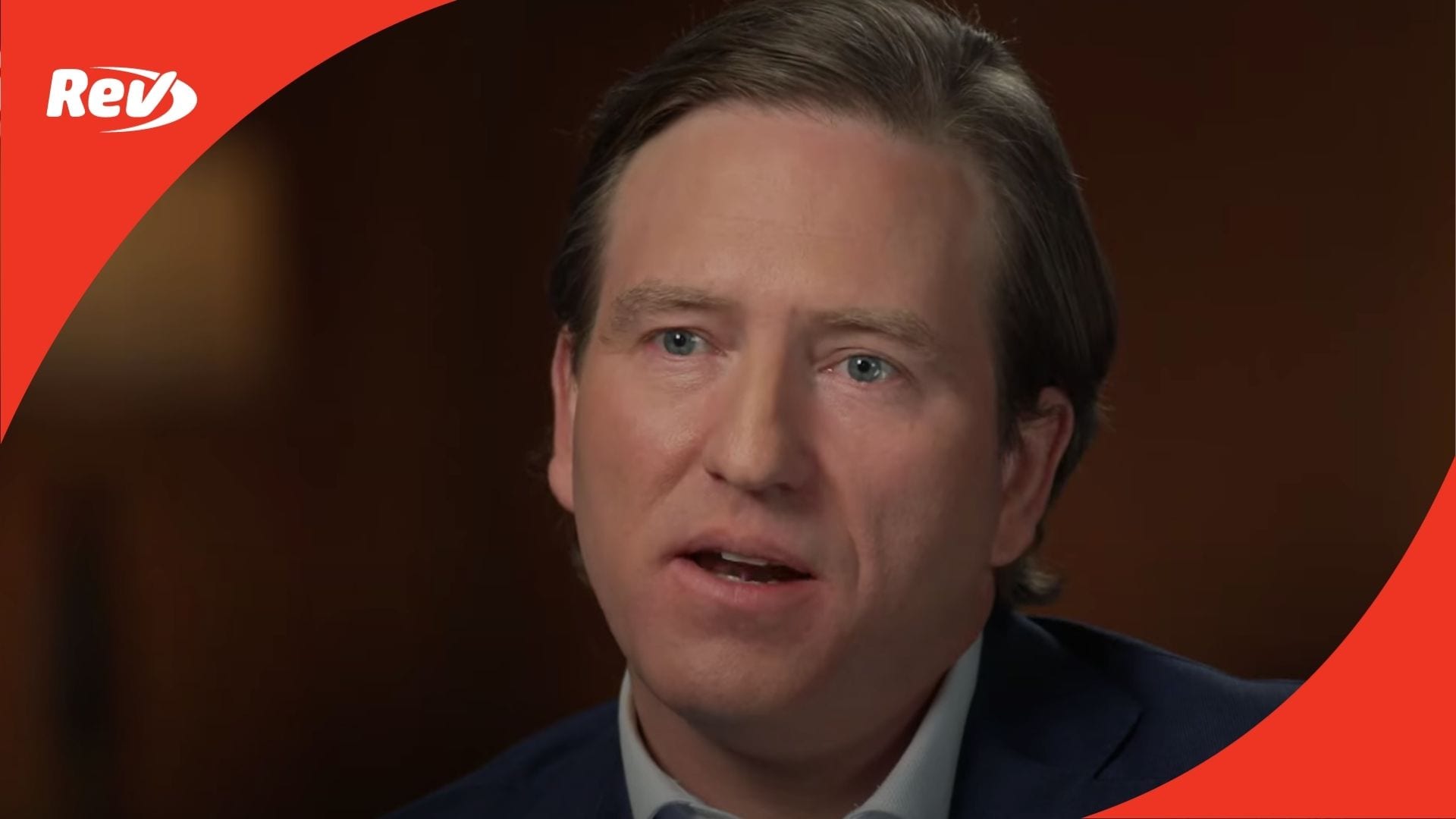 Former United States Director of the Cybersecurity and Infrastructure Security Agency Chris Krebs did an interview with 60 Minutes on November 29. Krebs was fired by President Donald Trump after saying the U.S. had the most secure election in American history. Read the interview transcript here.

Scott Pelley: (01:23)
Two years ago, President Trump put Christopher Krebs in charge of the new Cybersecurity and Infrastructure Security Agency. Krebs, a lifelong Republican, was confirmed unanimously by the Senate. His agency, known by its acronym CISA, helped secure computer systems anywhere that a security breach could be catastrophic, nuclear power plants, for example, and the election hardware in all 50 States. Why are you speaking to us?

Christopher Krebs: (01:56)
I’m not a public servant anymore, but I feel I’ve still got some public service left in me. And it’s hard once you take that oath to uphold and defend the Constitution from threats foreign and domestic. It’s hard to walk away from that. And if I can reinforce or confirm for one person that the vote was secure, that the election was secure, then I feel like I’ve done my job.

Scott Pelley: (02:25)
Krebs, who’s 43, worked on cyber security in the Bush administration, became director of cybersecurity policy at Microsoft, and joined the Trump Department of Homeland Security in 2017. His priority was to stop anyone from repeating Russia’s 2016 election hacking and disinformation.

Christopher Krebs: (02:46)
So we spent something on the order of three and a half years of gaming out every possible scenario for how a foreign actor could with an election. Countless, countless scenarios.

Christopher Krebs: (03:16)
Paper ballots. Paper ballots give you the ability to audit, to go back and check the tape and make sure that you got the count right, and that’s really one of the keys to success for a secure 2020 election. 95% of the ballots cast in the 2020 election had a paper record associated with it, compared to 2016, about 82%.

Scott Pelley: (03:41)
And with a paper record, you can go back and verify what the machine is saying by physically counting the paper.

Christopher Krebs: (03:48)
That gives you the ability to prove that there was no malicious algorithm or hacked software that adjusted the tally of the vote. And just look at what happened in Georgia. Georgia has machines that tabulate the vote. They then held a hand recount, and the outcome was consistent with the machine vote.

Christopher Krebs: (04:14)
That tells you that there was no manipulation of the vote on the machine count side. And so that, pretty thoroughly in my opinion, debunks some of these sensational claims out there that I’ve called nonsense and a hoax, that there is some hacking of these election vendors and their software and their systems across the country. It’s nonsense.

Scott Pelley: (04:42)
Before the election, as the president called mail-in ballots a fraud, Krebs’ team released a report highlighting the safeguards built into mail-in voting. His agency knocked down rumors and exposed an Iranian plot to intimidate voters. On Election Day, Krebs assembled a team in his command center to defend the vote.

Christopher Krebs: (05:44)
It was quiet, and there was no indication or evidence that there was any sort of hacking or compromise of election systems on, before, or after November 3rd.

Scott Pelley: (06:06)
Nine days after Election Day, Mr. Trump tweeted falsely that machines from Dominion Voting Systems deleted millions of votes. Krebs couldn’t remain silent. His agency and its selection security partners answered with a public statement. To quote from the November 12th statement that CISA and its partners put out, “The November 3rd election was the most secure in American history. There is no evidence that any voting system deleted or lost votes, or changed votes, or was in any way compromised.”

Scott Pelley: (06:44)
The president tweeted after that statement, quote, “The recent statement by Chris Krebs on the security of the 2020 election was highly inaccurate, in that there were massive improprieties and fraud.” Do you remember what the president said at the end of that tweet?

Christopher Krebs: (07:13)
I don’t know if I was necessarily surprised. It’s not how I wanted to go out. The thing that upsets me the most about that is that I didn’t get a chance to say goodbye to my team, and I’d worked with them for three and a half years in the trenches, building an agency, putting CISA on the national stage. And I loved that team, and I didn’t get a chance to say goodbye. So that’s what I’m most upset about.

Scott Pelley: (07:47)
Since he was fired, about a dozen Republican senators have vouched for Krebs’ work. The president’s essentially saying in that tweet that you did a lousy job, that you and your team blew it, and allowed massive fraud all across the country.

Scott Pelley: (08:09)
Still, the president’s lawyers have filed at least a dozen suits and spun conjecture without evidence.

Rudy Giuliani: (08:16)
And you should be more astounded by the fact that our votes are counted in Germany and in Spain.

Scott Pelley: (08:23)
As you watched Rudy Giuliani’s news conference at the Republican National Committee headquarters, what were you thinking?

Christopher Krebs: (08:31)
It was upsetting, because what I saw was a apparent attempt to undermine confidence in the election, to confuse people, to scare people. It’s not me. It’s not just CISA. It’s the tens of thousands of election workers out there that had been working nonstop 18-hour days for months. They’re getting death threats for trying to carry out one of our core democratic institutions, an election. And that was, again to me, a press conference that I just… It didn’t make sense. What it was actively doing was undermining democracy. That’s dangerous.

Scott Pelley: (09:15)
Let me ask for your reaction to some of the vote fraud that the president and his team have been alleging, votes tabulated in foreign countries.

Christopher Krebs: (09:43)
So again, there’s no evidence that any machine, that I’m aware of, has been manipulated by a foreign power, period.

Scott Pelley: (09:54)
Communist money from China and Cuba used to influence the election.

Christopher Krebs: (09:59)
Look, I think we can go on and on with all the farcical claims alleging interference in the 2020 election, but the proof is in the ballots. The recounts are consistent with the initial count, and to me, that’s further evidence, that’s confirmation, that the systems used in the 2020 election performed as expected and the American people should have 100% confidence in their vote.

Scott Pelley: (10:29)
In a news conference, a lawyer who was representing the president at the time, Sidney Powell, said specifically that the dominion companies voting machines, quote-

Sidney Powell: (10:41)
It can set and run an algorithm that probably ran all over the country to take a certain percentage of votes from President Trump and flip them to President Biden.

Christopher Krebs: (10:51)
Votes were cast in Georgia, for instance, again, on paper. They were counted by a machine. They were subsequently recounted by hand. The outcomes of that count were consistent. If there was an algorithm that was flipping votes or changing votes, it didn’t work. I think the more likely explanation though is that there was no algorithm, that the systems performed as intended, that the series of security controls before, during, and after an election protected those systems from any sort of misbehavior.

Scott Pelley: (11:31)
Most elections are run by each state’s secretary of state, but not one of them, Democrat or Republican, has reported ballot rigging that would change the election. Some are paying a price for integrity.

Christopher Krebs: (11:46)
And it’s, in my view, a travesty what’s happening right now with all these deaths to election officials, to secretaries of state. I want everybody to look at Secretary Boockvar in Pennsylvania, Secretary Benson in Michigan, Secretary Cegavske in Nevada, Secretary Hobbs in Arizona. All strong women that are standing up, that are under attack from all sides, and they’re defending democracy. They’re doing their jobs. Look at Secretary Raffensperger in Georgia, lifelong Republican. He put country before party in his holding a free and fair election in that state. There are some real heroes out there. There’s some real patriots.

Scott Pelley: (12:31)
At the Capitol, the stage is going up for Inauguration Day, January 20th. Well before that on December 14th, the presidential electors will cast their ballots, which should settle the election. Christopher Krebs told us it’s ironic that the disruption and disinformation he feared from abroad came instead from Pennsylvania Avenue. The president says you’re dead wrong about election security. And to him, you say what?