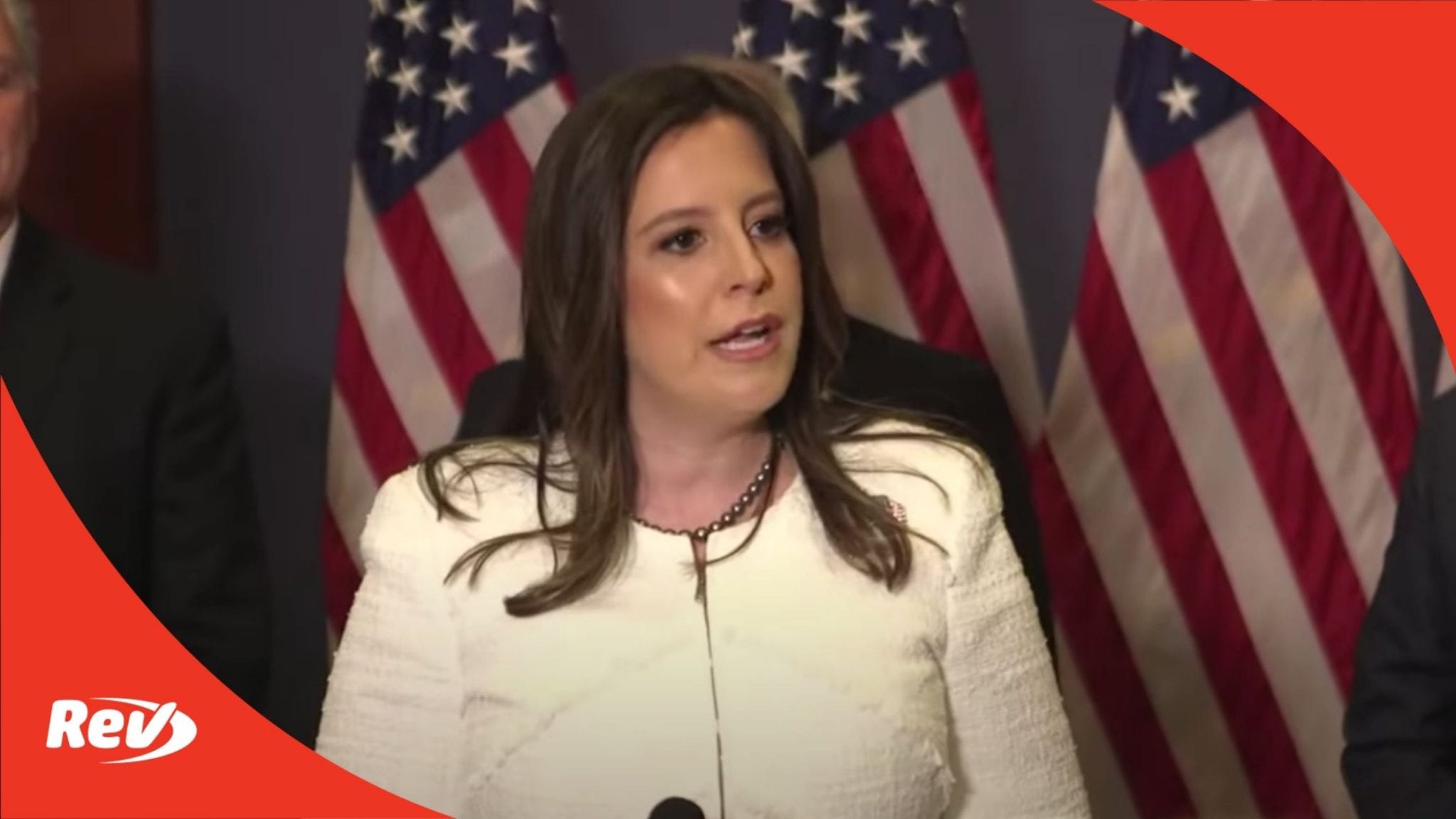 Kevin McCarthy: (00:40)
The gas price has not been this high nationally since the last time Joe Biden was in the White House. We got the arrests along the border the highest its been in almost two months, more than 170,000. It’s a health crisis. It’s a security crisis where we’re catching people who are on the terrorist watch list. Inflation is a tax on every single American. This is not where we were 18 months ago. It’s where we were when Jimmy Carter was president. We got people giving incentives not to go to work when we have more than eight million jobs out there that need to be filled.

Kevin McCarthy: (01:24)
We’ve got children still out of school, millions of them. We’ve got a Congress run by the Democrats that pay you even if you don’t show up for work. We believe in putting the American people first. Our focus is back to work, back to school, back to health and back to normal. We’re thankful for operation warp speed, but just yesterday, CDC say, do not have to wear a mask if you’re vaccinated. I believe in the vaccine. I believe in the ingenuity of America. I also believe we shouldn’t give that away for free. So with that, I want to call up our whip, Steve Scalise.

Steve Scalise: (02:09)
Kevin, I also want to congratulate our new conference chair, Elise Stefanik. Congratulations. You’re going to do a great job. Our conference is incredible unified right now, but we’re also very concerned because America is experiencing numerous crises. All across the board, you’re seeing President Biden fail to lead this nation through some unprecedented serious problems that are affecting everyday hard working families. It’s not just in America, by the way, that we’re seeing crises. Across the globe, you see right now, thousands of rockets going off in the Middle East.

Steve Scalise: (02:47)
Israel is under attack. Where’s President Biden’s leadership? He spent more time negotiating to help Iran get towards a nuclear weapon than to confront the problems of Hamas and Palestinians attacking Israel. You’re seeing Russia continue to be on the move. In fact, not only is Russia on the move in Eastern Europe, Russia is attacking America’s pipelines. And what is President Biden doing? He’s making it easier for Russia to send us gasoline, to be more reliant on Russia and Middle Eastern oil, because he shut off the spickets. It’s not only the Keystone Pipeline that he shut down.

Steve Scalise: (03:24)
He’s also canceled leases and permits on drilling and federal lands, making Americans less energy secure, and that means families are paying more money at the pump. When you see lines at the pump, that’s something people haven’t seen like our leader said since the 1970s. This is because of President Biden’s failed leadership. Where is he on these problems? Why has not President Biden nor Vice President Harris gone to the border? The border crisis has been created by President Biden’s failed policies.

Steve Scalise: (03:55)
We had a secure border when he took the oath of office and then he quickly unraveled all of those agreements, including really good negotiated agreements with Mexico, with the Northern Triangle countries that President Biden undid creating a border crisis and then he wants to blame it on other people. There used to be a marker on the president’s desk that said the buck stops here. President Biden continues to ignore the problems, hoping that they’ll go away while he creates even more prices. Inflation is real.

Steve Scalise: (04:26)
Average homeowner right now, if they’re trying to buy a new house, it’s going to cost $36,000 more because of the skyrocketing costs for things like lumber. And what’s president Biden’s answer? To pay people not to work. There’s over eight million job openings in America right now. And every small business owner can’t find workers because President Biden insisted that he pays people not to work. Estimates are there’s hundreds of billions of dollars in waste and fraud in that program that he created, and he refuses to confront these problems. These are problems that we’re going to confront as House Republicans.

Steve Scalise: (04:58)
House Republicans are very unified in confronting the challenges facing this country. We’re going to work on those problems every single day and an even more united way. That’s why we’re proud of that Elise got elected today. Now I want to bring up our conference vice-chair, also from the state of Louisiana, Mike Johnson.

Mike Johnson: (05:18)
Thanks, Steve. And on behalf of the conference, I’m delighted to be the first, I think, to publicly, at least in a broad setting, congratulate Elise Stefanik on her election as our newest Republican conference chair. This is a critical season for us and important time for the country as has been said. All these great challenges that have just been articulated here and that all the American people know we have an important job to do. Elise did a great job over the last several days, extraordinary job, reaching out to every member of the conference, presenting a vision for unified leadership.

Mike Johnson: (05:47)
She committed to work with everyone from all across the country and our conference with all their talent and perspectives to bring to bear for this important task ahead of us. So we are excited, as Steve said, we are unified. There is a great feeling coming out of that auditorium today, and we are ready to face this challenge to present this vision, to get our message to the American people and to take back the House in 2022. So without further ado, let me just introduce you to our new Republican conference chair, Elise Stefanik of New York.

Elise Stefanik: (06:16)
Thanks, Mike. Well, first I wanted to thank my colleagues for the opportunity to serve as the House Republican Conference Chair. I have prioritized listening to all members of our Republican Conference and my focus is on unity because that’s what the American people and that’s what our voters deserve. I also want to thank this leadership team. I look forward to working with them in partnership shoulder to shoulder to make sure that we are fighting on behalf of hardworking Americans. I also want to thank President Trump for his support. He is a critical part of our Republican team.

Elise Stefanik: (06:50)
And of course, most importantly, I want to thank the voters of New York’s 21st Congressional District, whom I’m honored to represent each and every day and fight for them. The American people are suffering under the far left radical socialist policies of President Joe Biden and Speaker Nancy Pelosi. In just over 100 days, we have an economic crisis, we have a border crisis and we have a national security crisis. The economic crisis, we see the worst jobs report in over 20 years. Unemployment is up, small businesses are struggling to hire workers and Speaker Pelosi and Joe Biden’s solution to that is to pay people to stay out of work rather than incentivizing people to get back to work.

Elise Stefanik: (07:35)
As Republicans, we are fighting to reopen the economy, to create jobs. We are fighting against the trillions of dollars of tax increases and the trillions of dollars of reckless spending. The border crisis, this is not only a national security and Homeland security crisis, this is a humanitarian crisis. We see historic concerning numbers when it comes to human trafficking on the border, when it comes to drug trafficking on the border. Every single state in this nation is a border state and feels that impact. At home in my district, the Northern border is being impacted because border patrol officers are being transferred from the Northern border to the Southern border.

Elise Stefanik: (08:13)
Republicans stand for border security. And of course the national security crisis, we are seeing our strongest ally Israel under attack. And we have seen Joe Biden and Nancy Pelosi not step up to stand by and support Israel and prioritize outreach to adversaries like China and Iran. So I’m very excited for this opportunity. We are unified working as one team and the American people know that the stakes are incredibly high. We are going to fight for them each and every day against the destructive radical far left socialist agenda of President Joe Biden and Nancy Pelosi that’s destroying America.

Elise Stefanik: (08:52)
And I’ll go to the first question from the New York Post, Julie.

Julie: (08:56)
So you kind of came under fire from some conservatives that are concerned about your record. Are you concerned about, I mean, I know unifying your message, but even those criticisms, going to Europe, the vote, I guess, how do you kind of overcome that?

Scott: (09:41)
Is President Trump the leader of the Republican Party.

Speaker 6: (09:58)
How can you be unified so long as you have some members who support the former president and some who don’t?

Elise Stefanik: (10:04)
We are unified and I look to the voters across America. Republican voters are unified in their support and their desire to work with President Trump and we are unified as Republicans. As I said, this is the slimmest majority that Nancy Pelosi has in a generation. We picked up a number of seats, defied expectations. We’re going on offense and we’re going to win on the issues because people are understanding that Joe Biden’s pledge of bipartisanship, he has broken that pledge since his first day in office. There has been no bipartisan outreach.

Speaker 8: (10:50)
Upon hearing that Chip Roy was getting in the race, President Trump put out a statement last night suggesting that he should be challenged. Do you agree with that?

Elise Stefanik: (10:58)
Listen, competition is good in America. We are the United States of America. We should have a discussion of ideas. I welcome the competition. I’m honored for the support. We are working as one team. My job as House Republican Conference Chair, we are focused on putting forth policies and communicating them to the American people to beat Democrats, and we are going to win the majority in 2022 as one team.

Speaker 9: (11:20)
Is there a place in the party for vocal Trump critics like Liz Cheney, like Adam Kinzinger?

Kevin McCarthy: (11:52)
One last thing. I want to wish our policy chair right here happy birthday. Gary Palmer, it’s his birthday today. And so do you all remember the birthday song? Here we go. [singing] All right. Everybody have a good weekend.