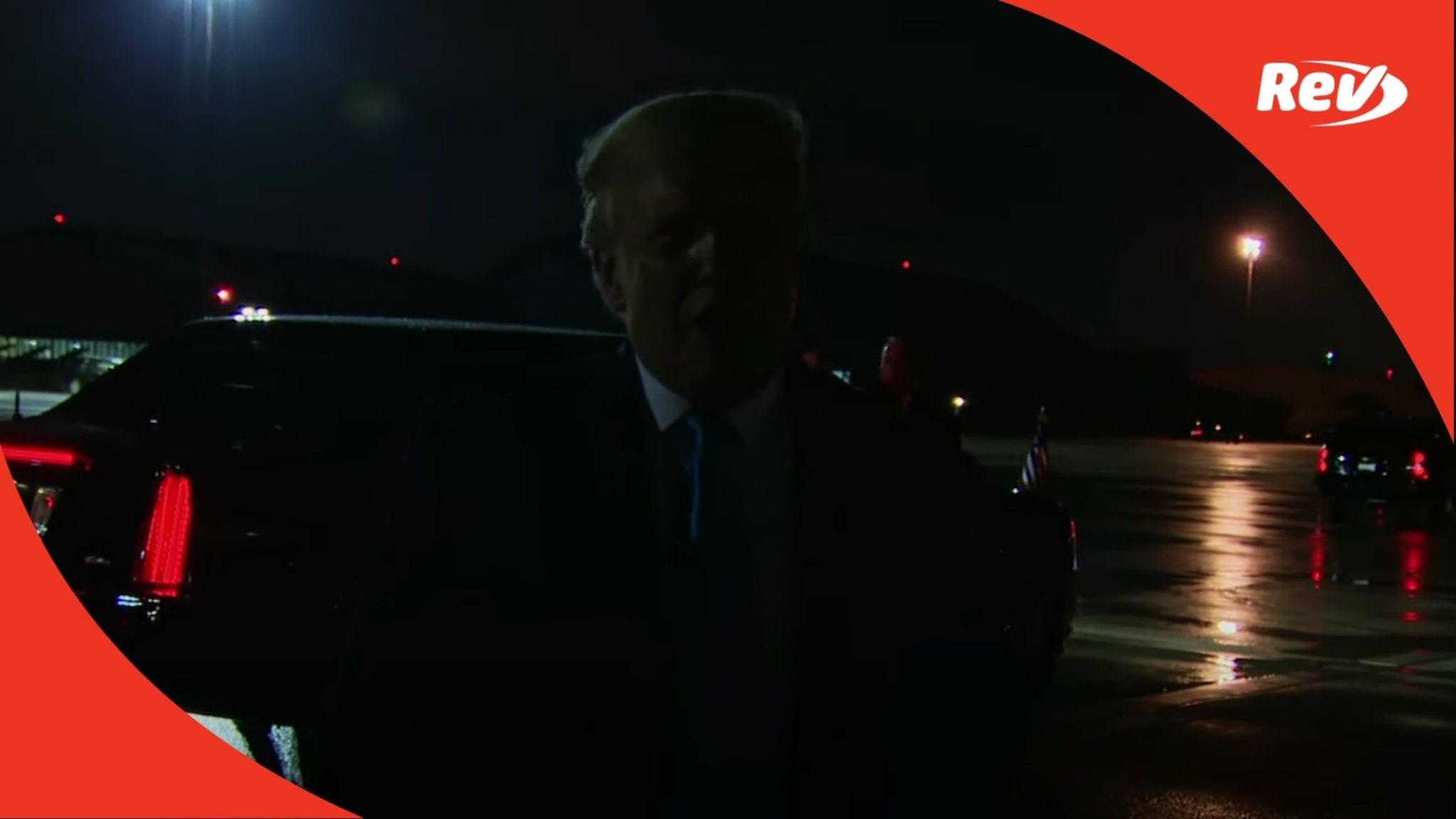 Late Thursday night on his way back from a rally, Donald Trump addressed a recent report by The Atlantic that Trump called U.S. military service members “losers” and “suckers.” Read the full transcript of his remarks here.

Donald Trump: (00:39)
Thank you very much. We had a very successful day. Pennsylvania was incredible. The crowd was incredible. You saw what was unable to get in. We had thousands of people unable to get in. And I appreciate everybody being there. That was really a terrific moment, I think, coming off the plane. It doesn’t get any bigger than that. I did hear though, when reentering the plane, I was told by Mark and Hope and some others that some horrible things were said. Fake things. Fake news. Corrupt news. The kind of news that’s ruining your profession. And everyone knows it’s totally false. General Keith Kellogg, who’s a highly respected man, couldn’t believe when he heard it. And he knows everything about all of it. And to think that I would make statements negative to our military and our fallen heroes when nobody’s done what I’ve done with the budgets, with the military budgets, with getting pay raises for our military. It is a disgraceful situation by a magazine that’s a terrible magazine. I don’t read it, but I just heard about it.

Donald Trump: (01:48)
They made it up, and probably it’s a couple of people that have been failures in the administration that I got rid of, and I couldn’t get rid of them fast enough. Or it was just made up. But it’s unthinkable. As far as John McCain is concerned, I was never a fan. I will admit that openly. I disagreed with him on the endless wars. I disagreed with him with respect to the vets and the taking care of the VA. I wanted to do it a much different way, and I think it’s proven to be a much more successful way when you look at the success we’ve had with the VA and with our vets with choice and with accountability, all the things I’ve got. So I disagreed with John McCain, but I still respected him. And I had to approve his funeral as president. We lowered the flags. I had to approve that. Nobody else. I had to approve it.

Donald Trump: (02:38)
When you think, and I’m just thinking back, I had to approve either Air Force One or a military plane to go to Arizona to pick up his casket. I approved it immediately. I had to approve the funeral because he had a first-class AAA funeral that lasted for nine days, by the way. I had to approve it. All of that had to be approved by the president. I approved it without hesitation, without complaint. And I felt he deserved it. I disagreed with him on things, and he was a tough guy, but I felt he deserved it. For somebody to say the things that they say I said is a total lie. It’s fake news. It’s a disgrace. And frankly, it’s a disgrace to your profession. Now, with all of that being said, you’ll speak to Keith Kellogg. You’ll speak to other people, because many people knew.

Donald Trump: (03:34)
Let me just go into the trip to Europe and to France. I was ready to go to a ceremony. I had two of them, one the following day. It was pouring. I went to that. But the helicopter could not fly. The reason it couldn’t fly, because it was ranting about as hard as I’ve ever seen. And on top of that, it was very, very foggy, and the helicopter was unable to fly. It was a fairly long helicopter flight, but it was a very long drive. In order for me to go, we would have had to leave immediately and go through very busy areas of, I guess, Paris, but a very, very heavily traveled area, a big city. I think it was Paris. The Secret Service told me, “You can’t do it.” I said, “I have to do it. I want to be there.” They said, “You can’t do it. We’ll get you confirmation of this. For you to do that, make that trip not by helicopter flying over everything, we have to work with the police. We have to work with everything.”

Donald Trump: (04:39)
And I think you’ll find on record in the police force in the areas that we’re talking about, areas of Paris that we’re talking about, I think you’ll find on record requests, and we actually have Secret Service that I’m going to ask to give you details. They said, “You can’t do it.” It was two and a half hours or two hours of driving. It was a long drive. They said, “You can’t do it.” So I said, “No, I want to do it.” They said, “You can’t.” There was no way I would’ve been able to do it. And they would never have been able to get the police and everybody else in line to have a president go through a very crowded, very congested area. So I went and I called home. I spoke to my wife. I said, “I hate this. I came here to go to that ceremony,” and to the one that was the following day, which I did go to. I said, “I feel terribly.” And that was the end of it.

Donald Trump: (05:34)
Now, all of a sudden, somebody makes up this horrible story that I didn’t want to go. And then they make up an even worse story, an even worse story calling certain names to our fallen heroes. It’s a disgrace that a magazine is able to write it. If they really exist, if people really exist that would have said that they’re low lives and they’re liars. And I would be willing to swear on anything that I never said that about our fallen heroes. There is nobody that respects them more. So I just think it’s a horrible, horrible thing. We made a great evening into, frankly, a very sad evening when I see a statement like that. No animal, nobody, what animal would say such a thing? And especially since I’ve done more, I think, than almost anybody to help our military, to get the budgets of our military, to get the pay raises for our military.

Donald Trump: (06:34)
I just think it’s a horrible thing that they’re allowed to write that. We can refute it. We have other people that will refute it. The one I would like you to speak to is General Keith Kellogg, because he knows exactly the story, but you can also speak to Secret Service. They wouldn’t let me go, no matter what happened, because of security, because of safety.

Donald Trump: (06:54)
I want to thank you for being here. There’s nothing much more that I could say. All they’re trying to do is influence a presidential election where we’ve gone very high in the polls in the last short period of time, where we’re doing very well, where we’re going to win, and they’re going crazy. The magazine in question is a never Trumper magazine, probably doing badly. I know nothing about it. I don’t read it. I just heard about it now, about this story. But it’s a total never Trumper magazine, and other people that are trying to influence the outcome of a presidential election. And you know what? People are to smart for it. And somebody has to make a stand. This fake press is a disgrace. Thank you very much, everybody.