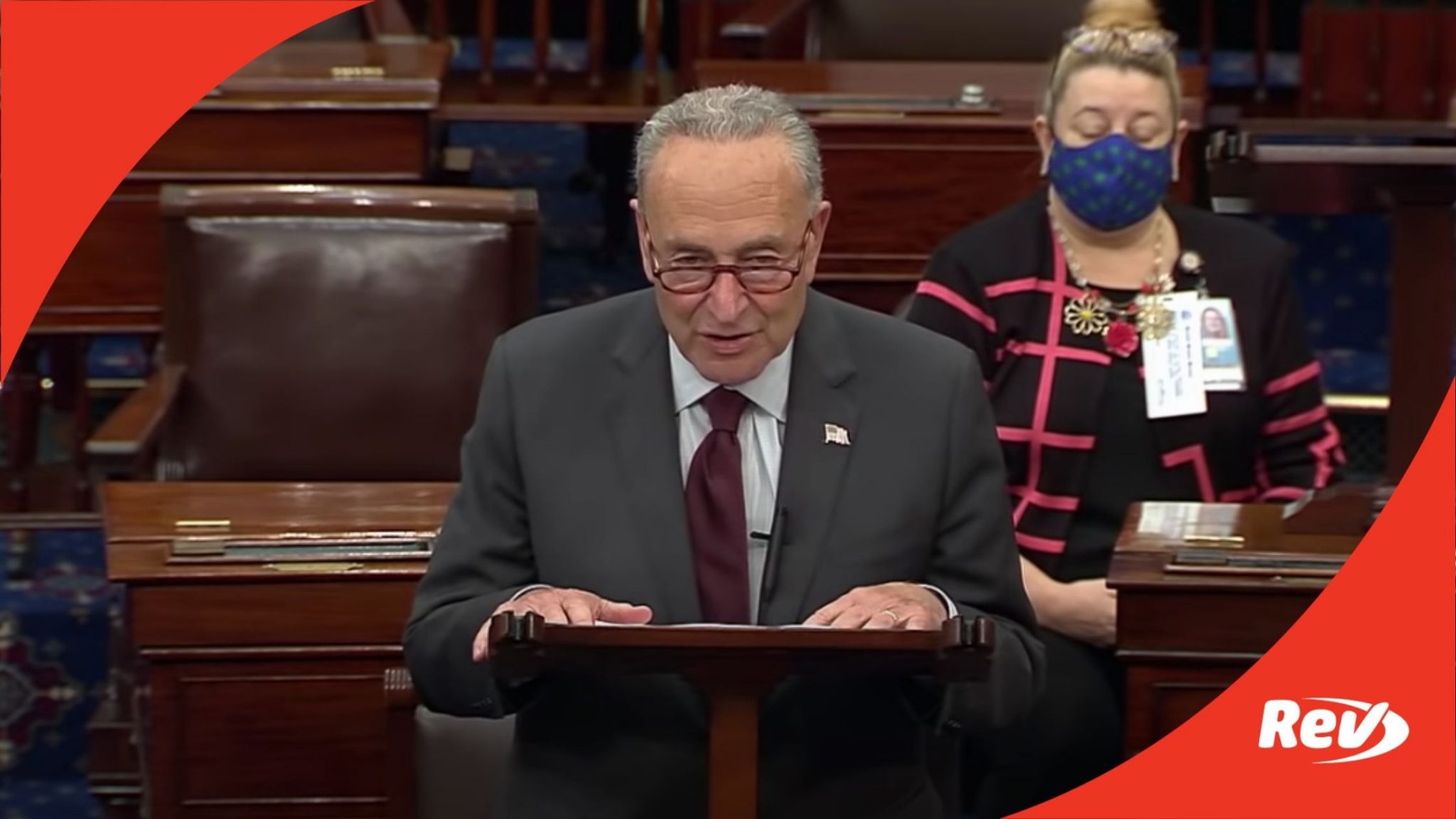 Senate Majority Leader Chuck Schumer spoke on the Senate floor before the vote on the bipartisan infrastructure bill on August 10, 2021. Read the transcript of his speech remarks here.

Chuck Schumer: (00:00)
Is such a fine way and their staffs as well. Now, Mr. President, it’s been a long and winding road, but we have persisted and now we have arrived. There were many logs in our path, detours along the way, but the American people will now see the most robust injection of funds into infrastructure in decades.

Chuck Schumer: (00:26)
In a few moments, the Senate will pass the bipartisan infrastructure bill dedicating over a trillion dollars to strengthen every major category of our country’s physical infrastructure. It’s been a long time in coming. Our economy is number one in the world, but infrastructure ranks number 13. You’ll find better roads, bridges, airports, broadband in the United Arab Emirates than in the United States of America.

Chuck Schumer: (00:59)
Today, the Senate takes a decade’s overdue step to revitalize America’s infrastructure and give our workers, our businesses, our economy the tools to succeed in the 21st century. The bill will make large and significant differences in both productivity and job creation in America for decades to come.

Chuck Schumer: (01:28)
To my colleagues, particularly the group of 10, then 11, then 22, who work so hard in a bipartisan way, congratulations, congratulation on a job well done. Thank you to our committee chairs and ranking members whose expertise was required at several stages and to the staff who sacrificed weekends, family gatherings, and most often, sleep in order to finish this bill. Thank you.

Chuck Schumer: (02:04)
Can we have order, Mr. President? Thank you. Thank you to President Biden and his team at the White House. President Biden has been in office for only seven months, and already the Senate is about to pass the first major infrastructure package in over a decade on a bipartisan basis with his complete and total involvement. Throughout the process, I have tried to prod the negotiators along when they’ve needed it and given them space when they’ve asked for it. At times, it took a deadline to kick negotiations into high gear. Other times, it required a few extra days to allow compromise to gel. But when the Senate is run with an open hand rather than a closed fist, Senators can accomplish big things.

Chuck Schumer: (02:59)
Despite this long road we’ve taken, we have finally, finally reached the finish line. Of course, we Democrats believe we need to do much more. The bipartisan infrastructure bill is a very significant bill, but our country has other very significant, very important challenges. Working families need help. Small businesses need a leg up. Climate change threatens the future of our planet. Our tax code needs to be straightened out. Other parts of our infrastructure not addressed in this bipartisan bill still need focus, attention, and help.

Chuck Schumer: (03:42)
To my colleagues who are concerned that this does not do enough on climate, for families, and making corporations and the rich pay their fair share, we are moving on to a second track, which will make generational transformation in these areas. Once this bill is complete, the Senate will immediately turn to the second track in our two-track strategy, passing a budget resolution that will unlock historic investments in American jobs, American families in the fight against climate change. The two-track strategy is proceeding full steam ahead.

Chuck Schumer: (04:23)
At its core, the Democratic budget, both parts, is about restoring the middle-class in the 21st century and giving more Americans the opportunity to get there. Too many in the middle class are worried about their futures. The sunny American optimism has turned into a sourness and anger, a divisiveness in the land. Bold transformative action on both traditional infrastructure and on helping families, middle-class families, cope, and on climate, will restore that bright, sunny optimism that has been part of this American psyche for centuries.

Chuck Schumer: (05:35)
After we pass the bipartisan infrastructure bill this morning, senators should expect to vote to proceed to the budget resolution. We will begin the process for debating amendments shortly thereafter. Democrats are prepared to move quickly and decisively through the amendment process so we can finish what we set out to do before the end of the work period. The longer it takes to finish, the longer the Senate will be in session.

Chuck Schumer: (06:02)
At the start of July, I set two ambitious goals for this chamber before our August recess. One was to pass a bipartisan infrastructure bill to boost our economy. Something the Senate has not achieved in many years. This is a strong and bold accomplishment. The second was to pass a budget resolution with the kinds of transformative changes I’ve mentioned. Pundits called it wishful thinking in a chamber known for unhurried deliberation. Well, we are moments away from achieving the first goal and I’m confident that very soon the Senate will take the first major step towards achieving our second goal. The Senate is on track to finish both tracks and deliver an outstanding result for the American people.