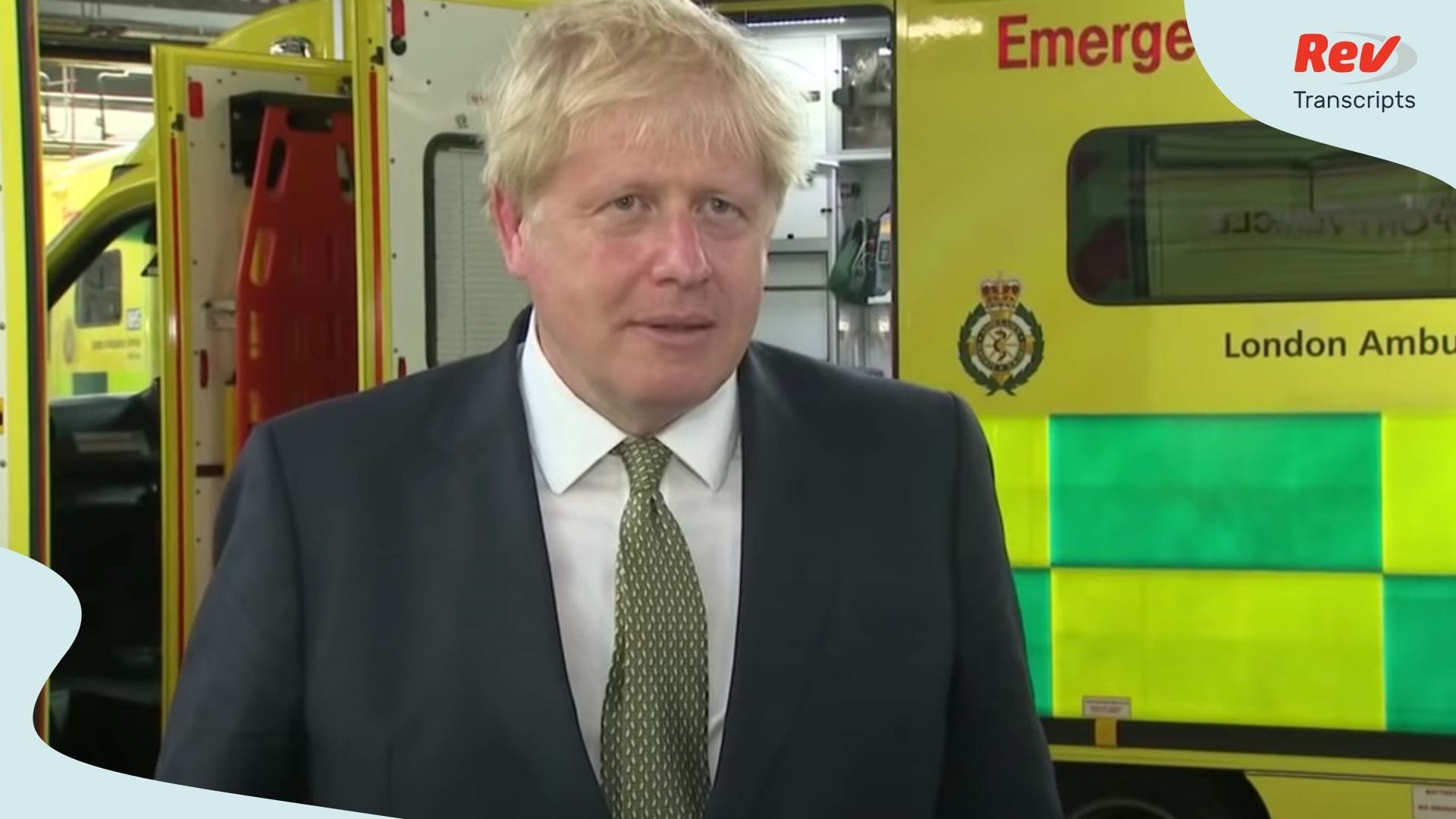 UK Prime Minister Boris Johnson said on Monday, July 13 that he thinks that “face coverings have a real value in confined spaces” and that the government would be making an announcement on masks later this week. Read the full transcript here.

Reporter: (00:00)
The chief executive of the London Ambulance Trust just told you that the number of coronavirus-related cases that they’re still getting [inaudible 00:00:09], I mean, at 20%, it feels very high. Does it surprise you?

Boris Johnson: (00:11)
No, because I think a lot of people, obviously, still worry that they might have the symptoms, and so, quite rightly, they’re calling either 1-1-1 or an extremist, the ambulance service, but you’re still seeing a steady fall in the number of hospital admissions, not just in London, but throughout the country and a steady fall in the number of deaths. So we have got the virus really very much under control across the country, but we need to keep it there, and that’s why we’re continuing to take every possible precaution.

Reporter: (00:46)
So today you are announcing that you plan to be double the sentences for people who insult ambulance workers and other front line public service workers. Has that been a particular problem during the coronavirus pandemic?

Boris Johnson: (00:58)
Well, it’s something that I came to understand and care about very, very much 10, 12 years ago, when I started to run a transport for London, and I became aware of the insults, the aggression that are directed towards people who work in great public service like transport or the London Ambulance Service, or the police come to that.

Boris Johnson: (01:20)
And I really think that our amazing ambulance workers, they do deserve, all emergency services, they deserve proper protection from people who are going to be abusive or racist or prejudiced in any way. And that’s why we’re increasing the sentences, we’re doubling the potential sentence, for those who are violent towards people who are trying, after all, to save their lives.

Reporter: (01:50)
Are you going to make it compulsory to wear masks in the shops in England and anywhere else that it’s currently not [crosstalk 00:01:56]?

Boris Johnson: (01:55)
What we’ve said for a while now is that we do think that masks have a great deal of value. Obviously, they’re mandatory on public transport, on The Tube, but they have a regular value in confined spaces where you’re meeting, you’re coming into contact with people you don’t normally meet. And what’s been interesting on the face coverings issue in the last few months is that the scientific sort of evaluation of face coverings and their importance in stopping aerosol droplets, that’s been growing.

Boris Johnson: (02:34)
And so I do think that in shops, it is very important to wear a face covering if you’re going to be in a confined space and you want to protect other people and to receive protection in turn. Yes, face coverings, I think people should be wearing in shops. And in terms of how we do that, whether we make it mandatory or not, we’ll be looking at the guidance. We’ll be saying a little bit more in the next few days.

Reporter: (03:04)
But should people in confined spaces feel obligated to wear masks? Should it be antisocial for people not to wear masks? Should you give shopkeepers the powers to kick out people who aren’t wearing masks, for instance? Can you speak a bit more about [crosstalk 00:03:17]?

Boris Johnson: (03:19)
Thanks. Well, I think that throughout this crisis, people have shown amazing sensitivity towards other people and understanding of the needs to get the virus down by doing things cooperatively. And I think wearing masks is one of them, in a confined space. What you’re doing is you’re protecting other people from the transmission that you might be giving off, and they in turn are protecting you. So it’s a mutual thing.

Boris Johnson: (03:50)
People do see the value of it. And we’ll be looking in the next few days about exactly how, with what tools of enforcement, we think we want to make progress. But I think as the virus comes down in incidence and we have more and more success, I think face coverings are a kind of extra insurance that we can all use to stop it coming back and stop it getting out of control again.

Boris Johnson: (04:21)
Well, we’ll be saying a little bit more, Sam, in the next few days, but just to be absolutely clear, I do think that face coverings have a real value in confined spaces. And I think the public do understand that.

Reporter: (04:36)
Here in London, the public transport network, City Comms Network, is telling people not to use The Tube and the bus unless they absolutely have to and stay home if they can. Is that logical?

Boris Johnson: (05:19)
And what I want to see is people now who’ve been working from home for a long time, now talking to their employers, talking to their place of work about the steps that have been taken and looking to come back to work in a safe way. In a safe way, and I think that’s got to be the key thing. It’s where businesses have made a huge effort to make the workplace safe. I do think people should start to think about getting back to work, but provided, we all continue to follow the precautions. Number one of which still remains, I mean, it’s not just face coverings. It’s washing your hands.

Reporter: (05:54)
And your government’s making two big Brexit-connected announcements, that not only you spent 30 billion pounds propping up the economy, but today you, as the government, are warning that Brexit might push up costs, whether it’s raining fees or insurance when you go abroad, or there might going to be friction at the ports, and you’re asking people to prepare for that. Why are you making things cheaper with one hand when you’re admitting things could get more expensive with another?

Boris Johnson: (06:21)
I mean, I think one of the amazing things about the last few months, so about the whole COVID crisis, is I think it’s put all those questions very much into perspective. And actually, I don’t think that, I never have thought that, the so-called Project Fear with Brexit would ever materialize in quite the way that some people did.

Boris Johnson: (06:46)
I do think there are big opportunities for this country to do things differently and do things better, but obviously, we have to get ready for the end of the transition period in December, January, and get it done. We’ve come out of the EU. We’ve delivered on that, and we’re going to deliver on coming out to the transition period as well by the end of the year. And all we’re saying is that there will be changes. People should get ready, but there’ll also be great opportunities for this country.

Boris Johnson: (07:48)
Well, I do. And don’t forget, Sam, one of the amazing things that we’ve seen in the last few months is actually there are more EU nationals, I’m proud to say, living in and working in this country than we even thought. And I think the numbers were three million, then 3.2, then 3.4. And we’re seeing huge numbers of people registering for their right to remain, and that’s great. So we have a big, big stock of workers who are helping out this country, who have come from abroad.

Boris Johnson: (08:48)
And on the NHS, what we’ve already said is if people work in the NHS, then they won’t pay the NHS surcharge, and on people working in the care sector, thank forget that this is the government that not only introduced the living wage, but has just put up the living wage by a record amount, and to say nothing of the investments that we’re going to make and have been making in the social care sector. We do want to look after social care. We want to look after people who work in our social care sector, and make sure that they are properly paid.

Reporter: (09:27)
Would you encourage everyone to book a holiday? Should they holiday at home, or should they consider going abroad? And are you good on holiday?

Boris Johnson: (09:33)
I think this is a great, great year for people to have a staycation. This country is uniquely blessed with fantastic places to holiday, whether coastal or otherwise, and I’m certainly going to be doing that, but, I won’t necessarily tell you where at this stage. But, obviously, if people feel the need for a foreign holiday, then that’s completely a matter for them. I totally understand it, but there are fantastic, fantastic places, peerless, wonderful, superlative places in the U.K. to go on a holiday, and that is certainly what I will be doing.