What Are the Benefits of Different Video Formats? (Video Format Guide)

We live in an era in which information is shared faster than it has ever been before. We’ve witnessed the rise of social media. We’ve seen traditional media’s attempts to compete for the attention of a public barraged with information. And, it has been the video format that has, most often, been favored to cross the divide towards the general public. But, with so much video content and with the growth of the industries that help produce it, the public has also come to expect the best quality. Today we will try to have the most popular video file formats explained, their pros, their cons, as well as when and where they can be best used.

Get Captions for Online Videos

What Are the Benefits of Different Video Formats?

Yes, the technology involved in creating videos has evolved over the years. It’s now much easier to film quality videos, edit them and render them to a format that is widely supported. The public has come to expect and demand the best. Why then hasn’t one video format, in particular, emerged as the industry standard?

The short answer is that even though numerous formats exist, the most well known of them have slightly different traits. These make some more helpful than others in certain situations.

For example, some of them are preferred because of various types of video formats quality. Others are popular because of the wide distribution, their compatibility, their technical requirements, or, simply, the difficulty involved with using them.

Here are some of the best-known video formats together with their best and worst traits.

If any format has ever stood in the vicinity of becoming the accepted “industry standard” than that may have been AVI. Short for Audio Video Interleave, the AVI format was developed by Microsoft during the early part of the 1990s.

One of its main advantages has always been the fact that AVI remains very widely supported. This is in no small part due to the fact that, from the beginning, AVI was the default video format for some of the world’s most important camera brands.

It’s also worth mentioning the fact that both PC and Mac devices support the format. The AVI codecs help compress the AVI file size while sacrificing little of the video quality. It’s no wonder why the format has retained its popularity.

While there are few noteworthy shortcomings, it is good to note that uncompressed AVI files are indeed of a very large size. The same codec used to compress the files must be used in order to retrieve and to play them.

And, while Youtube, the biggest video sharing platform in the world, does recommend that its users upload MP4 files, the AVI format is itself supported by the website together with the file extensions MOV, WMV, FLV, 3GP, MPEGPS, WebM, and the aforementioned MP4 (MPEG4).

Get Captions for AVI Videos

The MP4, short for the less catchy title of MPEG-4 Part 14, is an extremely popular video format that was greatly inspired by the QuickTime File Format. Much of its current notoriety can be attributed to the fact that it was developed and, later, used to great effect by Apple. In fact, the MP4 format was embraced by the iTunes platform at was arguably the Apple company’s peak in terms of worldwide notoriety.

One of its main advantages is the fact that the video format is used on numerous video players besides iTunes, such as VLC, Windows Media Player, or GOM Player. Therefore, MP4 files will play on the majority of well-known media players.

Being championed by the behemoth video-sharing platform that is Youtube has no doubt helped. But, the support is justified by what the format has had to offer. For example, closed caption file formats, which help with the video subtitles, can be easily integrated over an MP4 video.

The quality is also beyond reproach. The MP4 format is helpful in streaming video over the internet while losing little of its quality in the process. MP4 files are able to produce videos of near DVD like quality and the format is compatible with most modern technology. Video sharing platforms often actively encourage users to upload their files in MP4 format for these very reasons. Besides this, the fact that it supports 3D objects make it of great use in developing presentations.

While few, one of the downsides of using this format has to do with the process of editing these types of files. It is not infrequent for MP4 files that are imported to cause the video software to crash. Therefore, while the MP4 format may sit at the top of the list in a number of areas, it can hardly be referred to as the best video format for editing.

Together with avi, mp4 has been the most widely spread file extension for several years. This bares the question. Which one is of better quality, AVI or MP4? While the race is narrow and yet to be fully run, MP4 may slightly outrank the AVI format. This is because of the fact that the MP4 format does include a number of more modern features that the older AVI container was simply not designed to have.

Get Captions for MP4 Videos

With its development stages sponsored by tech giant Google, the WEBM format was created with the distinct goal of being used on websites. And, so it did. When used together with HTML5 specification, WEBM creates videos of very small file sizes. This greatly simplified the streaming of the videos. And, in many ways, for several years, it changed the manner in which numerous websites were designed.

First of all, WEBM is an open-source, royalty-free format. It is widely used for HTML5 and Chromecast. It produces good quality videos and it is widely used on many popular websites such as Youtube and Wikimedia. And, while mostly used for video streaming, WEBM can also be edited in video software tools such as Corel VideoStudio. In fact, WEBM is still used by some of the best free editing software.

The obvious drawback with the format has to do with its decline in popularity which has coincided with the performance improvement of many platforms. Also, web browsers such as Mozilla Firefox and Google Chrome do not support it and WEBM files cannot play on a wide variety of portable devices.

Get Captions for WEBM Videos

An acronym for Advanced Video Coding, ACVHD is the creation of giant electronic companies Sony and Panasonic who partnered for the development of this video format. The goal was to create a file-based format that would allow the playback of high-definition video. It was widely considered to be a success. As a result of the high visual standard it offers, it has long been the go-to standard for pro videographers.

AVCHD is the video format used for a number of high-end hardware products including those manufactured by Canon, Hitachi or Sony. Another advantage of AVCHD is that it supports 3D videos.

Although of a high technical standard, AVCHD is not quite as widely supported as its closest rival, the MP4 video format. Also, it does not support the very popular 4K format. And, getting the videos from your camera onto your computer for editing may prove to be a slower process than with other formats. Still, professional video editing software has tended to take a shine towards it over time. 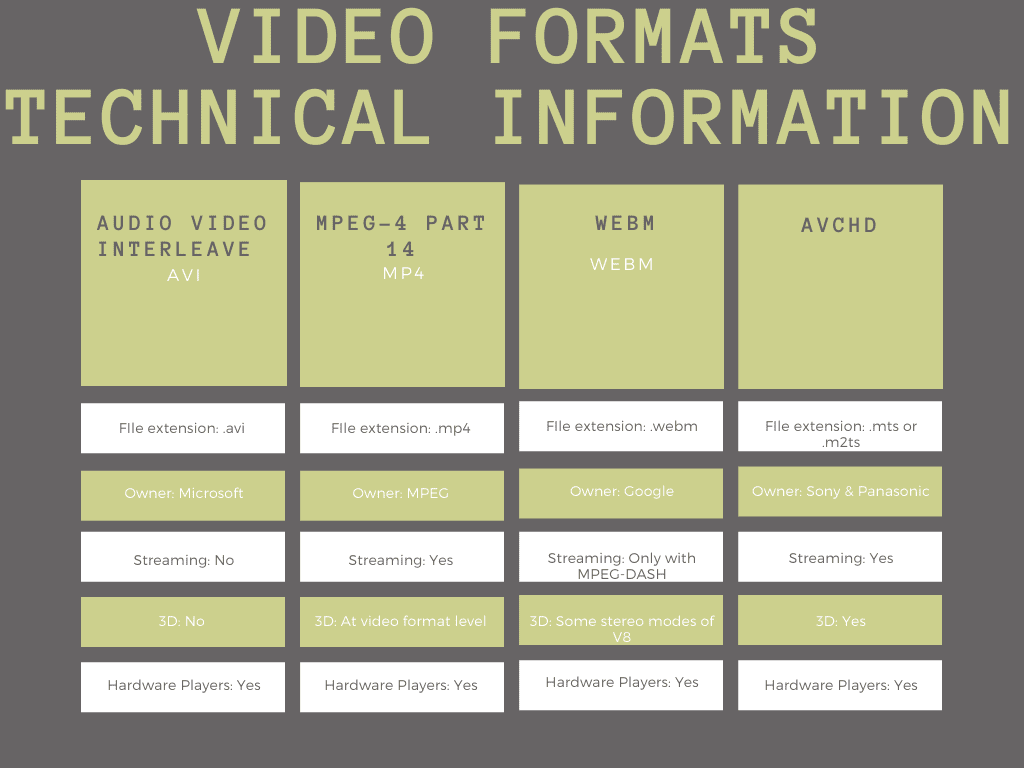 FLV, short for Flash Video Format, is the container file format created to be used in conjunction with the computer software Adobe Flash Player. Essentially, the goal of the video format is to facilitate the simple delivery of high-quality video format over the internet.

The great thing about Flash is that it comes to the help of websites looking to add animation and interactive content. The process is simple and, ultimately, can be of great effect. In its heyday, Flash was also used for simple games.

The downside, of course, stems from the fact that the FLV format has come to be less and less popular in recent years. Creating FLV content can take up a lot of time and be rather costly. Another downside is the fact that Flash content cannot be played on devices using iOS, greatly restricting its potential to gain new fans.

The MOV or QuickTime file format was developed by Apple specifically with the target of it being used by those seeking to easily edit videos. The movies created could be separated into numerous tracks that allow the storage of different types of data.

Its greatest asset is its simplicity. The MOV format benefits from a smooth, attractive design that should help even its newest users edit their videos to a high standard. Furthermore, MOV can also be easily used in conjunction with other formats.

Some of its drawbacks, however, have to do with the relatively large files it creates as compared to formats such as AVI. In some ways, MP4 can be seen as a descendent of the MOV file, using similar lossy compression standards. This fact usually makes it a more preferable option to its descendant.

Get Captions for MOV files Online

When Microsoft developed Windows Media Video (MPV) their belief was that the new format would come to dominate the world of online video streaming. Its connection to the Windows brand has certainly increased its visibility.

WMV’s biggest talking point was the drastically reduced size of saved files which could be easily transferred through means such as e-mails.
Also, as it is frequently used to store video files in the world’s most popular operating system, Windows, other programs also make use of it for short animations.

On the other hand, the main disadvantage with the small WMV files is the way in which the image quality is retained after compression. Furthermore, as the video format was created with Windows in mind, it is not easy to find media players capable of running WMV files in other operating systems.

Get Captions for WMV files Online

MKV, short for matroshka (a reference to the Russian traditional stacking dolls) aims to be an open-source competitor for video-formats such as AVI or MP4. It was developed by MCF (Multimedia Container Format) and received its big break in 2014 when Windows announced plans to support the MKV format out of the box and offer technical support for it.

MKV files can support lossless quality and the single files can contain an unlimited number of images, videos or audio. Since it is an open-source project, it supports a variety of available codecs.

While it doesn’t have too many outright issues, Matroshka is still not widely supported, the project is still in its initial stages of evolution and it is considered by many to be more complicated to use than AVI or MP4. 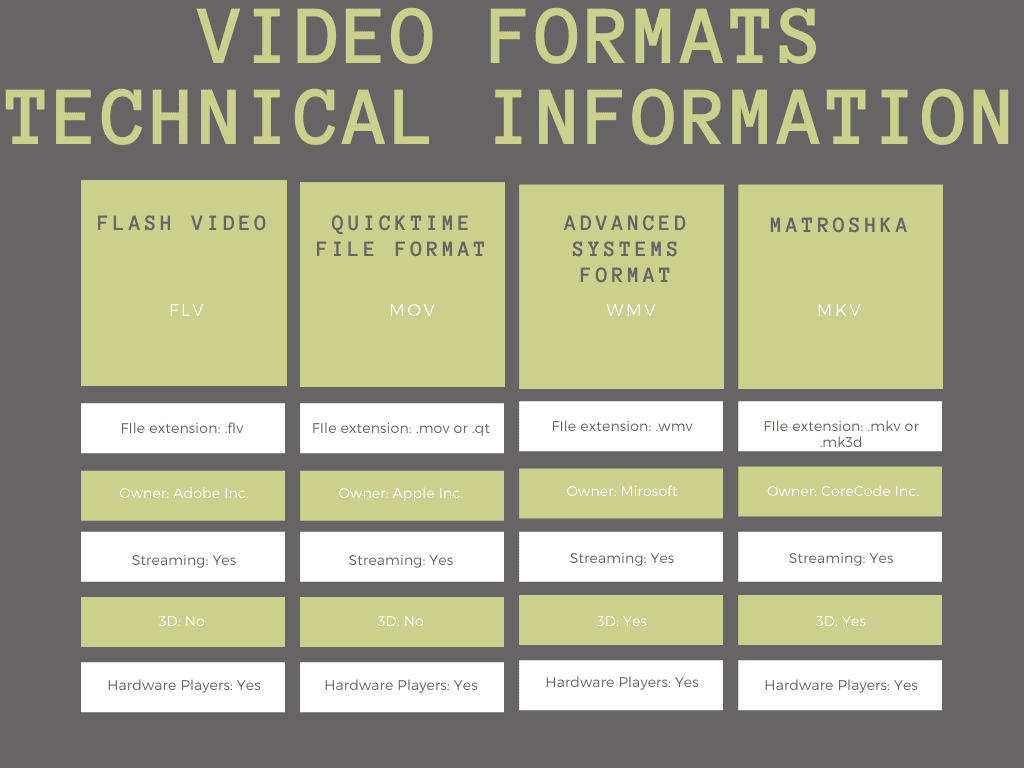 Conclusions: What is the best video format for you at the moment?

Which video format is the best quality? The word is still out on one video format to stand before all others. This is because simply put, the various video formats take care of different consumer needs. Having said that, some of the formats we analyzed start the race with a tiny advantage, being tailor-made for one particular use.

All in all, there has not been one single video format that has become an industry standard for the very reason that they can, usually, be distinguished from one another through the issues they solve. And, while technology will no doubt improve, leaving consumers demanding ever increased standards, many of the most popular video formats currently will remain of considerable importance for years to come.

Get Captions for Online Videos