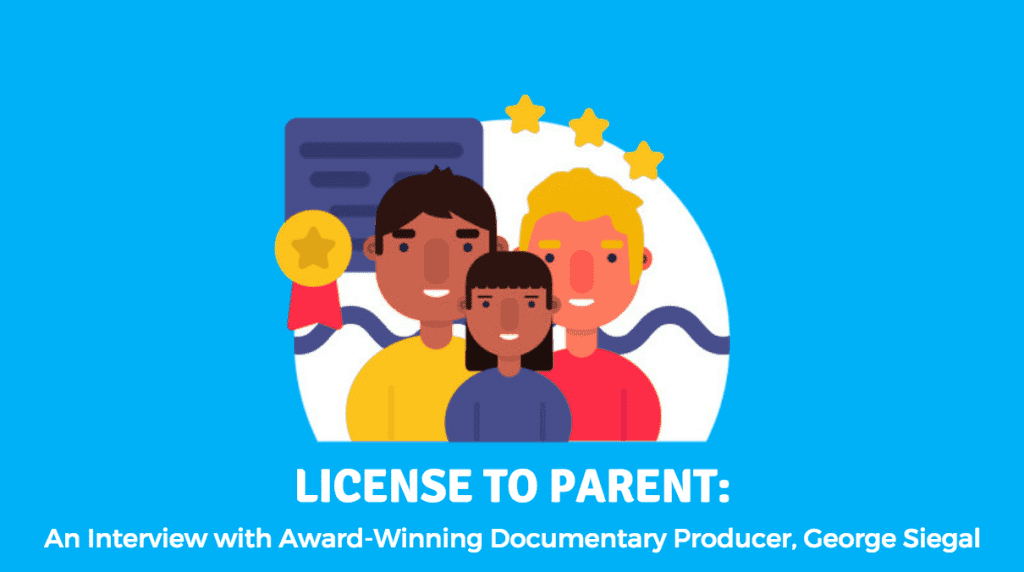 From driving a car to running a business to even hunting and owning certain animals — in today’s society, we often need a license, or at least significant training, when it comes to taking on anything of importance. But what about when it comes to parenting? Shouldn’t there also be stipulations for arguably one of the most significant roles a person can take on in life?

Asking this question in his award-winning documentary License to Parent, filmmaker and producer George Siegal explores how raising the standard of parenting not only has the power to improve the lives of individuals, but also the world as a whole.

We sat down with Siegal to discuss his inspiration behind his latest film — the first project in his newest venture Move the World Films, Inc.

Here’s more from our Q&A:

Rev: You actually started your career in front of the camera as a newscaster, sportscaster, and weathercaster. What was the catalyst in making the switch to a role behind the lens as a producer and filmmaker?
George Siegal: I got sick of TV news. It’s so condescending and aims down to the audience on a daily basis. I didn’t enjoy the hype and the sensationalism that they try to generate. I figured I’d rather control my own destiny by doing other things that are more creative and that might actually do some good in the world.

When did you start your company Move the World Films?
We just started Move the World Films back in March, and I’m excited about it! The goal is not to make money with the films, but to make films that go out and do something. We’re trying to improve the world one film at a time.

What led you to create your organization’s first film, License to Parent?
I have five kids and I think that parenting is the most important job in the world, yet we let anybody do it without any requirements whatsoever. I just think that’s crazy. I’m not advocating actual licensing for parents, but we don’t do enough to support and prepare them to do this job that shapes the world, and that’s a problem.

I’m curious, you said that you don’t think people should necessarily have a license to parent. Is your thought to have education and classes accessible to more people everywhere?
Absolutely. In a lot of cities and states, they do have privately funded programs and they’re mainly available to lower income families. Troubled parenting is not specific to people that are poor; there are a lot of people that are poor that are terrific parents. I believe there should be parent education for everybody — whether you’re making a million dollars or ten thousand, you should have access to information to do your job better.

Why did you feel it was imperative to cover this story?
If we wait to do something, we’re wasting generations of children that are raised in situations that are going to be problems for them and for society. One of the main voices in the film, Dr. Jack Westman, gave the statistic that if you raise a healthy, normal child, it’s worth $1.4 million to society over the course of a lifetime. But if you have a child that has problems, it costs society $2.8 million. He said that if we can solve the parenting problem in this country, we could fix the national debt. It’s that big of a problem.

Does your film offer specific solutions to address this problem?
Yes, I think we offer some very viable solutions, such as teaching kids life skills in school so they become more knowledgeable about respecting others. Ultimately, that leads to them being better parents when they have a family of their own. The early childhood family education program that started a number of years ago in Minnesota is a great example of a state that actually started this.

There’s also a program in San Antonio called AVANCE that’s privately funded and they teach parenting classes, and there’s a program in Florida called Help Me Grow that gives a phone number if you need help. And one of the things we’re working on right now is a parent pledge.

What exactly is a parent pledge?
It doesn’t have any legal standing, but a parent would have this document that they read before they leave the hospital with their child that helps them acknowledge the lifelong responsibility ahead of them — providing food, and shelter, and support.

They can go back to the document and ask, “Am I doing that? Am I staying on point? Am I having dinner with my child every night? Am I asking them what they’re doing at school and who their friends are? Are they having any problems?”

If you look at people that go on all those reality shows and all of a sudden the spotlight is on them, and a lot of them wilt under that kind of scrutiny. As a producer, I don’t like to do that to people. I like to be very understanding in saying, “This is going to be the film. A lot of people are going to see it. You need to be okay with that. If you’re not, you shouldn’t do it.

In the process of making the film did you use a transcription service at all to help streamline the process?
We did. It’s important for a producer. When you do hours of interviews, it’s hard to log them. And when you transcribe them, it really needs to be done well because you don’t go back and look at it right away. You’ll see the sound bite and go, “Wow, this is really good stuff,” but if the transcriber didn’t transcribe it the right way, then you’re putting something potentially in your film that once the editor gets it, is going to go, “Wow, that doesn’t say what you said it was going to say.” That process can really bog you down and cost you a lot of money.

Ultimately, what do you want viewers to take away from this film?
I’d like them to take the job of parenting more seriously and to realize that they should always be doing things to try to improve. I don’t claim to be a great parent. I’m not sitting here saying, “Well, I’m making this film because I want everyone to be like me.” I want everyone to be better than I am.

Do you feel that by making this film, it’s given you a better grasp on your role as a father of five?
I feel like it’s made me realize my shortcomings and the depth of this job. You can’t get bogged down with the rest of your life and not take it as seriously, because it may be more important than anything else you’re doing.